Iraqis are making sure social networking sites can be used to mobilize the public and express opinions against political events and decisions. 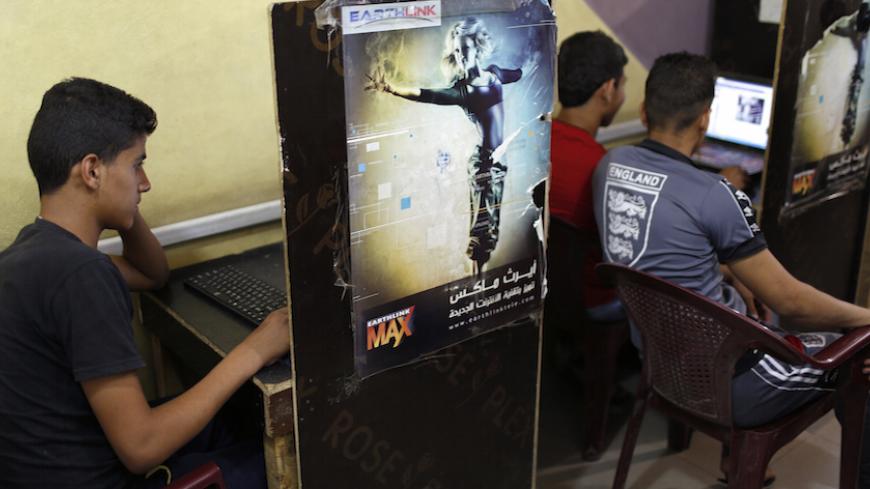 Iraqi youths use computers at an Internet cafe in Sadr City in Baghdad, May 3, 2014. - REUTERS/Ahmed Jadallah

BABIL, Iraq — Social networking sites in Iraq are turning into a real pressure tool on government decision-making centers. This became obvious April 28 when activists and bloggers started a media campaign on Facebook against the Iraqi government for failing to save the soldiers stationed at the Nazim al-Tharthar dam located 100 kilometers (62 miles) north of Baghdad. The Iraqi soldiers were attacked by the Islamic State (IS). Media reports said that about 150 were killed in the attack and that soldiers had been besieged for 16 days.

The Iraqi government, represented by Prime Minister Haider al-Abadi, denied the news circulating on social media that the dam fell into the hands of IS, and that the soldiers were trapped there.

Social networking sites have a significant impact on the politics in Iraq, which is proven by two important events: the Iraqi government’s decision in early June 2014 to censure social media in all parts of the country, including Twitter, Facebook and WhatsApp, following the escalating security tension, and when Khaled al-Mafraji, the member of parliament for the Coalition of National Forces, a Sunni bloc, accused the State of Law Coalition April 30 on social networking sites and in the media of a systematic campaign against Defense Minister Khaled al-Obaidi.

On April 26, activists and citizens used Facebook to call for demonstrations to oust Obaidi and try him for the Nazim al-Tharthar massacre. Iraqi member of parliament Aliya Nassif said in an April 25 press statement that 50 soldiers were killed during the Nazim al-Tharthar incident after IS members trapped them on the site.

Writer-journalist Abbas al-Yasiry, a member of the Iraqi Media Network’s secretaries body, told Al-Monitor, "Social networking sites have become a double-edged sword. While they are used as a lobbying tool on the government and decision-makers to rectify mistakes, they also have negative effects as they contribute in spreading inaccurate security stories, which negatively affect the fighters — especially when these stories are filled with humane and nationalistic emotions."

Activists did not give up in the face of the decision of censorship, and on July 8, 2014, they resorted to electronic means to stop the censorship imposed by the government on several websites, as this move was a threat to freedom of expression and opinion.

Writer and social media activist Mansour al-Nasser talked to Al-Monitor about the necessity to constantly pressure and closely monitor the government through social networking sites. According to Nasser, the monitoring and pressure are not organized or efficient enough to influence the government’s strategies.

Nasser called on bloggers “to organize their activities in a more efficient way.”

Iraqi bloggers and activists succeeded in organizing political campaigns on Facebook and Twitter, which reflect their own opinions regarding many government decisions and activities. In 2011, activists on Facebook launched a campaign supporting the Arab Spring protests against former Egyptian President Hosni Mubarak.

On Oct. 19, 2014, Iraqi activists used social networking sites to call for “saving the displaced in conflict areas in Iraq from the harsh cold and rain.”

In his interview with Al-Monitor, journalist Hadi al-Assami said that the bloggers' and activists’ interaction with the political events is “a healthy activity," but that "correct information should be checked and separated [from stories that are fabricated].”

Observers of Iraqi social media accounts say that these accounts have been excessively used on the political level by parties and their supporters; one may find a page backing Abadi, and another supporting former Prime Minister Nouri al-Maliki. Also, bloggers created a page to support the Popular Mobilization Units, which are fighting IS alongside the Iraqi army. Other activists created a page titled “Iraq’s Sunnis,” in which they accuse the Popular Mobilization Units of killing residents in the Sunni areas where the fighting is ongoing, such as Tikrit and Diyala province.

In light of this media conflict, Iraqis organized on social media a campaign called “No to sectarianism,” which calls for unity and rejects conflicts and mutual accusations.

In an interview with Al-Monitor, blogger and social media activist Shabib al-Medhati pointed to the presence of several fake accounts on social networking sites that stir hatred and sectarianism by spreading rumors and instigating religious disputes.

On Feb. 7, an Iraqi court issued a first-of-its-kind sentence against an Iraqi blogger on charges of defamation and slander on Facebook. Consequently, questions arise as to whether bloggers and media activists are able to overcome the attempts to stop them from influencing the political situation, by restricting freedom of expression.

However, journalist and Facebook activist Tarek Hussein told Al-Monitor, “Iraqis will make sure social networking sites remain an open window for expression and mobilization of the public opinion against political events and decisions.”