The decision to freeze the funds of Egyptian soccer player Mohamed Aboutrika for his alleged affiliation with the Muslim Brotherhood has raised the ire of Egyptians regardless of political leaning. 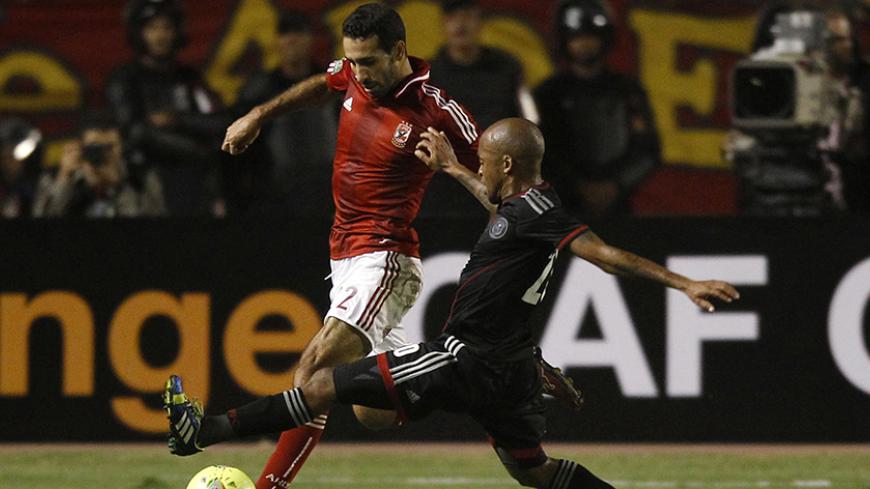 CAIRO — An uproar over social networking sites has been sparked by the committee tasked with managing the Muslim Brotherhood funds, when it issued a May 8 decision to freeze the funds of Egyptian soccer star Mohamed Aboutrika on charges of belonging to the Muslim Brotherhood. Wide popular sectors, including supporters of the June 30 revolution, have consequently rushed to show solidarity and sympathy with the player.

Aboutrika enjoys sweeping popularity among Egyptians and Arabs in general, not only for his unique soccer skills, but also for his good morals and great humanitarian positions. Arabs will never forget his January 2008 stance on the blockade imposed on the Gaza Strip. Trying to draw the attention of the world to the suffering of the Palestinian people, he wore a jersey printed with a Gaza solidarity logo during the game against Sudan in the Africa Cup of Nations in 2008 in Ghana. Though the move could have led to sanctions by the African Union for using political slogans during a sports game, Aboutrika went through with his decision to draw the world’s attention on Gaza, in a game widely covered by the media.

Aboutrika also refused to shake hands with the chairman of the Military Council, Field Marshal Mohamed Hussein Tantawi, who ruled Egypt after the January 25 Revolution, during a meeting with the Al-Ahly players at Almaza military airport. His refusal came in response to the massacre at Port Said stadium on Feb. 1, 2012, which claimed the lives of 72 people from Al-Ahly, the biggest tragedy in Egyptian sports. After the football match between Al-Ahly and Al-Masry, Al-Masry fans rushed to Al-Ahly’s bleachers and attacked the fans. The security forces, tasked with keeping order during the game, closed the exits. Forensic doctors' reports confirmed that some of the victims were shot to death and others were stabbed, and many pictures proved that the security forces were involved in the massacre. Notably, during the game, Al-Ahly fans were shouting slogans against the military rule.

Aboutrika was there when the bodies of the victims of the heinous Port Said massacre arrived. According to Aboutrika, this event was a plot to against the hard-core Ultras, which opposed the military junta rule.

The unprecedented sympathy that has been shown to the player on several foreign and local levels, as well as the global and local media attention, has not been seen in the region since the case of Mohamed Bouazizi in Algeria or Khaled Said in Egypt, who helped ignite protests that turned into revolutions. In all these examples the uniting factor was widespread sympathy over injustice. It is this same sympathy that the people feel with Aboutrika.

Aboutrika’s main crime, according to a statement issued May 8 by the committee tasked with running the funds of the Brotherhood, is his co-funding of the tourism company Asshab Tours with Brotherhood leader Abdul Karim Fawzi. The company manager, Anas Mohamed Omar al-Kadi, is one of the Brotherhood's criminal elements and is currently imprisoned following charges in the criminal court of Bab al-Sharq for hostile acts against the state in 2013. Kadi is accused of diverting company funds to finance terrorist operations.

Yasser al-Qadi, the secretary-general of the Union of Egyptian Representatives, which includes 170 parliamentarians from different political groups, told Al-Monitor, “When the union contacted [soccer] captain Aboutrika, it learned that he bought the company from a person who later turned out to be a Brotherhood member. This company is a partnership established on Dec. 27, 2012, and Aboutrika bought it and registered it in his name in the commercial registry on April 11, 2014. According to security investigations, the terrorist acts funded by the company, such as the violence in Bab al-Sharq in Alexandria, were carried out on Aug. 16, 2013, meaning before Aboutrika bought the company.”

Qadi sarcastically suggested that a new box on the Egyptian national ID card should be dedicated to ideology, to clarify citizens' ideological affiliations before they conduct business or decide to get married. He pointed out that the Union of Egyptian Representatives is against what is happening with Aboutrika, and it has issued a statement to the effect that despotism is as bad as terrorism, and the state's selectiveness in dealing with citizens will lead to serious consequences for the nation.

Qadi added that the state-affiliated committee’s freezing of funds based on administrative decisions and without involvement by a criminal court is reminiscent of the Brotherhood’s alleged lack of respect for the law and the constitution.

“What raised the public ire is that millions of ordinary Egyptian families, which have nothing to do with politics, believe that Aboutrika is a good example, and hope that their children will grow up to be like him. Those families felt that one of their sons was treated unjustly. Add to this sports fans in Egypt in general, and the Ultras club specifically, to whom Aboutrika has always brought joy,” he said.

Qadi pointed out that what the state is doing now offers logistical support to the Muslim Brotherhood, increasing the gains of this organization at both the domestic and foreign levels.

For her part, Laila Suef, a university professor and political activist known as Umm al-Mounadilin (Arabic for "mother of strugglers"), whose three children are currently in Egyptian prisons on political charges, told Al-Monitor, “People are dealing with the issue of Aboutrika — for the first time in a long time — away from the existing sharp polarization. People from different political currents are not dealing with Aboutrika as a Brotherhood member, but as a symbol of humanity, given his multiple positions. Aboutrika has recently spent his money on the families of prisoners who were arrested over political issues, as they have no source of income."

Suef pointed out that what is happening now shows that the authorities in Egypt and their associates lack general societal values. The use of pro-authority media to insult Aboutrika and point out his poor origins in a country where 40% of citizens live below the poverty line makes citizens feel that the state is punishing one of them, especially considering that in Aboutrika’s case, the people are not convinced of the evidence provided by the committee tasked with running the funds of the Brotherhood.