Nearly 16 months since the announcement of $3 billion in Saudi military aid to Lebanon, the first weapons shipment from France has already disappointed. 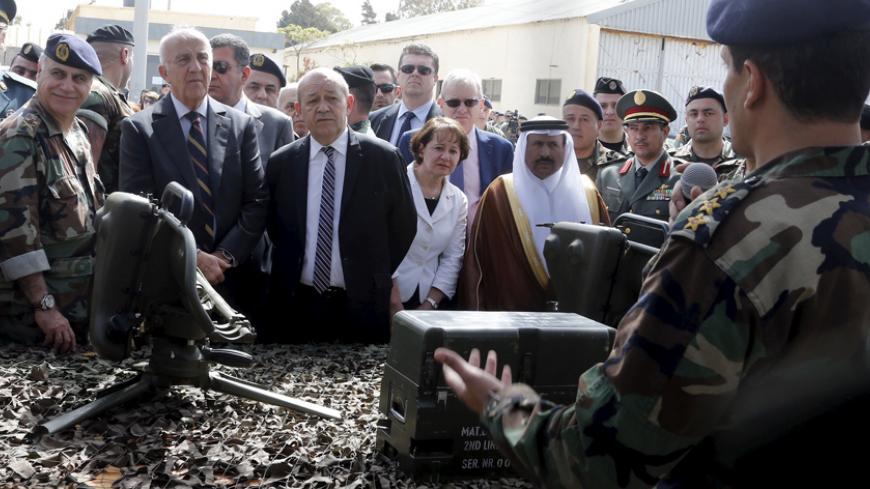 Some 16 months after the December 2013 announcement of the Saudi donation to buy French weapons for the Lebanese military, the first shipment finally came on April 20. However, it seemed awfully modest compared to what had been promised. More importantly, it was much less than what the Lebanese military urgently needs.

It all started during a news conference by Lebanese President Michel Suleiman on Dec. 29, 2013, when he announced that Riyadh had decided to offer the Lebanese military $3 billion, to be allocated for the purchase of weapons and ammunition from Paris exclusively.

After his Oct. 7 meeting with French President Francois Hollande, former Lebanese Prime Minister Saad Hariri announced from Paris that the delivery of weapons promised in the infamous deal would begin within days.

Those days turned into six months, until French Defense Minister Jean-Yves le Drian finally arrived in Beirut on April 20 with the first shipment of the promised weapons.

However, the first surprise was the limited quantity and quality of that first shipment. The French gave Lebanon only 48 Milan anti-tank missiles. The subsequent shipments would be delivered later, said le Drian, who gave no specific dates. Media outlets in Beirut reported the information, with Al-Mustaqbal explicitly noting, “The delivered French missiles were taken from the French arsenal, due to the crucial need for these weapons by the Lebanese military.”

However, this claim was denied by a Lebanese military source who asked to remain anonymous. He told Al-Monitor that, over a year ago, France had offered to provide Lebanon with the missiles, but the Lebanese authorities expressed reservations. The source explained that it was better to refuse the offer because such missiles are not really needed. Also, the Milan missiles were not new, but of the model’s previous generation, of which the Lebanese military already had enough. Despite all this, only these old missiles were delivered April 20.

As for the Lebanese military’s current basic needs, the source told Al-Monitor that they’re far from being anti-tank missiles. Lebanon's main confrontations are with the terrorist groups at its eastern borders, and these groups do not use any sort of tanks and armored vehicles. The source added that the second surprise in the French minister's visit to Beirut was the obvious disparity between the weapons and ammunition that Lebanon had requested and the promises made to Lebanon today. The differences between the Lebanese request sheet and the delivery lists promised by the French are quite significant.

The source reiterated Lebanon's need for eight to 10 Gazelle helicopters equipped with launch pads and missiles, armored personnel carriers equipped with machine guns, Super Puma helicopters to transport troops (with a capacity of about 20 soldiers), an Mk3 air defense system connected to a network of Crotale missiles or shorter-range Mistrals, a MIKSA border-monitoring system and a radar system including sensors, radars and alarm networks.

This list represents the Lebanese military’s current needs in confronting the terrorists on the eastern border. Transport helicopters are needed to transport troops to those difficult rural areas and combat helicopters to fight militants by air, as well as border monitoring systems, which are a top military priority for Lebanon today.

According to the source, the French list, which was announced in Beirut on April 20 and will take up to 2018 for delivery completion, includes entirely different weapons, such as Sherpa and VAB Mark III armored vehicles, 24 cannon shells with a 155 mm range, mortars, anti-tank missiles and seven Cougar helicopters, which are less effective than the Gazelle and Super Puma. Also listed were three Combattante FS56 gunboats, which are very expensive and consume the bulk of the $3 billion donation. The source noted that not only does Lebanon not really need them, but its military harbors cannot contain them. These weapons are expected to start arriving in late 2017 and early 2018.

Meanwhile, the Lebanese military continues to engage in battles against terrorists, and a close battle is expected to break out in the next few weeks on the eastern border.