Palestinians join ICC, but will they file complaints?

While joining the International Criminal Court is indeed a diplomatic achievement for the Palestinians, filing complaints against Israel could bring them countercomplaints and other punitive measures. 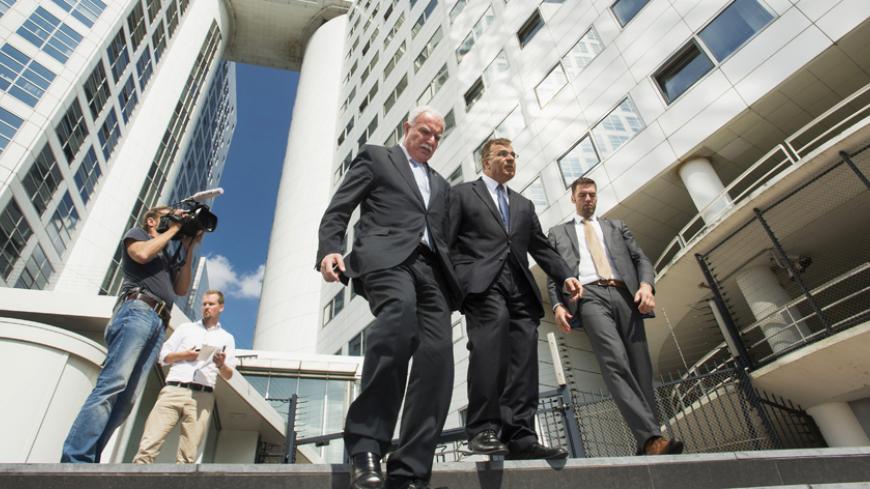 Reacting to the admission of the Palestinian Authority (PA) as the 123rd member of the International Criminal Court (ICC) in The Hague, Saeb Erekat, who chaired the Palestinian negotiation team with Israel, said April 1, with unabashed satisfaction: "This is a national historic day." Since the derailment of the peace talks with Israel, senior Palestinian leaders have used every opportunity to brandish the ICC weapon. Recently, following the results of Israel's March 17 elections, they have been much more vocal about it. Reacting to Prime Minister Benjamin Netanyahu's re-election, Erekat, Jibril Rajoub and other Palestinian seniors reacted by saying that the Palestinian response would be given at ''the ICC."

Having talked with some of the Palestinian leaders, I discerned delight in their voice in view of the fact that senior Israeli defense establishment officials are apprehensive (so they claim) of what might transpire, now that the PA has become a full-fledged member of the ICC. "Why are the Israelis afraid of the ICC?" asked Rajoub. "Who's afraid of going to court? Only the felon, only the criminal. Are you war criminals? If you are, you should be worried," Palestinian officials said.

This week, the talk and economic sanctions by Israel to dissuade the Palestinians from taking this step came to an end. In tandem with unfreezing Palestinian tax funds, which were originally held off because of the January appeal to the ICC, the PA was inducted into the UN legal organ. Now senior PA officials feel that they have made another step toward the establishment of a Palestinian state.

After a short ceremony in The Hague that was attended by Riyad al-Malki, the PA's foreign minister, the membership went into legal effect, giving senior PA officials an opportunity to move from threats to action. But before long, it turned out that senior PA officials prefer to hold the ICC sword as a sign of a diplomatic victory — impressive as it may be — instead of using it at this stage. In other words, PA President Mahmoud Abbas, Erekat and Rajoub are pleased with just relishing the fact that they are members of this exclusive club. Yet at the same time, they're making the cost-benefit analysis. Won't lawsuits for war crimes elicit similar suits from Israeli organizations that would lessen the sting of the Palestinians' constant threat?

The journey to become an ICC member started immediately after the PA's resolution at the UN Security Council on Dec. 30, 2014, to establish a Palestinian state did not pass. In the wake of its bitter disappointment, the PA chose to appeal to the ICC, not just as a default, but rather as means to placate Palestinian public opinion. It hopes to persuade the Palestinian public that the diplomatic intifada is the best weapon of Abbas and his team to achieve national goals.

As soon as the journey toward UN institutions began, senior PA officials said that they would not waste as much as a single day and that as soon as their membership was approved, they would file lawsuits against Israel and senior defense establishment officials, citing war crimes committed during Operation Protective Edge in the Gaza Strip in July-August 2014. However, senior PA officials lay blame for the bloodbath in Gaza also on the Hamas movement and the leaders of its military wing who exploited the population there. So while PA leaders threaten to slap Israel with lawsuits, Abbas complained at the March 28 Arab League summit in Sharm el-Sheikh that the Arab countries did not work jointly as an Arab military force to solve the Palestinians' internal conflict, namely Fatah-Hamas. Mahmoud al-Habash, Abbas' close associate, was even more trenchant, saying that the Arab countries had to rally and smite Hamas with an iron fist.

When Abbas and his associates complain about the 2007 coup in the Gaza Strip and the conditions of the residents there as a result of Hamas' rule, there is no basis to sue Israel while at the same time exempting Hamas from any responsibility. This is what senior PA officials have been saying in closed meetings and off the record. In public, however, they enjoy the feeling that they now have a diplomatic sword with which to threaten Israel, while placating the Palestinian public that feels that the government in Ramallah is not doing enough to stop Israel's actions.

And this is precisely what Abbas did this week. When Israel announced that it was unfreezing the tax funds and would transfer the money only after deducting the debts to Israel Electric and the national water company, Abbas, at the Fatah Central Committee in Ramallah, quickly threatened that if the debts were deducted without Palestinian oversight, he would turn to the ICC. This contradicts the assumption that any process at the ICC can take years, and fails to take into account the possibility that the court might refuse to address such a complaint. However, Abbas feels that he has a new diplomatic weapon at his disposal. Even if this weapon might not be practical, or even if Abbas does not plan to actually use it, he can at least gloriously wave around the new sword, boasting about it in front of his people.

By contrast, other issues with regard to which the Palestinians are sure they can elicit interest and sympathy, particularly among the international community, are the construction in the settlements, land appropriation from Palestinians and damage to Palestinian residents inflicted by settlers in what is known as "price tag" attacks.

But even when it comes to these highly charged subjects, Malki was quick to lower the expectations of West Bank residents. In a press release that Malki published on the eve of the PA induction to the ICC, he wrote the following: "I do not want to let my people down, but the procedures at the ICC are long and slow and we might run into difficulties and challenges that could last for years." He then went on to say that this is just one step, and that "we are committed to making complementary efforts, including Palestinian reconciliation and reunification of Gaza and the West Bank."

In fact, the cat is out of the bag. The appeal to the ICC is only but one small step in the long journey to the UN Security Council. At this time, the Palestinians apparently prefer not to waste any unnecessary resources and energy on endless hearings at the ICC, risking sanctions and a money freeze from Israel that will put the PA in jeopardy. It is possible that the frequent threats to sue Israel will remain in the vernacular of senior PA leaders, but everyone understands that injudicious use of the ICC will deflect the sensitive diplomatic battle to another court where a marginal game is playing out.