In an interview with Al-Monitor, Maj. Gen. (Res.) Amos Yadlin claims that Israel should not panic when faced with the Iranian agreement, but focus on clarifying several of its clauses and rehabilitating ties with the United States. 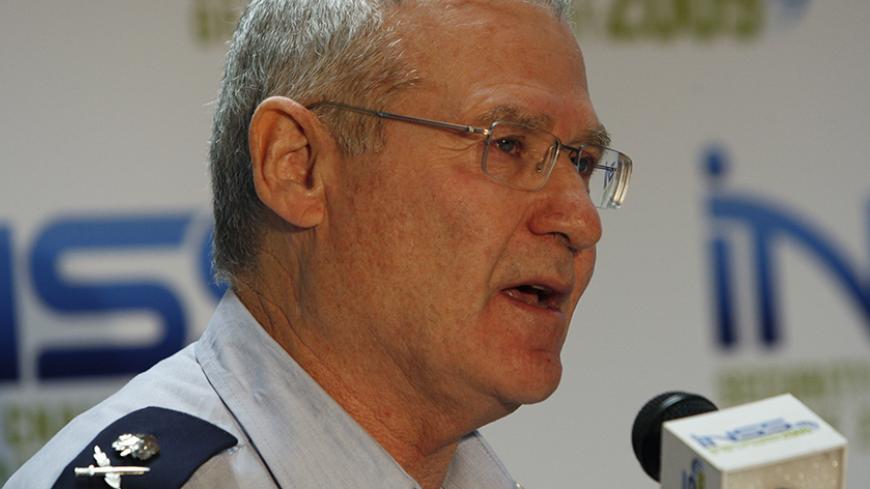 On the eve of the dramatic announcement about the framework agreement reached between six world powers and Iran, some elected and unelected officials in Jerusalem suggested that the name of the peaceful Swiss town of Lausanne should be changed to a far more loaded name: Munich, a reference to the historic agreement on the eve of World War II.

Israel’s leadership prepared a sharp counteroffensive for the unveiling, if and when, of the “shameful agreement of surrender,” Chamberlain-style, between Iran and the world powers. In interviews he granted over the past two weeks, Deputy Minister of Foreign Affairs Tzachi Hanegbi described the emerging agreement and the negotiations that preceded it between Iran and the world powers as “moral bankruptcy.”

Hanegbi, one of the most sober and experienced politicians in Israel, has also been Prime Minister Benjamin Netanyahu’s close associate for the past two years. Together with him, other experts and associates all participated in a frenzied round of interviews and repeated declarations on an almost daily basis. Chief among them was Minister of Intelligence Yuval Steinitz, in addition to defense officials, former Mossad operatives and, of course, Netanyahu himself.

On the evening of April 2, when Iranian Foreign Minister Mohammad Javad Zarif and the European Union foreign policy chief Federica Mogherini faced the press, Jerusalem was shocked into silence.

First, the very fact that a framework agreement had been reached ran counter to all Israeli assessments, according to which the deadline would be postponed once again to the end of June (the original deadline). Second, the principles of the agreement surprised Israeli officials and especially the political echelon. No, there isn’t a single person around Netanyahu or Defense Minister Moshe (Bogie) Ya'alon who will concede that the agreement is a good one, but several of its elements make it anything but the “bad agreement” that Israel has insisted all along would be produced.

What’s to be done? First off, issue a harshly worded general statement about the inherent dangers in the agreement, anonymously expressing sharp criticism. The next step: consultations. Before noon on April 3 — on the eve of the Passover holiday, just hours before all the Jews in Israel were to join their families in celebrating the festival of freedom and exodus from Egypt — Netanyahu convened the foreign affairs defense cabinet. The group has not met for many weeks, given that it is an outgoing forum and Israel has been in the throes of an election campaign in recent months. Even now, the status of this cabinet is unclear, on the eve of the formation of a new government and cabinet.

At the end of the meeting, the cabinet published an announcement expressing unequivocal and unanimous objection to the agreement. ''The deal which is proposed presents a real threat to the region and to the world, and will endanger the existence of Israel,'' Netanyahu said.

Diplomatic and political officials in Jerusalem admit that the framework agreement between Iran and the world powers has caused widespread consternation, in light of the fact that several of its achievements were unexpected. “Netanyahu,” says an Israeli defense expert who asked not to be named, “cannot afford to concede the achievements of the agreement, and given his shaky relationship with President [Barack] Obama and the bad blood between them, it will be hard for him to praise the president for the hard work. Nonetheless, they will have to quickly formulate an efficient and logical response to what was achieved. Israel will have to decide whether it storms the agreement in anger and tries to undermine it, or goes with the flow and tries to influence the final leg and to offer important clarifications, perhaps to even score some points for itself with the US administration.”

On the morning of April 3, the day following the news of the agreement, Al-Monitor spoke with Maj. Gen. (Res.) Amos Yadlin, formerly the head of military intelligence. Yadlin was the Zionist Camp’s candidate for defense minister, but after the party’s loss he has gone back to his job as head of the Institute of National Security Studies. Yadlin has dealt during his career with three nuclear programs of states considered Israel’s bitter enemies. He was one of the pilots to bomb the Osirak nuclear reactor in Iraq in 1981; head of military intelligence at the time that Israel destroyed, according to foreign media reports, the secret Syrian nuclear reactor at Deir ez-Zor in 2007; and head of military intelligence in 2006-10, the peak years of the secret war between Israel and Iran over the Iranian nuclear program.

In those years, Israel was apparently several times on the verge of attacking Iran’s nuclear infrastructure.

Al-Monitor asked Yadlin whether the agreement was good or bad. “It depends on how you look at it,” he said. “If we aspire to an ideal world and dream of having all of Israel’s justified demands fulfilled, then of course the agreement does not deliver. It grants Iran legitimacy as a nuclear threshold state and potential to eventually achieve nuclearization. It leaves Iran more or less one year away from a nuclear weapon, and Israel will clearly not like all of this.

"But there’s another way to look at it that examines the current situation and the alternatives. In this other view, considering that Iran now has 19,000 centrifuges, the agreement provides quite a good package. One has to think what might have happened if, as aspired to by Netanyahu and Steinitz, negotiations had collapsed. Had that happened, Iran could have decided on a breakout, ignored the international community, refused to respond to questions about its arsenal, continued to quickly enrich and put together a bomb before anyone could have had time to react. And therefore, with this in mind, it’s not a bad agreement.”

Al-Monitor:  Jerusalem has been ranting and raving about the agreement in the past hours. Do you agree with this tone?

Yadlin:  No. Let’s not forget that Israel dubbed the interim deal reached in Geneva a “tragic agreement,” and eventually it turned out to be a good interim deal. When there was talk of its abrogation, Israel was opposed. And another thing must be said: Contrary to Israeli assessments, the Iranians have adhered to all the conditions of the interim agreement, in letter and spirit, down to the last detail. That’s something one should also keep in mind. If they implement the principles of the agreement presented yesterday in the same way, then for the next 15 years they will be frozen at a point of being one year away from a nuclear bomb, and I think this is not a negligible achievement.

Al-Monitor:  There are already several disagreements about some of the articles. The Iranians are already claiming that President Obama distorted the issue of sanctions relief. There are some difficult issues down the line.

Yadlin:  Right. First, I'm not at all certain that these principles will get by Iran’s supreme leader, Ayatollah [Ali] Khamenei. Second, they also have to get congressional approval. Let’s not forget that we’re talking about framework principles and not a final agreement. Many other obstacles can be expected on the road to an agreement, but all in all, I don’t think we’re dealing with a tragedy here, and not with a second Holocaust. Yes, we would have been happy if not a single centrifuge were to remain in Iran, and if possible, had it also been possible to change the ayatollahs’ regime. But none of these are achievable objects. Let’s think: After all, even a US attack will not distance Iran for 15 years from a nuclear bomb, so why not freeze it in place for the same time — without a war?

Al-Monitor:  One must admit that the Americans conducted themselves in these negotiations like dilettantes. You yourself asked President Obama that question at the Saban Forum two years ago, when he said in his own words that the Iranians don’t need a heavy water reactor, nor an underground uranium enrichment facility, and now the reactor is to remain in place and the underground enrichment facility will not be dismantled.

Yadlin:  True. But my criticism of the Americans is of their negotiating tactics. I listened yesterday to the president’s comments. When he said emphatically that the US does not want to attack Iran and that additional sanctions won’t help because the Iranians know how to withstand them, he weakens his position and comes to the negotiating table without bargaining chips or leverage. I don’t know why one has to say and admit these things in advance. In my opinion, he should have done the exact opposite. After all, the only time the Iranians stopped their military nuclear program of their own accord was immediately after the US invasion of Iraq.

Al-Monitor:  What should Israel do now?

Yadlin:  If we had a prime minister who knew how to talk to the Americans and enjoyed the president’s trust, this would have been the time to jump on the band wagon and demand clarification of all the points that require clarification. There are still things that can be achieved in this agreement. At the same time, this is the time to reach understandings with the Americans, and perhaps even to reach a parallel Israeli-US agreement, providing Israel with clarifications, assurances and perhaps even defense compensation for the risks it is taking. We did things like that after the peace agreement with Egypt and at different points in time, too.

Finally, one must not forget the North Korean precedent, either, and that is the greatest risk that Israel and the world are taking now: To wake up one morning with a blatant violation by Iran, which turns it overnight into a nuclear state. One has to clarify, between us and the US, what happens if the Iranians violate the agreement and a few other important things. I would dedicate the next three months mostly to that and not to moaning and groaning.

There’s no reason for panic. Israel’s fate has not been sealed, our freedom is not in danger and all in all, we’re talking about an agreement with quite a few achievements.