Peshmerga forces near the front line in Sinjar await KRG President Massoud Barzani's orders to advance on the Islamic State. 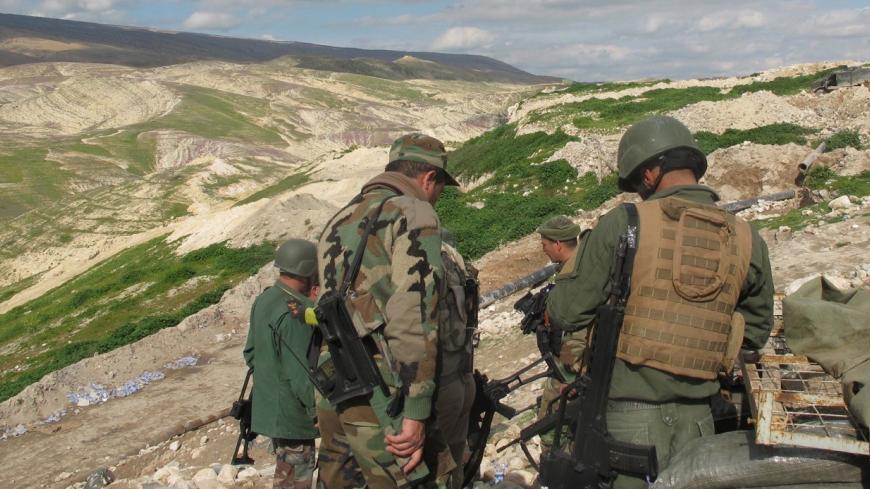 Peshmerga in the Sinjar mountains are fighting the Islamic State. - Shelly Kittleson

SINJAR, Iraq — The road to the front line runs close to the Syrian border, through Yazidi towns once occupied by the Islamic State (IS) and bombarded by airstrikes.

Peshmerga fighters allied with various other forces say they will move forward as soon as the president of the Iraqi Kurdistan Regional Government (KRG) authorizes them to do so.

Meanwhile, several members of the Yazidi ethno-religious minority expressed bewilderment to Al-Monitor about the halt of the offensive in late December 2014, after major gains were obtained with the help of US airstrikes, when over 3,000 square kilometers (1,864 square miles) in the Sinjar area were reportedly taken back from IS in less than 48 hours.

The Sinjar area in northwestern Iraq was hurled into the international spotlight last year when the peshmerga withdrew during an attack by IS, leaving the Yazidis, deemed "devil-worshippers" by IS, at the extremist group's mercy.

IS took many Yazidi women and girls captive and killed men en masse. Other Yazidis escaped to the mountains, where they subsequently suffered in the harsh summer heat and conditions, from which many had to be evacuated. Tented encampments still littered the mountains when Al-Monitor crossed through them on its way to the front line in late March 2015.

At the front line, ​Isa Zaway, commander of peshmerga Brigade 4, refused to say how much of the city of Sinjar had been retaken, but he did say that the “strategic points are under the control of the peshmerga.”

Taking Al-Monitor to a high point overlooking the city, which came under fire during the visit, Zaway noted that the peshmerga in the area worked “hand in hand” with the Kurdistan Workers Party, an officially designated "terrorist organization," and the People’s Protection Units, sharing information and weaponry.

Sustained incoming and outgoing fire continued throughout the approximate hour Al-Monitor spent there, with the allied Kurdish fighters making use of a variety of weaponry, including rocket-propelled grenades.

Zaway noted that he was in constant contact with the international coalition against IS and was able to convey requests for airstrikes.

As to why they were not trying to advance, Zaway replied, “If we get the order from [KRG President] Massoud Barzani.” He continued, “We need two to three days to ‘clean up’ the entire city,” implying that the operation would be relatively easy as soon as orders were received to go forward.

The commander noted that members of his brigade were listening in on IS radio communications 24 hours a day. “We know that their numbers are being reduced and that they are calling in reinforcements but not receiving the number of men they want,” he said.

Community leaders told Al-Monitor that the situation for the population had improved much since autumn, when innumerable makeshift Yazidi camps were scattered throughout the northern city of Dahuk.

Yazidi university professor Khidher Domle told Al-Monitor that “90% of those internally displaced persons are now in 14 camps. Some are in Dahuk and some are near Erbil.”

“We also have five mixed camps with Muslims, Yazidis and Christians,” he continued, but “most of the children still cannot attend school, as UNICEF has not been able to build schools for all the camps.’’

Many lament the fact that public services have not been restored in retaken towns, thereby hindering the residents' return.

“Unfortunately, nothing has been done” in the numerous small towns and villages in the area “liberated on Dec. 17, 2014. No services have been restored,” he said.

He noted that the area officially falls under the remit of the central government in Baghdad, not the KRG.

“None of the families have returned,” he said, “because there is no electricity, municipal services or health care centers. They have just become safe, but that’s all. They have also found 11 mass graves in the area, the latest of which they found last Monday [March 30], with 29 bodies.”

Flattened roofs dot the sides of the road toward the mountains. During a brief drive through some of these villages, Al-Monitor observed a limited human presence. The only people to be seen were those inside a few shops selling fruit and snacks, with customers in fatigues and variegated Kurdish party flags overhead.

Domle has worked extensively with Yazidi women and girls who have escaped from IS captivity. His book on the subject will be published in the coming days in the local language, with plans to publish it in English in the near future. He said, “Now, the number of women, men and children who have escaped [IS] totals more than 1,220.”

He added, “We also have the names of more than 3,500 men, women and children who are still missing after being captured” by IS last year.

Domle told Al-Monitor of a new program that would relocate many of the women and girls who suffered torture and rape at the hands of IS to Germany for health and psychological support.

“The first group arrived [in Germany] last Saturday,” he told Al-Monitor earlier this month. The second group will leave April 15. "This is the result of an official agreement between the KRG and Baden state in Germany to take more than 600 women and children.”

“They are happy with the military operation,” he added, in reference to the community, “but they don’t know why it stopped and are waiting for the other Yazidi areas north of Mosul to be liberated.”

Domle said that most of the Yazidis still held captive by IS are believed to be in Tal Afar, located east of Sinjar and west of Mosul.

Hussam Salim is from an area still under IS control. He said that he had been forced to leave his studies at Mosul University in 2007 due to threats from “IS, which existed in the area even then,” and which was running mass extortion and kidnapping rackets at the time.

Domle said, “The problem is that it is now eight months and nothing has been done to rebuild the trust between the Yazidis and their neighbors.”

“The KRG and the central Iraqi government should make a plan to start rebuilding the area as soon as it is liberated,” he suggested, calling for Yazidis to be given a leading role.

And the military offensive must go forward, he stressed.

The central government “doesn’t promise anything,” he said, “it just says we hope you will all return to your areas.”