Iraqi residents denied return to town seized from IS

Some four months after being retaken from Islamic State fighters, Jalawla, in the Kurdistan region, remains uninhabited and divided among peshmerga, Shiite militias and Asayish, with residents awaiting resolution of who will ultimately control it. 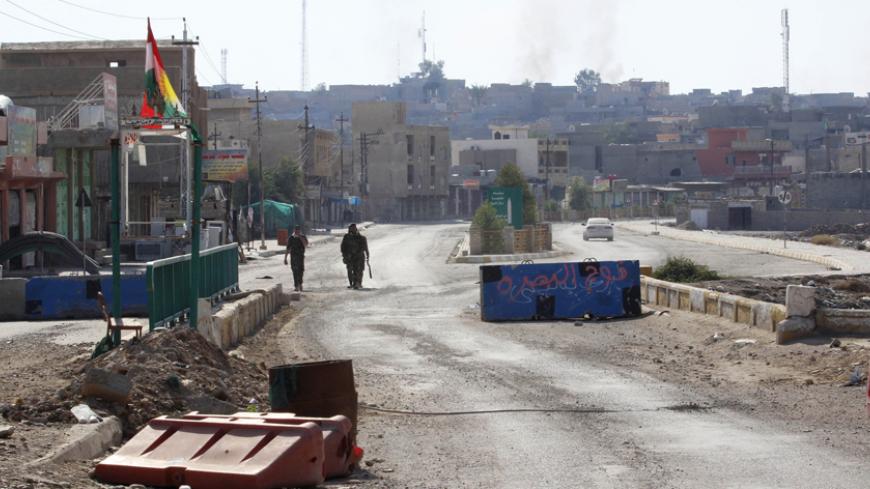 JALAWLA, Iraq — Layers of graffiti snake across walls flanking blasted windows, and charred storefront signs and mangled, cheap plastic chairs litter the streets of Jalawla. The Shiite rallying cry “Ya Zahra” covers the only remaining wall of a destroyed home, while in another area the Shiite-Sunni rivalry is evident in the words “Ya Ali” written in white and “Ya Omar” written over it in black, respectively invoking the two sects' beliefs about who should have inherited leadership of the Muslim community from the Prophet Muhammad. Zahra, also known as Fatima, had been Ali's wife and Muhammad's daughter.

Jalawla remained uninhabited some four months after peshmerga gained control of it in late November 2014. Most of its residents are said to have moved to camps for internally displaced persons in neighboring towns while awaiting the chance to return. Others have gone to live in Islamic State (IS) territory. In 2003, Jalawla had been home to an estimated 30,000 people.

Asayish, the intelligence and security force of the Kurdistan Regional Government (KRG), along with the peshmerga and Shiite militia forces control separate areas of the town. A limited number of residents are allowed to return during the day to guard property but are not authorized to remain overnight. With their mismatched camouflage, the armed men's attire is largely indistinguishable from that worn by Kurdish security forces.

In late March, pickup trucks loaded with mattresses, furniture and other items from homes and shops were spotted in the deserted streets during the several hours Al-Monitor spent in Jalawla, roughly 150 kilometers (93 miles) northeast of Baghdad in Diyala province, bordering Iran.

The destruction wrought by the monthslong battle for Jalawla is immediately apparent in the rain-filled craters outside the rubble of the old security headquarters, crumpled concrete roofs, mangled bridges and downed power lines.

Victory is trumpeted by the yellow, red and green Kurdish flags flying over various buildings and small green Patriotic Union of Kurdistan (PUK) flags strung across central streets. Somewhat ominously, a green Shiite religious banner has been raised atop the minaret of a Sunni mosque. Asayish officers bluntly refused to comment on it.

Officers from the intelligence forces, which are increasingly taking on a police function in the KRG, did, however, say that two areas, Wahda and Tajneed, which mostly sided with IS, would be leveled and rebuilt. Both were heavily damaged in the fighting and were reportedly built illegally years ago by members of the Arab communities forcibly relocated to nearby Khanaquin as part of the “Arabization”​ campaign begun in the 1970s by the Baathist regime of Saddam Hussein. The purpose of the campaign was to populate Kurdish areas with Arabs from southern and central Iraq.

These Arabs, mostly regime supporters, were then forced to move after 2003, when the original Kurdish inhabitants returned. A local told Al-Monitor that the homes in the two areas of Jalawla had been built without the permission of local authorities but were left in peace as part of a bid by Jalal Talabani, PUK leader and former Iraqi president, to prevent further strife.

Most of those residing in Wahda and Tajneed were said to have been from the Sunni Arab al-Karwi tribe. One peshmerga officer told Al-Monitor that the tribe accounted for slightly more than half the inhabitants prior to IS’ entrance, but that the land had been entirely Kurdish prior to its forced Arabization.

Some of the tribe’s members are now living in Khanaquin and the surrounding area, while many of those involved in IS activities have moved to other areas still held by the transnational jihadist group, including in Tikrit and Mosul.

In September, during a visit to the front line with a contingent, Al-Monitor was told that Jalawla, after initially being seized by IS in June 2014, had been partially retaken by the peshmerga, but then they were forced to withdraw when members of the local population began planting improvised explosive devices and “creating problems for the Kurdish forces.”

A local reporter told Al-Monitor about the early loss to IS of a US base between Jalawla and Saadiya that had been handed over to Iraqis along with large amounts of armaments. According to the journalist, the central government in Baghdad had refused to allow peshmerga forces to try to defend it.

The retaking of Jalawla was eventually made possible to a large extent by government-allied Shiite militias cutting off IS supply lines after taking Saadiya. The militias have since remained in full control of the nearby city.

The question of how the spoils of war will be handled in the various areas of the country is a major concern. Jalawla and Saadiya are located in an area of Diyala province considered “disputed territory” between the KRG and Baghdad.

“I’m not worried about Tal Afar, for example,” one man from the area said, referring to a predominantly Turkmen-inhabited city in Ninevah province, in northwestern Iraq. “But I am worried about Saadiya. The town was entirely Kurdish before IS came, and now it is entirely under the control of Shiite militias who show no sign of wanting to leave anytime soon.”

Shiite militias also hold an area dubbed Saray Khorasani, which one Asayish officer claimed was “about 25%” of Jalawla, while a peshmerga officer said, “No more than 50 Shiite militants” were still in the town and that they occupied only six homes. As the Kurdish security forces do not allow them to move freely throughout the deserted city and also control the supply lines for their basic needs, it is unclear why they are remaining there.

Al-Monitor was allowed to briefly pass through one part of the area, but photographing the fighters was forbidden. Yellow Shiite flags hung outside some of the damaged buildings. An Asayish officer born in Jalawla estimated that the Shiite population in the city had been “around 2%” before the conflict.

Although unexploded ordnance is often cited as the main reason for not allowing civilians to return to the area, the officer told Al-Monitor that another reason is that “an agreement has to be made between the central government, the Shiite militias and the KRG” in terms of who will have jurisdiction over which areas.

Speculation is rife in regard to how much central government funding is going to the militias, since all KRG defense allotments must pass through the central government in Baghdad, and the amount of weaponry the peshmerga have pales in comparison to that of the militias. What this implies in terms of the Iraqi government’s ultimate territorial intentions in an area the Kurds claim as their own is uppermost in the minds of many here.