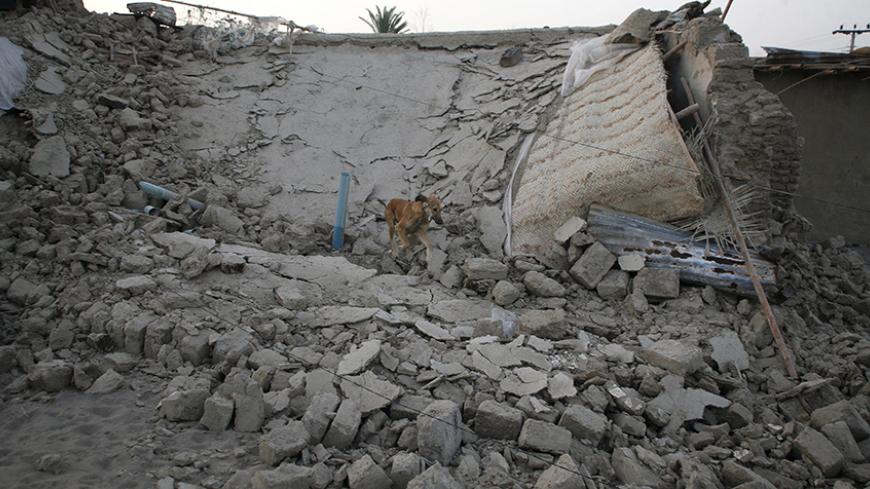 A dog is pictured on rubble of a mud house after it collapsed following the earthquake in Mashkeel, near the Iranian border, April 18, 2013. - EUTERS/Naseer Ahmed
Arash Karami
@@thekarami
April 20, 2015

Iranians held protests in major cities across the country after a gruesome video surfaced online of the killing of stray dogs in an industrial park in Shiraz. The three-minute grainy video with audio shows men in masks injecting a number of dogs with a syringe. Some claimed the dogs were injected with acid or poison. None of the men were wearing government uniforms, but Iran has long had a problem with stray dogs and many cities have outsourced the task of collecting strays to private contractors.

One of the largest protests was held April 19 outside Tehran's Environmental Protection Organization (EPO), where dozens of animal rights activists asked EPO head Masoumeh Ebtekar to pursue the case. Ebtekar addressed the protesters, saying, “Animal abuse is unacceptable under any condition and we are pursuing the case.” She added: "The general director of Fars Province for the EPO said that syringes have been found but some of the issues of the case are not clear because the municipality [of Shiraz] denies the story."

Ebtekar said EPO “has laws for wildlife but does not have laws that pertain directly to dogs and cats. Therefore, we are trying to specify a framework of laws to support animal rights so that in such a case as this, responsibilities are clear.”

Majid Kharazian Moghaddam, EPO's director of biodiversity and wildlife, said that if the case is related to dogs with infectious diseases, it would then be the Interior Ministry's responsibility. He added that laws for animal control of dogs with diseases were passed in 2008. “If a veterinarian concludes that the dog has an incurable disease, the manner of the death of the dog has to be with mercy,” Moghaddam continued.

Ebtekar also wrote an open letter to the Interior Ministry saying that the dogs in Shiraz were killed with “poison or acid in an irregular way” and said that the EPO is ready to cooperate in any manner so that the law and animal rights can be observed.

Seyyed Ahmad Nabavi, an EPO official, said that they had also written a letter to the Shiraz prosecutor’s office asking that the individuals in the video be identified and punished.

There is some confusion as to which government body is responsible for handling the case. Ebtekar said "the entire responsibility" is with the municipality and the city council and that the EPO "does not have direct legal responsibility for such an issue."

Rohollah Khoshbaght, general director of waste for Shiraz, said: “Industrial parks are in no way under the management of the municipality or the waste management and each industrial park is legally managed through its related department.”

Jaffar Omidi of the mayor’s office in Shiraz said that the industrial parks are under the supervision of the municipality and that they are looking into the case.