Iran minister apologizes for comment on 'dirty money' in politics

After coming under criticism, Iran's interior minister apologizes before an open session of parliament over "misunderstandings" about comments he made regarding dirty money in politics. 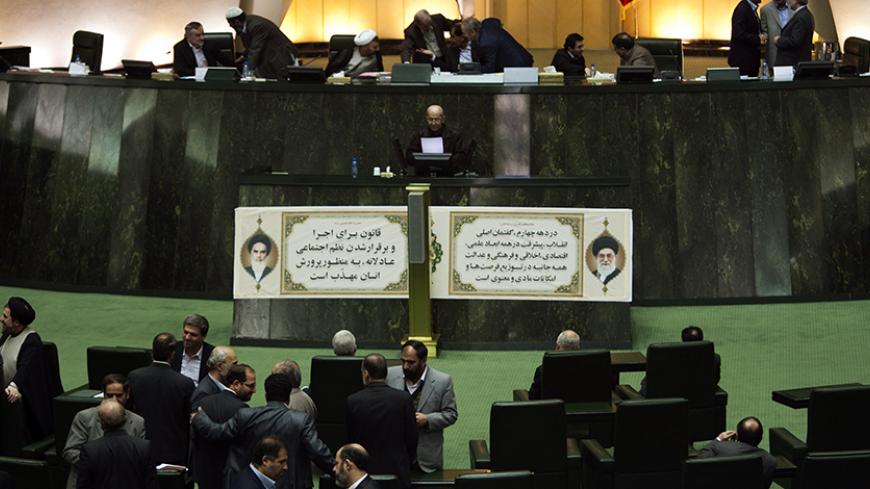 When Interior Minister Abdolreza Rahmani Fazli said Feb. 21 that “dirty money” had entered Iranian politics, he was criticized by conservative parliament members and media. His speech to drug enforcement officials that "dirty money from smuggling of illegal drugs enters the political field” prompted a letter from 30 members of parliament accusing him of “undermining the healthiest and most transparent electoral system of the world.” Many demanded that he testify before an open session of parliament to explain his accusations.

On March 2, after unrelenting criticism, Fazli backtracked, saying he had said “if” dirty money enters politics, it could cause harm to the political system. But he added that he was not going to allow “politeness” to get in the way of what needed to be said.

However, on April 26, before an open session of parliament, Fazli said, “If there was a misunderstanding in the media over a poor reflection of my comments, I apologize.” The change in tone and content seemed so sudden that some conservative media have been gloating over it and some Reformist media feel betrayed.

Reformist Shargh Daily wrote that Fazli “presented a new story” during his speech. The article stated that “instead of apologizing to the media, he apologized to members of parliament.”

During his speech before parliament, Fazli said he had told reporters not to publish his original comments to drug enforcement officers about dirty money and accused them of publishing a “contradictory, biased and distorted” version of what he said.

Fars News wrote that after celebrating Fazli’s original statements about dirty money, Reformist newspapers “spun 180 degrees” after his latest testimony. The article compared the before-and-after front-page headlines of the Reformist papers in their coverage of Fazli. Shargh’s top story, mentioned above, was headlined “Open Retreat.” Aftab Yazd’s top story went with the sarcastic headline, “Dirty Money was found in the pockets of the media.” Ebtekar chose as its top headline, “Silence in an open session.”

Fars accused Reformist media of using Fazli’s original comments to taint the conservative parliament to gain an advantage in the 2016 parliamentary elections.

Ahmad Gholami, the editor of Shargh Daily, wrote an editorial in response to Fazli’s apology. “Even if we accept [Fazli’s] comments and apology in an open session, it raises a bigger problem,” Gholami wrote. He added, “Making statements without support or documents and then taking it back and apologizing for it, it undermines the minister and the place of the interior minister, which is one of the most important and political pillars of the administration.”

Fars wrote that when the traditional conservative Fazli was first introduced as interior minister, an important position that oversees elections, many Reformists were disappointed. They then criticized him immediately for not changing the governors of the provinces, which is one of the duties of the Interior Ministry.

It seems Fazli experienced a brief honeymoon with the Reformist media over his comments about dirty money. Now it seems he is back where he started.