President Barack Obama is expected to sign the congressional review of the Iranian deal into law. 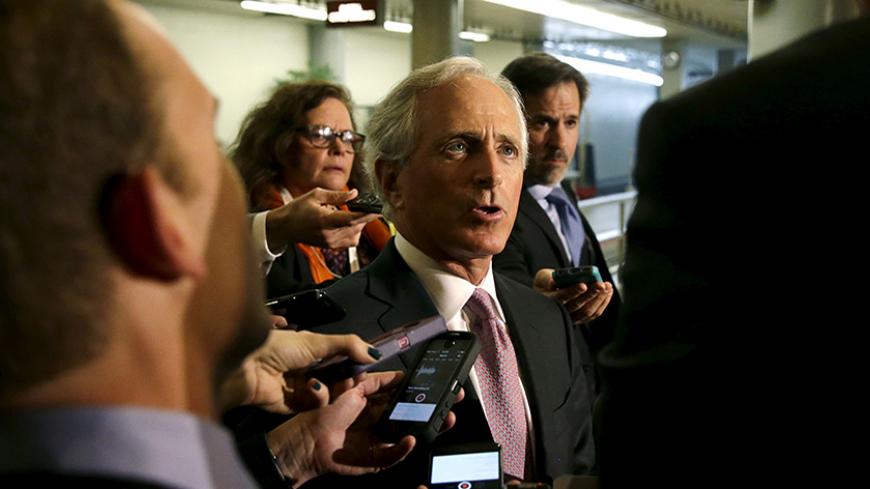 WASHINGTON — The Obama administration signaled on April 14 that it could live with compromise legislation giving Congress a say in its negotiations with Iran, paving the way for a floor vote within weeks.

The green light from the White House came after Democrats and Republicans worked out a compromise that would shorten the period for the review and weaken language linking sanctions relief to Iran's rejection of terrorism. President Barack Obama had promised to veto the bill without those changes, arguing that it could derail any chance of reaching a final agreement by this summer.

"The president would be willing to sign the proposed compromise that is working its way through the committee today,” White House spokesman Josh Earnest said at an April 14 briefing. "Despite the things about it that we don’t like, enough substantial changes have been made."

Earnest made the comments ahead of a markup by the Senate Foreign Relations Committee during which several Republicans proposed amendments to toughen the compromise deal. Several were withdrawn and only one was introduced, to revert to the original the terrorism language; it was defeated 13-6, and the committee ended up voting unanimously in favor of the original compromise.

Senate Majority Whip John Cornyn, R-Texas, has said it could come up on the Senate floor as soon as next week, and House Majority Leader Kevin McCarthy, R-Calif., has said the House would follow suit soon after. Floor debate could yet derail the bill if hawks introduce so-called poison pill amendments that scare off Democrats and provoke a presidential veto.

The legislation from Senate Foreign Relations Chairman Bob Corker, R-Tenn., allows — but does not require — Congress to vote to suspend statutory sanctions on Iran as part of a final deal. Ultimate removal of those sanctions, however, would require an eventual vote by Congress.

US and other international negotiators say they plan to gradually lift sanctions if Iran abides by its commitments in a final deal, even as the Iranian supreme leader, Ayatollah Ali Khamenei, maintains that all sanctions would have to be removed immediately. If Congress does pass a resolution of disapproval, it could derail the negotiations and would likely be vetoed by the president.

"What we have before us today," Corker said, "is a bill that forces the administration, before they are able to lift the sanctions that we collectively put in place that brought them to the table ... to bring to us every detail if there happens to be a final agreement. Every detail."

The legislation, said co-author Robert Menendez, D-N.J., sends Tehran a strong sign that sanctions relief is "not a given and certainly not a prize for signing along the dotted line" of a final agreement. Rather, he said, it makes clear that Iran must first show it is living up to its commitments.

The compromise reached between Corker and the top Democrat on the committee, Sen. Ben Cardin, D-Md., would shorten the review period after a final deal is reached from 60 days to 30 during which Obama would be prohibited from lifting statutory sanctions. That period could be extended to a total of 52 days however if Congress passes a resolution of disapproval and the president vetoes it (the total review time would be extended to 82 days if a deal is reached after July 9).

The bill also requires the president to certify to Congress every 90 days that Iran is complying with the terms of a final agreement, with failure to do so triggering an expedited vote on reinstating sanctions. The initial bill would also have required the president to regularly certify that Iran has not supported or carried out a terrorist attack against the US or its citizens during that period, but the new version replaces that provision with a demand for regular reports on that issue, as well as its ballistic missile program.

Cardin said those reports will "strengthen" lawmakers' ability to punish Iran's violations of human rights and continued work in its ballistic missile program, without endangering any potential agreement.