The play "Al-Qafas," which addresses the humanitarian crisis after the war in 2014 and exposes the parties that took advantage of the people’s suffering for their own interests, is playing in Gaza and has gained popularity. 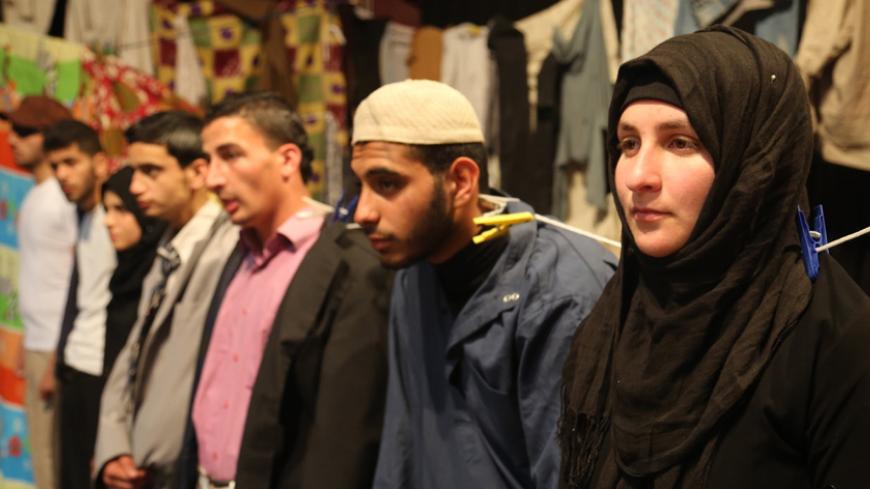 GAZA CITY, Gaza Strip — “Talking is no good. The world is watching us.” These are the last words that heroine Haneen screams in the play “Al-Qafas” ("The Cage").

Haneen’s words summarize the message of the play, which reflects the humanitarian crisis in the Gaza Strip during and after the 51-day war last summer.

The play tackles the isolation experienced by Gazans and mocks the pro-forma solidarity that was shown by foreign parties, leaders and journalists with the war's victims. They merely sought a photo opportunity.

“Al-Qafas” puts on a theatrical and bold performance that highlights the suffering of the people and how various parties are taking advantage of the situation.

The play, which has so far been performed four times at Al-Mishal Theater in Gaza, most recently April 7, is the first free artistic expression of issues that were difficult to address during the war. It will continue to run through this week, as there has been a lot of interest.

“Al-Qafas” is a comedy about the war and is set within the walls of a school run by the United Nations Relief and Works Agency for Palestine Refugees in the Near East (UNRWA) that was transformed into a public shelter.

The play's simple format and its intense realism is attracting a wide audience that is drawn to seeing its tragic reality from an artistic point of view. The play is performed away from any type of complexity or symbolism and it reflects the reality as is.

The performance starts with a scene featuring actors dancing and fleeing as the lights move across the stage. The sound of Israeli bombs exploding is clearly heard in the hall, and the actors abruptly stop several times as the lights stop moving.

Haneen returns in a wheelchair following the first scene. Her father pushes her along, and the two appear in most of the scenes while the other characters change.

The first character is an opportunist journalist who takes advantage of the feelings of victims to get a scoop, which widely happened during the war to the point that people started looking down on journalists.

The second character is an official religious figure who uses a lot of religious rhetoric and comes to check on Haneen. Haneen, however, turns away her face, and her father’s words indicate that the official was their neighbor and wanted by the occupation. When the official received a warning from the Israeli army that it was going to bomb his house, he fled with his family without warning his neighbors, resulting in Haneen’s leg injury and her mother's death.

“I barely managed to call my children to flee. The occupation forces gave us three minutes to evacuate the house. What happened to you is not my fault,” the hypocritical religious character says.

At this point, Haneen’s uncle asks him, “In what classroom are you staying?”

The wanted official sarcastically answers, “I finished teaching a long time ago. I rented a small apartment.”

This scene reflects the wide gap between the political leadership and the hundreds of thousands who took refuge inside Gaza's schools during the war.

Haneen then visits other characters. The first is a political leader and his bodyguard. The former delivers a sermon abuzz with slogans and gives Haneen a shield and takes a picture with her. The next character, a foreign representative of a charity, does the same and brags about the “blankets, sardine cans and tins of meat” that he offered to the people of Gaza. He gives Haneen a shield, takes a picture with her and leaves. In every scene, the displaced are left to face their fate alone under constant bombardment.

“Al-Qafas” also features characters from within the school, such as Abu Saber who went out of his mind after the death of all members of his family; he talks to all of them as if they are still around. The play also includes a character that represents an ordinary citizen, whose house was not destroyed and is not at risk. But he remains at the school shelter with his children and his wife after he is pressured to stay and eat “sardine cans and tins of meat.”

The importance of this scene lies in the fact that it shows how a large section of the middle class unwillingly became dependent on aid distributed at UNRWA-run schools, with some people taking advantage of the assistance offered. The daring scene features a proud citizen who turns into a humiliated beggar.

This unprecedented openness in expressing the reality through a small group of actors playing the various roles and appearing more than once in different costumes is what makes the play so successful. Hundreds of people are waiting on the nights of the performance at the doors of the theater, while dozens watch the play standing as laughter fills the hall and silence prevails in moments of sadness.

Children tremble and cling to their parents when they hear the sound of the bombings during the show.

Zain Hussein Abu Ghali, 3, holds onto his father and says: “Let’s go! There’s shelling.” But his father calms him down and tries to convince him that the sound of the bombs exploding is part of the performance and not real.

The fatalistic end expresses a defeatist reality; the end cannot be imaginary or dreamy, as some had wished. The school is bombed and Abu Saber dies.

Amjad Abu Yassin, the 22-year-old actor who plays Abu Saber, told Al-Monitor: “I'm shocked by the public’s reaction. We feel that the people yearn for the theater. This is what the Gaza Strip needs. It needs to unwind through art.”

Yasmine Abu Amr, 18, who plays Haneen, told Al-Monitor following the performance, “The power of the play lies in the fact that it unprecedentedly expresses daring positions and ideas in a bold, critical and comic context.”

The play ends as the last scene reaches its toughest moment, as if director Ali Abu Yassin hesitated to finish it. The script’s dark side of classicism and tragedy and the stationary setting, which consists of ropes on which the refugees’ clean and colorful laundry is aired, simply exemplify a cage. The 45-minute play touches the audience and makes them feel that they live in a cage without walls called Gaza.