Journalist Razan Madhoon has stirred debate about religiosity in the Gaza Strip by posting pictures of herself unveiled on Facebook. 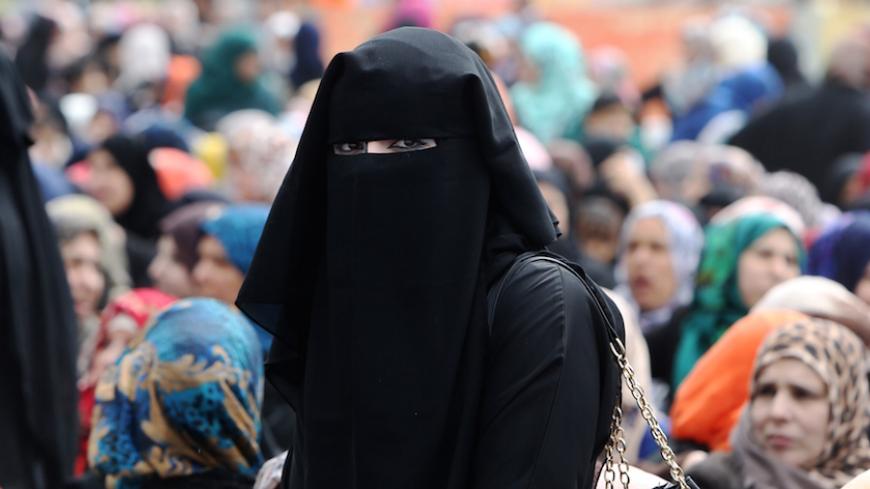 GAZA CITY, Gaza Strip — Two weeks ago, journalist and film director Razan Madhoon took off her veil and posted her picture on Facebook. The move stirred a fierce backlash of comments against her and her husband, who supported her decision.

Some people even called on to return to Islam, as though taking off her veil were on par with forsaking religion. Madhoon and her husband are known for their Muslim background in the journalism world.

Madhoon’s decision came as a shock for the Gaza public, given the region's rising religiosity. Women wearing the veil or niqab and frequenting mosques have become commonplace in the Gaza Strip. This phenomenon calls for an analysis of its underlying reasons. Is it because society is conservative that people are prone to be more religious, or because a movement affiliated with political Islam is in power? Have the wars and experiences with death drawn people closer to religion?

Sheikh Abdel Aziz Aoude told Al-Monitor, “Our society has always been religious, whether it was ruled by an Islamist party or not.” He added, “Perhaps religiosity in Gaza is only in form and does not include real social and cultural indications. For instance, praying is related to decency and order, but unfortunately the lives of religious people are chaotic, and this religious notion is not reflected in the rhythm of their [daily] lives.”

Though it may be widely believed that Gaza is a conservative society by nature, no one knows where this idea came from, as society was not as it is now in the 1960s and 1970s. Most families keep photos of their female members in their homes, unveiled and sometimes even wearing revealing clothes. The trend toward conservatism came about with the first intifada in 1987— and the birth of political Islam in Palestine, represented by Hamas.

Currently, religiosity seems to have returned to the pre-Hamas era. It is hard to say whether this indicates an inclination toward atheism, although there are many undeclared atheists in the Gaza Strip.

Islamic writer Ahmad Abu Ratima told Al-Monitor that Gaza society is facing tough social and economic conditions. The psychological repercussions of the situation mean that it is unlikely for people to behave normally. This is why a religious discourse that caters to spiritual needs and addresses social problems is so sorely needed. This widely spread discourse, so out of place its modern context, has pushed the youth to either religious extremism or complete denial of religion and the existence of god, according to Abu Ratima.

Madhoon has been under a lot of pressure, and even her daughter has felt the heat. She said, “My six-year-old daughter returned home crying when girls her age at school told her that her mum is an infidel and will burn.”

She had not expected such fierce attacks. She has read negative comments on Facebook from dozens of men and women she does not know, and received messages castigating her for her decision.

Madhoon, who stands behind her actions, noted that a large number of supporters describe her as honest and courageous, particularly during the current Islamic State threat. She said that she did not want keep wearing the veil just to satisfy the Gaza community. She said, “I recently read a lot and discovered that the issue of the veil is debatable in religion. I have been thinking about this for a whole year. I thought that it might be better to travel and remove it outside Gaza.” She added, “But then I thought that I don’t do these things. I should be myself inside and outside of Gaza.”

Abu Ratima said, “I think the veil is a symbol and identity. True, we should be open to human culture and digest innovative thoughts, but we should not abandon our identity or completely melt in another culture, either.”

He asserted that true faith comes from free will and does not fear openness, adding, “We need to turn religiosity from a social obligation to a free choice.” He explained that the political situation and the blockade limit the people’s horizons. The problem is not an intellectual one in essence, but a political one. If Gaza opens itself to the world, the environment that breeds religious radicalism or atheism would disappear.

Another civil society activist in Gaza recently took off her veil. She told Al-Monitor on condition of anonymity, “Removing the veil in Gaza cannot be described as a phenomenon. It cannot be generalized, as it is a personal choice. However, it has turned into a matter of public opinion in our society. People give themselves the right to meddle in others’ personal choices, and they judge you and measure your loyalty to your Palestinian and religious identity by whether you are veiled or not.”

She added that the blockade and the lack of real communication with the outside world have created a strict prototype for women’s appearance, though diversity had marked the Palestinian people prior to the current situation.

“I expected my decision to stir this chaos because I understand the social system that I have been living under for 25 years! I have been criticized and pressured, with many accusations aimed at guilt-tripping me and pushing me to feel ashamed about my decision,” she added.

Abu Ratima believes that it is normal to ask questions and doubt in our quest for ourselves and our identity — it is the contemporary way of understanding religious and cognitive heritage.

“In this case, religious extremism rather than spiritual depth is the threatening factor, as the former cannot solve current social and economic problems,” he said.

Sheikh Aoude believes that the pillars of Islam are its credo, action, ethics and thought. He considers a religious person to be an objective individual open to all cultures, and he believes that thinking is an Islamic duty that should not be criticized.

“People might have been put off by religion due to certain behaviors and appearances. But we should not retreat from religion based on such behavior. We should study Islam and not link it to failed experiences. Nobody can claim that they are the sole legitimate representatives of Islam,” he said.

On her Facebook page, Madhoon has kept her veiled photos up alongside her new ones without the veil.

“I'm not ashamed of a stage in my life that formed my personality. Even though some people might see this as contradictory, that was me and this is still me. My spirit has not changed,” she said.