In spite of the negative and abusive comments she receives, Reham al-Kahlout’s family supports her as she becomes a pioneer in the Gaza modeling sector. 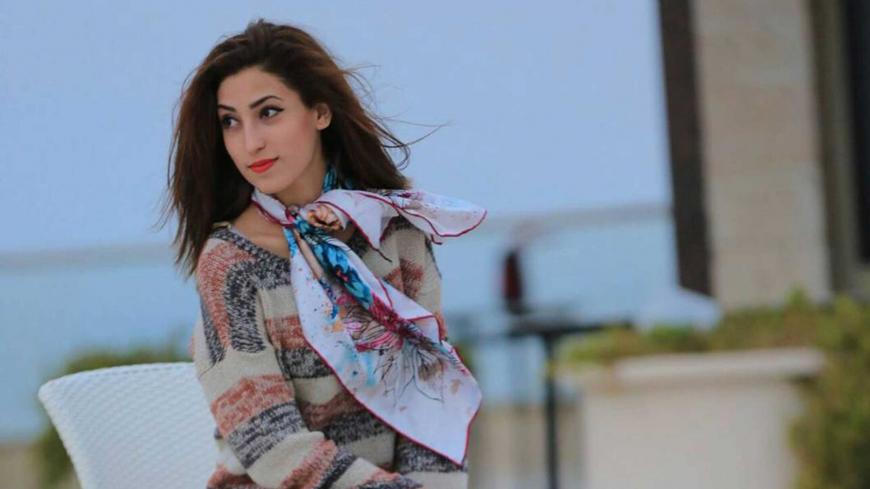 GAZA CITY, Gaza Strip — Despite Gazan society’s negative reaction toward fashion models, Reham al-Kahlout, one of the pioneers in this profession, firmly advocates a modeling career to her peers.

Kahlout, a 19-year-old model from Gaza City, started working as a fashion model about a year ago. Despite her reluctance to venture into the field because of the negative social outlook, her family encouraged her to go for it, believing it to be a unique experience.

“When I walk in the streets, I get negative and sometimes abusive comments, but I do not care about that. I have my family’s support,” she told Al-Monitor, adding that one has to have courage, the ability to shrug off negative comments and a supportive family.

Gaza held its first fashion show in April 2016 at a beachfront hotel in the presence of local media outlets. Young women modeled traditional costumes during the show to shed light on Palestinian heritage. And while these young women were criticized on social networking sites, the criticism they received was not too harsh because their costumes were conservative.

After the fashion show, various clothing shops and boutiques discovered that using real models to show collections proved to be a better marketing tool than using mannequins. So they started using models for the fashion photos they posted on social media, thus creating a new profession for women.

Kahlout explained that shop owners encouraged her to become a model. “Many of the clothing dealers were very eager to do their first photo shoot with me,” she said.

Kahlout gets paid well. “I get $100 for half an hour of clothes modeling and photo shooting, which is very good,” she said

Nesma Hamed, 23, who studies business at the Islamic University of Gaza, was forced to drop out of school because her father could no longer afford her university fees. Three months ago, she decided to work as a model, despite social pressures.

“My friends encouraged me to [become a model]. They told me that I have a beautiful face that qualifies me to be a model, so I decided to break with the social stereotype and do my first photo session for a women's clothing store in Gaza,” she told Al-Monitor.

“I faced wide criticism. My fiance broke up with me because he thought my work disrespected our religion and morals, but this did not stop me either,” she said.

With the start of the modeling phenomenon on social networks in the Gaza Strip, Mohammad Abu Alkomboz, the co-founder of Bassma Digital News agency and a specialist in building digital strategies and policies in Gaza, made an offer in November 2017 to young women on his Facebook page: “We are looking for girls to model women's clothing, including jilbab [loose cloth that covers the body]. The models’ faces will be photographed.”

He immediately came under fire. Abdel Salam Obaid commented on the post, writing, “Hard luck, my friend, our customs and traditions do not tolerate this.” Rana Shemali wrote, “Choose your sister or wife! They might be better at modeling!”

Others, however, welcomed the announcement. Khouloud Shaaban replied to the negative comments by saying, “Why the negativity?” Rama Tamer wrote, “It's a very nice idea.”

Abu Alkomboz told Al-Monitor that he had expected negative comments on his Facebook post because Palestinian culture does not approve of allowing women to work as models, but he wanted to encourage young women to join the profession and break with community restrictions. He said clothing stores in Gaza prefer to promote goods through models instead of mannequins, as seeing clothing items on human bodies is more attractive to buyers.

The social criticism prompted 19-year-old Samaher, who only gave her first name during her interview with Al-Monitor, to pass on her dream of becoming a model. “I did one photo shoot for a clothing shop, but when my photos were published on Facebook, my family was mad at me. They also contacted the owner of the shop, asked him to remove my photos immediately and gave him the money back,” she said.

Many shop owners who recently used live models to market their clothes refused to talk to Al-Monitor. One shop owner, who asked Al-Monitor not to use his name, said many of the aspiring models would impose conditions such as wearing long dresses only or simply not showing their faces at all during the photo shoot.

“When such conditions are imposed, models receive no more than 100 shekels [$27.50] for each photo shoot,” the shop owner said, describing Kahlout as “courageous and unique” as she is the only model in Gaza who agreed to model without wearing a veil.