The amendment of the electoral law in Egypt means the current parliament hall does not have enough space to accommodate an increased number of MPs. 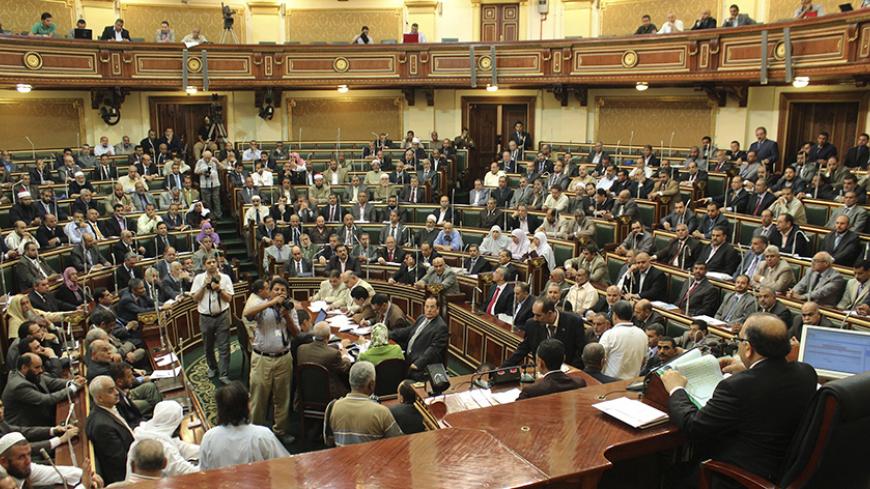 Parliament members talk during a session at the parliament building in Cairo, July 10, 2012. - REUTERS

In an attempt to overcome the crisis of the court ruling deeming the constituency division law unconstitutional — which the Supreme Constitutional Court has ordered annulled — the committee concerned with amending the laws had to increase the number of the constituencies' individual seats to 448, in addition to 120 for electoral lists, in addition to 5% of seats allocated to appointed MPs.

In 2012, the parliament building had 498 seats for legislators to sit in, while the number of MPs was 508. The new parliament has 597 MPs. In the past, some MPs would not show up for sessions; this is how the ones who actually attended could find seats to sit down.

The increase of the number of MPs in the upcoming parliament is proportional to the number of voters per each parliamentary seat that has been estimated at about 159,500 voters, with a relative deviation ranging between 119,000 and 199,000 voters, according to the Supreme Constitutional Court (SCC) and the state administrative division.

This decision is the last resort to adjust the differences among the electoral constituencies.

The current Egyptian parliament hall is not designed to accommodate such an increase in the numbers of legislators. But Ibrahim el-Heneidy, minister of Transitional Justice and National Reconciliation and head of the committee amending laws, believes that the parliament hall, after the upper press balcony is annexed, would be able to accommodate 600 MPs.

Still, experts believe that legislative practices would not be able to bear the increase in the number of MPs, which would make sessions difficult to manage.

A source in the parliament’s General Secretariat told Al-Monitor that the rise in the number of MPs is expected for one parliamentary session only. Meanwhile, the secretariat is working on a comprehensive proposal to establish new parliament headquarters in the new administrative capital on Cairo-Suez Street east of Cairo, which could accommodate 1,200 MPs in preparation for population growth as well as providing space for guests and the media, in addition to several annexed buildings for the MPs’ various offices and a giant library as well, according to the same source.

The source also said that the engineering committee formed to develop the new building is working on fashioning seats to accommodate more MPs, by setting up separations in the parliament’s aisles. Currently, MPs sit on benches rather than in separate seats. Under the new decision, each seat would be 62 centimeters (24 inches) wide instead of 82 centimeters (32 inches).

The source, who spoke on condition of anonymity, said: “There will be 26 new movable seats in the unoccupied areas. Moreover, the committee will benefit from the 77 seats in the upper press balcony. It will also possible to use the VIP balcony, if need be.”

The source added that the parliament secretariat will raise the request to move the new parliamentary session opening to the Cairo International Convention Center for approval, as it could accommodate more visitors and senior government figures.

“The parliament administrative affairs sector simulated the parliament hall after taking advantage of the empty spaces, but leaving the emergency exists intact. The simulation also showed 26 movable seats, eight of which were placed to the right of the speaker podium and 10 to the left behind the clerk's desk. Moreover, eight seats would be placed in the closed aisles so as not to hinder the MPs’ movement, in addition to 77 seats in the primary balcony to make sure that MPs could easily perform their tasks,” the source added.

For his part, Mahmoud Nafady, spokesman for the Nidaa Misr (Call of Egypt) coalition and head of the parliamentary editors department in the Syndicate of Journalists, told Al-Monitor that the increased number of MPs is only normal with the increasing population and that according to today’s constitution, the number of MPs ought to be proportional to that of voters.

“The parties within the Call of Egypt coalition did not see any problem with the additional number of MPs. There are many solutions to make room in parliament for the new MPs. The Shura Council chamber could be annexed to the parliament hall since the council no longer exists as per the new constitution,” he said, stressing that MPs in the two sections could communicate through video conference.

On the subject of annexing the press balcony to create more space, Nafadi said, “I don’t think journalists would mind, in such an exceptional case, covering parliamentary sessions from the press office through big screens,” adding:

“There have been reports saying that most of the upcoming parliamentary sessions would be held in the Convention Center to make room for everyone, while the current building would be used for the various parliamentary committees’ meetings. The Muslim Brotherhood was the first to move the constitutional meetings from the parliament headquarters to the International Conference Hall.”

However, former MP Nagi Shihabi, head of the Democratic Generation Party and member of the presidential council for the Egyptian Front coalition, said: “Even after annexing the press balcony, the parliament hall will not fit the new MPs.”

Shihabi ridiculed the 62-centimeter space for MP bench seats, saying that “slightly overweight candidates will not be able to run for elections in this case.”

He also directed scathing criticism toward the committee amending the laws, stressing that the increased number of MPs would affect their legislative role. A bigger number of MPs means more time will be needed for everyone to comment on proposed laws, which might lead to the passing of fewer laws than what the country needs.

Shihabi said that that the committee made a mistake in thinking that increasing the number of MPs will end the constitutional crisis. He said the upcoming parliament is still threatened with dissolution; there are still seats in certain electoral constituencies that do not approximate the average number of voters, and there is disagreement as to the standard deviation of this percentage between one constituency and another.

The fact that the Egyptian parliament entrusted the same committee that made defective laws with the drafting of new parliamentary legislation reveals the magnitude of the legislative crisis in Egypt. Forming a fragmented parliament, where MPs are competing for seats instead of fulfilling their legislative role, might eventually lead to its dissolution.