As Egypt has failed to undergo voluntary trial inspections of its maritime works, ports and ships, the International Maritime Organization's upcoming official inspections could negatively affect shipping in the Suez Canal. 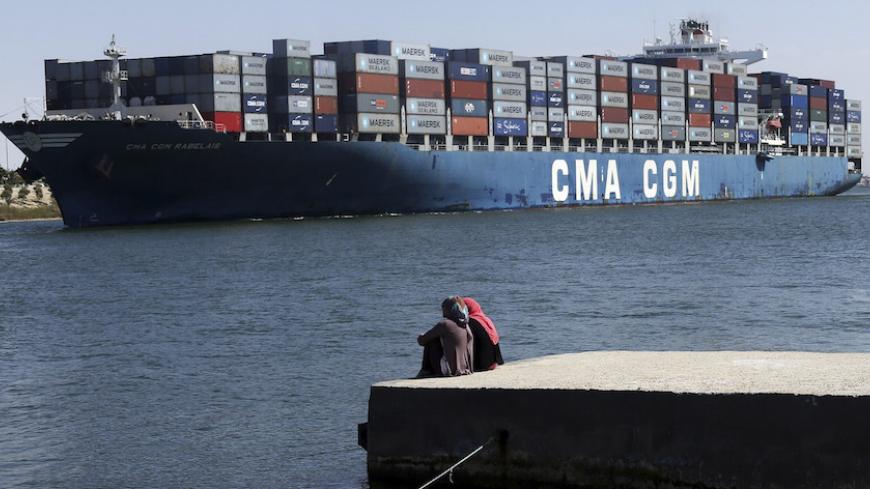 Women sit and watch as a container ship navigates the Suez canal near Ismailia, northeast of Cairo, May 2, 2014. - REUTERS/Amr Abdallah Dalsh

On March 15, news sites reported that a letter had been sent to the Egyptian Ministry of Transport by the International Maritime Organization (IMO), informing the ministry that in 2016, there will be an inspection of the ships, ports, maritime routes and works, as well as the government agencies overseeing shipping in Egypt. According to reports, the purpose is to gauge compliance with shipping safety standards set by international agreements, which the IMO is charged with enforcing.

The opportunity for voluntary inspections for all countries first began in 2007. Egypt planned to participate, and set four dates to do so. However, the Egyptian Maritime Safety Authority excused itself from the inspections and requested postponement each time, most recently on Sept. 23, 2014. Egyptian newspapers reported that the most recent postponement was the reason the IMO sent a letter to the Ministry of Transport, informing it that the mandatory inspection would come in 2016 without Egypt having the opportunity to benefit from the voluntary inspection.

The Maritime Safety Authority is a government body under the Ministry of Transport that oversees safety concerns for shipping routes and ports.

Ahmed Amin, the adviser to the Minister of Transport for maritime transport, told Al-Monitor that following negotiations, a new date had been set for Egypt — September 2015 — to take part in a voluntary inspection. According to him, this is the last chance for Egypt before the mandatory inspection is conducted.

News outlets such as El-Fagr and Misr Day reported that Egypt's failure to undergo the inspection could bring about sanctions on all shipping activities in Egypt. On March 21, they quoted maritime expert Mohamed al-Hadad as he expressed his fears that the inspection could threaten shipping in the Suez Canal and have a negative impact on the state’s income and the new Suez Canal project, which is considered one of the most important means of reviving the Egyptian economy.

However, Hadad’s official Facebook page stated that he had been paralyzed for about a month prior to the date of the statements attributed to him, and denied making them.

Yet Capt. Saeed Ayoub, a naval expert, told Al-Monitor that the IMO does not have the right to impose sanctions on a state or ban shipping in certain navigational routes or ports. Rather, what the IMO can issue toward any fleet, ports or shipping routes in any state are merely recommendations. Each state has the opportunity to benefit from these recommendations and rectify the errors in its shipping systems, and then the IMO will conduct another inspection. If the same mistakes are found, the IMO will give the state a bad ranking. States are classified among a white list, a grey list and a black list. He said that the IMO may issue warnings against dealing with some ports and routes in some states, or against dealing with certain ships, but it cannot issue sanctions.

He also noted that the Suez Canal is one of the best navigational routes in the world, and expected that the IMO would not issue any warnings following its inspection. In the same context, Ayoub said that even if warnings are issued, no one will stop using the Suez Canal because it is a unique and indispensable route. Any other route would be more costly and require more transit time, and might pass through ports or routes that are more dangerous or have issues, he said.

Wael Kaddoura, a former member of the Suez Canal Authority’s board, told Al-Monitor that it is impossible for sanctions to be issued banning shipping through the Suez Canal, because it is an international shipping route whose use is regulated by international agreements (the Convention of Constantinople) that forbid banning shipping in the canal for any reason. According to Kaddoura, the only thing the IMO could do regarding the canal and its ports is issue recommendations or warnings.

Meanwhile, Amin said that a plan is currently underway to develop Egyptian shipping before the inspections. He noted that the majority of shortcomings facing the Egyptian shipping sector relate to ships rather than ports or routes.

It is worth mentioning that in 2013, news sites published reports about a study conducted by Abdo Ali Abdul Karim, a naval expert and former adviser to the Maritime Safety Authority. This study warned that Egyptian ports (including Suez ports) could be isolated from the world after the inspection, due to maritime safety violations. It said that warnings against dealing with Egyptian ports may be issued because of these issues, and noted that Egyptian shipping is ranked low on the grey list of states in the shipping classification of the Paris Memorandum of Understanding issued by the IMO. The study also pointed out that most states of the world had banned 45% of Egyptian ships from entering their ports for more than 20 years as of 2011, due to their low classification and inclusion on the IMO black list.

Natasha Brown, the IMO’s media spokeswoman, told Al-Monitor that the inspection will cover all shipping agencies that work with the state in overseeing the sector, and that the IMO imposes no sanctions on violators. Rather, the organization issues a set of recommendations and advice for development and correcting problems, as well as classifications for all states according to the extent to which they commit to the IMO’s standards.

What this means is that the IMO does not issue sanctions or ban shipping in a certain state. In the event that Egypt receives a low ranking following the inspection, there is a possibility that some states will instruct their ships not to operate in Egyptian shipping routes and ports, as previously happened with 45% of Egyptian ships, and this could threaten shipping in the Suez Canal and the new Suez Canal project. However, this possibility is unlikely, given the importance of the Suez Canal as a shipping route, especially since Cape of Good Hope (the only alternative route) goes through the territorial water of low ranking countries, such as those in southern Africa and the Horn of Africa, which are notorious for piracy.