Egypt’s young generation is hanging by a thread, but Liberland has given the youth some hope amid mounting instability and high unemployment rates in the country. 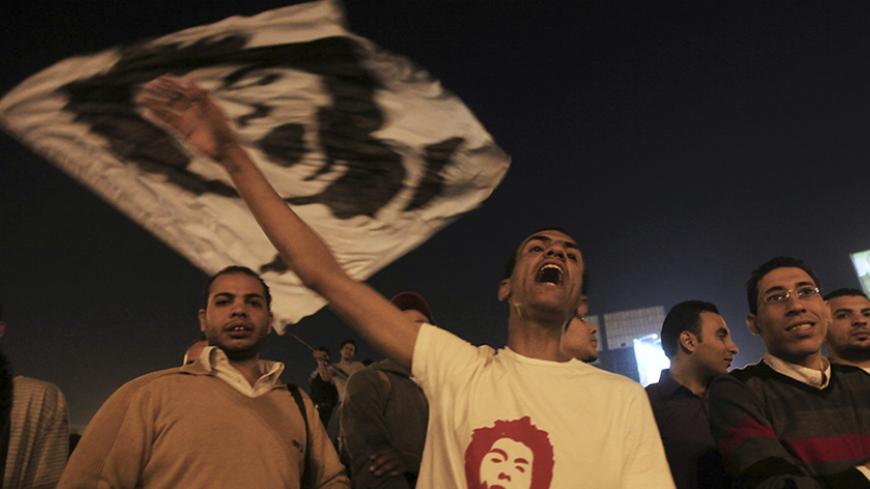 Demonstrators wave a flag with a picture of youth activist Gaber Salah on a defaced monument, in the center of Tahrir Square during a protest in Cairo, Nov. 18, 2013. - REUTERS/Amr Abdallah Dalsh

A young Czech named Vik Jedlicka invited global citizens on April 13 to become citizens of a new state called Liberland, which he founded on an area of 7 square kilometers (2.7 square miles) situated between Croatia and Serbia on the banks of the Danube River. This initiative has caused a stir in Egypt. Liberland exists only on the Internet, and no state or international organization has so far recognized it. But what is strange is that many Egyptian youths have filled out the online immigration form available on the website set up by Liberland’s founder. Out of 50,000 immigration applications submitted, 20,000, or 40%, were submitted by Egyptians, according to Al-Masry Al-Youm newspaper. Social media has paid much attention to Liberland and how to immigrate to it.

Mohammed Hashim Bahri, the head of the psychology department at Al-Azhar University, told Al-Monitor: “From Liberland’s official website, we found that the slogan of the alleged state is ‘live life and let others live it with you.’ This slogan has attracted Egyptian youth, who dream of immigrating amid a fiery political conflict and political divisions. Rejecting the other has become indicative of the current situation. Every party believes that it is right and wants to eliminate the other side. Young people have become frustrated and now dream of a place where they can freely exchange views.”

Bahri said that Jedlicka has placed conditions on obtaining citizenship. They include respecting other people’s freedom irrespective of race or religion; respecting other people’s property and not infringing on it; holding no extremist views; and having no criminal record. These conditions make Liberland the utopia that young people have been looking for; Liberland's citizens will be not be subjected to extremist ideologies and will live in a tranquil and safe environment on the Danube.

According to the Central Agency for Public Mobilization and Statistics, 61% of Egyptian youth want to emigrate in any way possible, even if it's illegal, because of unemployment. The quest for a livelihood is a major concern for most young people, with the unemployment rate approaching 25%, according to the World Bank. The Egyptian government estimated unemployment at nearly 13% in January 2015.

Bahri said that a distinction should be made between temporary and permanent immigration. Temporary immigration is useful for the homeland because of foreign remittances and because the homeland acquires the immigrants’ experiences when they return. Permanent immigration, on the other hand, cuts off the immigrant’s relationship to their homeland, which they would only visit as tourists while investing their money in the country they immigrated to. Thus, the homeland does not benefit from the foreign experience.

Bahri added that the Egyptian brain drain and the loss of citizens who hold advanced degrees in rare specialties are harmful to the overall well-being of Egypt. Many Egyptian professionals work abroad in the fields of nuclear engineering, nuclear physics and space science, after having completed their studies in Egypt. There are several reasons why these scientists leave Egypt, some of which are linked to the scientific climate in the diaspora where the latest technologies are available. Egypt's scientific research budget is only 1% of the state budget. Moreover, low wages, unfair promotions and government bureaucracy have prevented progress.

Ahmed Refaat, former dean of the faculty of law at Cairo University, told Al-Monitor that talking about a new state on a piece of vacant land is “some kind of fantasy.” He said that new states are established when two or more states unite — as was the case of the Soviet Union — or when part of an existing state secedes and declares independence. He said that the establishment of any state is associated with three elements: people, territory and the state. The people and the state in Liberland’s example are nonexistent. Moreover, Jedlicka, according to Refaat, falsely claims that Liberland’s territory belongs to neither Croatia nor Serbia. In fact, all the land on earth, except Antarctica, is claimed by states.

With regard to the possibility of Liberland joining the United Nations by satisfying these three elements, Rifaat added that Liberland must be recognized to get UN membership. No country has yet recognized Liberland.

For his part, Ambassador Badr Abdel Ati, spokesman for the Egyptian Foreign Ministry, said in a TV interview in regard to the emergence of the new European country Liberland that the consular sector in the Foreign Ministry has issued a warning to citizens that these invitations may be attempts to defraud them. He said there is no country with such a name and people should get information from only one source, the consular sector, not through social media. He appealed to Egyptian citizens wishing to travel abroad to rely on accurate information so as not to fall prey to fraud.

The fact that Egyptian youths have rushed to apply to emigrate to a virtual state is a clear indicator of the extent of frustration and dissatisfaction of many youths, whose dream to live in freedom, dignity and social justice after the January 25 Revolution has been ignored.