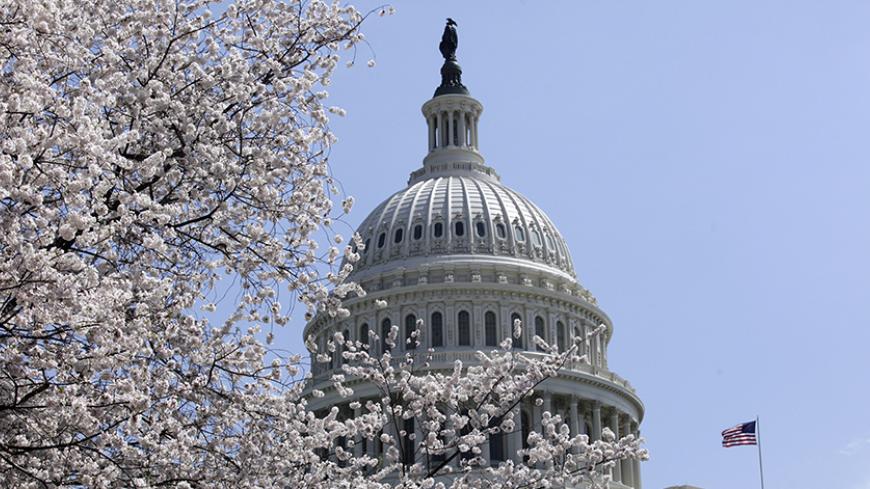 Cherry trees in full bloom in front of the US Capitol in Washington, April 10, 2013. - REUTERS/Yuri Gripas

Congress is targeting Iran with the piecemeal release of its annual defense bill over the next few days.

The must-pass legislation is expected to contain multiple provisions demanding that the Obama administration continue treating Iran as a US foe even as the two countries negotiate a nuclear agreement, aides tell Al-Monitor. Already, preliminary text released April 21 by the House Armed Services Committee calls on the Pentagon to establish a strategy for countering Iran's "growing unconventional warfare capabilities."

"It just seems to me that what's happening in Yemen right now is further evidence that you can't just look at our relationship with Iran through the prism of one program," Committee Chairman Mac Thornberry, R-Texas, told reporters at the start of a briefing April 21. "It's a range of activities that are causing difficulty, and it's pretty hard to isolate just one from another."

Thornberry's comments echo growing congressional concerns that President Barack Obama may be hoping that his nuclear negotiations, if successful, could usher in a new relationship with Tehran even as US Navy ships are seeking to interdict the delivery of weapons to Yemen's Houthi rebels. Iranian Foreign Minister Mohammad Javad Zarif made clear that was his expectation in a New York Times op-ed on April 20.

The face-off in Yemen "highlights complications" in getting to an enforceable nuclear agreement, Thornberry said.

"I think we have to be careful," he added. "Even if this [nuclear] agreement works out perfectly, and nobody thinks it will — then Iran has a host of other activities around the world that are problematic."

The request for a new defense strategy against the Iranian threat is spelled out in legislation from the committee's panel on emerging threats, which is scheduled to be amended and voted on April 22. The full committee will unveil its comprehensive bill next week, with the Senate set to follow suit in May.

"The committee notes that unconventional warfare is defined most accurately as those activities conducted to enable a resistance movement or insurgency to coerce, disrupt, or overthrow a government or occupying power by operating through or with an underground, auxiliary, or guerrilla force in a denied area," the emerging threats bill states. "The committee also notes that most state-sponsors of unconventional warfare, such as Russia and Iran, have doctrinally linked conventional warfare, economic warfare, cyberwarfare, information operations, intelligence operations, and other activities seamlessly in an effort to undermine US national security objectives and the objectives of US allies alike."

Some of the language that has been floated could require Iran to cease its support for terrorism, answer the International Atomic Energy Agency's concerns about its past nuclear activities or refrain from putting online Russian S-300 surface-to-air missile systems before sanctions could be lifted, a source from a pro-Israel organization told Al-Monitor. Committee aides, however, say the Armed Services panel is unlikely to deal directly with the nuclear negotiations because messing with the sanctions regimen in any way would send the whole bill for review to the House Foreign Affairs Committee, which has primary jurisdiction.

Another avenue lawmakers may want to pursue is putting limits on the US military's intelligence sharing and other forms of cooperation with Iran in the fight against the self-proclaimed Islamic State. While publicly opposed to working with Iran in any capacity, Iran hawks are loath to set hard rules.

"Those kinds of restrictions on commanders in the field tend to be counterproductive," said a senior committee aide.

Legislation that gives Congress 30 days to review a final deal may also provide a vehicle for similar amendments. The bill could be voted on in the Senate this week after Republicans and Democrats struck a deal April 21 on stalled anti-trafficking legislation and Obama's nominee for attorney general, which are expected to be voted on first.

The bill's author, Senate Foreign Relations Chairman Bob Corker, R-Tenn., managed to avoid "poison pill" amendments when his committee unanimously voted it out of committee last week. Hawkish floor amendments, notably ones that would link sanctions relief to terrorism, could however peel off Democrats and prevent the bill from getting a veto-proof majority.