Turkish teacher on why she embraces Sufi lifestyle

In an interview with Cemalnur Sargut, a renowned writer, researcher and teacher of Sufism, she explains how it is not a philosophy but a lifestyle. 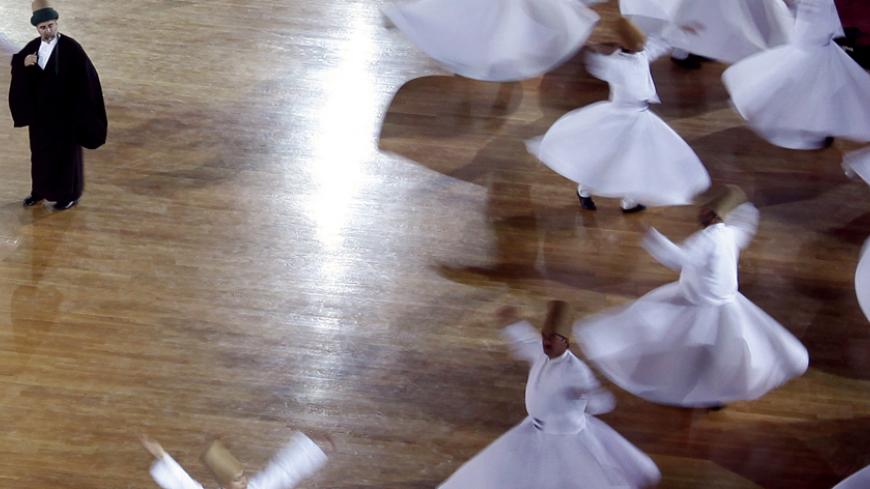 While Cemalnur Sargut is a renowned writer, researcher and teacher of Islamic tasawwuf (Sufism) in Turkey, not enough is heard about her abroad. Her radiant smile, soothing voice and instruction of peaceful doctrines of Sufism keep attracting an ever-increasing number of followers in Turkey.

It was Sargut’s early curiosity in philosophy that led her to a detailed study of the Quran, discovery of Rumi and embracement of Sufism as a particular lifestyle. So, though she taught chemistry for 20 years, she found her true calling elsewhere. She shares her tasawwuf mastery through "Masnavi" lessons, alongside numerous books and conferences where audiences listen enthusiastically. Since 2000, Sargut has been president of the Turkish Women’s Cultural Association, Istanbul (TURKKAD).

TURKKAD member and Sargut admirer Isil Sarraf told me: "Some like her narrative, some her ethics, some her knowledge, some her love of Allah and the Prophet, some her culture, some her oratory and some her casual appearance; her life influences everyone … When you understand that she likes you unconditionally and continues to teach without expecting anything in return, your admiration for her grows. You want to do what she tells so as not to lose her affection. Then you realize what you see and adore in her is your own being, your own reality. She invites you not to herself but to Allah."

The text of the Al-Monitor interview with Sargut follows:

Al-Monitor:  You say that tasawwuf is not a philosophy but a lifestyle. How so?

Sargut:  Of course, tasawwuf involves some learning. to understand and truly perceive something, you have to make use of its literature and philosophy. But knowing this literature and philosophy doesn’t make one a Sufi (mutasavvif). A Sufi is one who spreads the meanings of his proximity to Allah, his/her belief and faith, love for humans for the sake of Allah, and art of getting along well with those around him/her. Sufis can never be furious, violent or hateful, but must be full of love. They fight not against the cruel but against cruelty, and never with hatred because they know whatever is manifest is an attribute of Allah. They fight against the event not the person, because they know that if a punishment is required, Allah will see to it. On the other hand, they don’t get upset for those who are being punished because they know that punishment will train them to achieve good manners.

Those who are in close connection with their creator gain more confidence in themselves because they actually confide in Allah. They try not to go against Allah’s will not to upset Him. I don’t personally believe in gender difference in terms of violence. To whomever we are violent, in fact it is toward the name of Allah. For mankind to become really humane, one has to comprehend divine love.

Al-Monitor:  How do you evaluate the current state of Muslims in the world? What contributions can tasawwuf make?

Sargut:  In this world, the more there is understanding, love, submission, good morals and respect for humans due to the love of Allah, the more there is misconception and adherence to forms. People have abused various belief systems to convey the hell from within them to the outside world. They have not understood religion or ideologies such as communism, capitalism and feminism and have thus exerted to violence. Even when conveying the understanding and belief that is undoubtedly true, if one displays egocentric behavior, that belief loses its value and s/he is filled with hatred and rage.

Actually tasawwuf teaches us that respecting the created means respecting the creator. As our relation with the creator increases, our love and respect for the created also increases. Some claim that tasawwuf has nothing to do with religion, but in fact tasawwuf is the true Islamic way of living that has attained its perfect state. Working toward understanding the real meaning of the Quran means practicing the lifestyle and good morals of the Prophet (peace be upon him) and his beloveds. We learn forgiveness from Allah. But unless we move closer to Him, that is, moving closer to perfection, feelings of hatred dominate. The most important thing that has to be done is to spread tasawwuf’s understanding of religion to the whole world.

Al-Monitor:  In one of your books you write: “Those who feel inferior resort to violence. They become violent to cover up their faults. As can be seen, all the problems are caused by our efforts to prove us superior.” Does this apply to men’s violence against women?

Sargut:  I think people develop inferiority complex when they are unsure of themselves and lose their self-confidence. This complex causes them to oppress others and to consider themselves superior. What is dominant in them is the ego, which is the lowest level of self. Such people never go on a diet to curb the desires of their ego. They see themselves like a God and in a sense commit polytheism (shirk). Such people exert to violence because their animalistic features rule within their body.

In his “Mathnawi,” Rumi says love for women is because of witnessing Allah as reflected in the mirror of their being. According to tasawwuf, woman is the light of Allah’s beauty shed onto this earth. Again in “Mathanawi,” Rumi says a man who is wise and fine-spirited is understanding and compassionate toward a woman, and never wants to hurt or injure her. He refrains from treating her rudely. On the other hand, the ignorant and stupid men oppress women treating them harshly because in their nature animality prevails.

On many TV programs, we learn to humiliate others to bring our ego in the foreground. Unfortunately such manners are quite common today. In other words, whatever happens to the others is of no importance. What matters is ourselves. On the contrary, tasawwuf teaches us to say first you, then me, because Sufis witness Allah’s names in the created and recognize Allah’s righteousness. They believe in the need for the existence of each and every being, so that integrity is achieved. We must try to know Allah and his Prophet (peace be upon him) to become like them and learn to struggle against our ego (nafs).

Al-Monitor:  Today in the West, especially in the United States, there is a great interest in tasawwuf. But on the other hand, some "orthodox" Muslims criticize tasawwuf, claiming that it simplifies Islam to a mere doctrine of love. How would you assess this?

Sargut:  In my own experience I see that contrary to what is told, there is a big interest in tasawwuf all over Turkey. I infer this both from response to my lectures and from the love and acceptance I receive from certain groups despite my outlook to which they would normally object. This of course has got nothing to do with me, but probably with my love for Allah.

Beliefs differ depending on the individual, each having their own concept of Allah and a different realization of prophet. Tasawwuf teaches us to respect each other’s beliefs and to love our differences. Fanatics are the ones who cannot love differences. They cannot see Allah everywhere. They just accept their own belief of Allah up in the sky and impose this on others. A true believer does not impose ideas. He understands everybody else’s ideas, and respects them. Regarding this perspective, my teacher has a very meaningful saying. Kenan Rifai says, “I'm neither with this nor that and I'm also with this or that.” I believe that if we can truly teach and practice tasawwuf including teaching it at universities, then we can live in line with the best morals of our Prophet.

Al-Monitor:  How do you regard the religious and moral portrait of Turkish society?

Sargut:  I think the negative is louder. Today’s education has injured our spiritual training. For instance, since we try to learn a foreign language, even before learning Turkish properly, we have started using fewer words to convey meaning. Turkish, like Arabic and Persian, is a very rich language. This abundance enables contemplation, for one starts thinking about the deeper meanings of expressions. Such contemplation is what we have lost. Today everything is much more easily accessible, and some customs and traditions may contradict true Sufi beliefs. Some live to criticize others without truly knowing them. And sometimes people are judged by their physical appearance and not considering their actions, words or beliefs.

In spite of all this, Anatolia is the cradle of tasawwuf. Let's not forget that while Ibn Arabi was circumambulating the Kaaba, the Prophet (peace be upon him) had told him, “Go to Anatolia and uncover your knowledge. Only there can you be understood.” I believe that this land will inject its fruits with the deep faith and belief that has accumulated within, and tasawwuf, which is presently only a fashionable concept, will truly and rightfully be practiced.