Young graduates in Damascus are having a hard time securing a job in their field, thus turning to nongovernmental organizations and volunteer work. 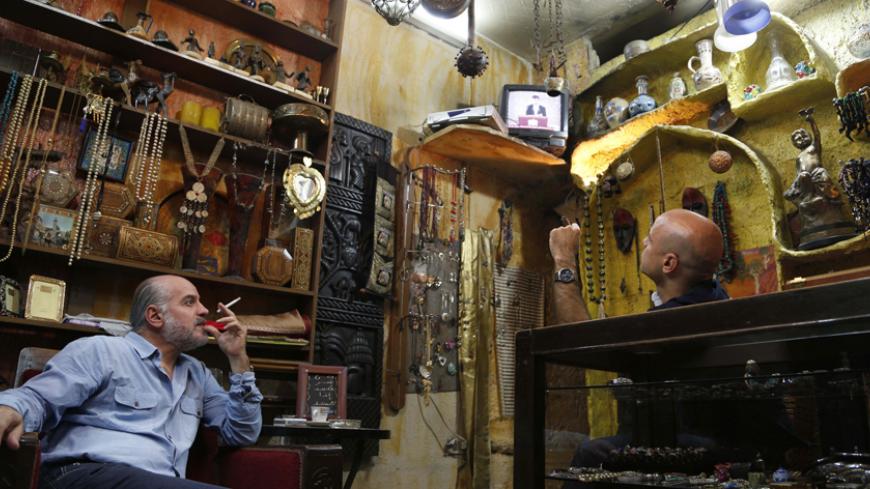 People sit in a shop as they watch a TV broadcast of a speech by Syria's President Bashar al-Assad, in Damascus, July 16, 2014. - REUTERS/Omar Sanadiki
Mustafa al-Haj
March 3, 2015

DAMASCUS, Syria — Behind the Umayyad Mosque in the old city of Damascus, where the streets are still busy during the day, Abu Mohammed sits on a wooden chair in front of his gold shop playing backgammon most of the time. The gold trade is no longer in vogue as the number of customers has drastically decreased, and so he has time on his hands.

Al-Monitor met Abu Mohammed at his shop, which has become a place where he spends time at leisure instead of working. “Two years ago customers stopped visiting the shop, except for a few people who come in to sell their possessions or to ask about the constantly rising prices of gold, due to the Syrian pound’s drop against the US dollar,” he told Al-Monitor.

“This trade is no longer profitable. Many of the jewelry shop owners have closed down their shops and started new jobs. It seems I am next. I will look for another profession if things go on like this,” he added.

Not far from Abu Mohammed’s empty gold shop is his neighbor Adnan's accessory and gifts shop, which was once also a jewelry shop.

“Before, few people wanted to buy small items and gadgets as a friendly gesture or gift, as they used to prefer gold. Now it is the other way around, especially in light of the dire economic conditions faced by Syrians, who prefer not to buy any gold. I am glad I found an alternative to my old job. Although it is less profitable, at least I can still make ends meet,” Adnan told Al-Monitor.

The gold trade is obviously one of the professions that has been affected by the Syrian civil war, which has entered its fifth year. On the other hand, other professions have gained popularity, such as journalism, which now provides a fixed income to a good number of young Syrians.

“One journalistic article is worth one month of work in the medical field [equivalent to roughly $300], of course taking into consideration the exchange-rate difference,” said Dr. Nael, who spoke to Al-Monitor on condition his last name not be revealed. Nael came from Aleppo to Damascus to work as a journalist. Journalism has been a great source of income for him after he lost his job in one of Aleppo’s hospitals in northern Syria, the name of which he preferred not to mention, as a result of the war.

“In Damascus, I could not open a clinic or find a job in private hospitals. Therefore, I started writing press articles, especially since all media outlets are eager for news from Syria. Journalism has turned into my basic source of income. However, after the war is over, I will focus again on my dream in the medical field,” he added.

While some Damascenes have changed professions willingly, others have found themselves forced by displacement and war conditions to embark on a change of career.

Abu Radwan told Al-Monitor that before moving to Damascus, he used to own a carpentry furniture workshop in Arbin in eastern Ghouta, which was burned to the ground. “I work as a taxi driver right now, and I heard that the city of Arbin has been flattened after the heavy shelling by the regime’s forces,” he said.

“The war has tipped all the scales. Some people have made great fortunes, while others have lost everything they own,” he added.

Other activities have started gaining ground as well, especially among young people, such as volunteer work and work with nongovernmental organizations (NGOs), whose numbers have been on the rise during the past two years in Damascus and with the escalation of the war.

Al-Monitor met with Maher, a new graduate of the faculty of economics at Damascus University, who spoke about his volunteer work. “I tried so hard to look for a job in my field but to no avail, as people have been displaced to Damascus, which has become densely populated. Moreover, in light of the large numbers of displaced young people from other towns, it has become even more difficult to find a job; therefore I decided to work as a volunteer with the organization Jouzour,” he said.

“It is true that I only receive a token salary in exchange for my work, but I feel happy. I work for relief campaigns and provide humanitarian services and fill my time with something useful,” he added.

Khaled, a young graduate of the department of libraries and information at Damascus University who works for an NGO in Damascus called Mobadroon, has a different take on this issue.

“If you managed to secure a job with the state, you would face accusations from the opposition. Meanwhile, it remains very difficult to find a position within the private sector for new graduates with no experience such as myself,” he told Al-Monitor.

He added, “Working with NGOs is much easier, as the work does not necessitate previous experience, and all you need is to be familiar with office affairs and languages. I can gain some experience while I am working here and then after the war ends I will search for a real job, and maybe even outside Syria."

Syrians hope that the war comes to an end very soon, so they can have their old jobs back. Abu Mohammed wishes to sell gold again as he used to four years ago, when his small shop would be filled with customers from Damascus and the countryside.