The Gaza Strip has grown accustomed to billboards thanking foreign donors for their support, but these billboards have done little to lift the siege on Gaza. 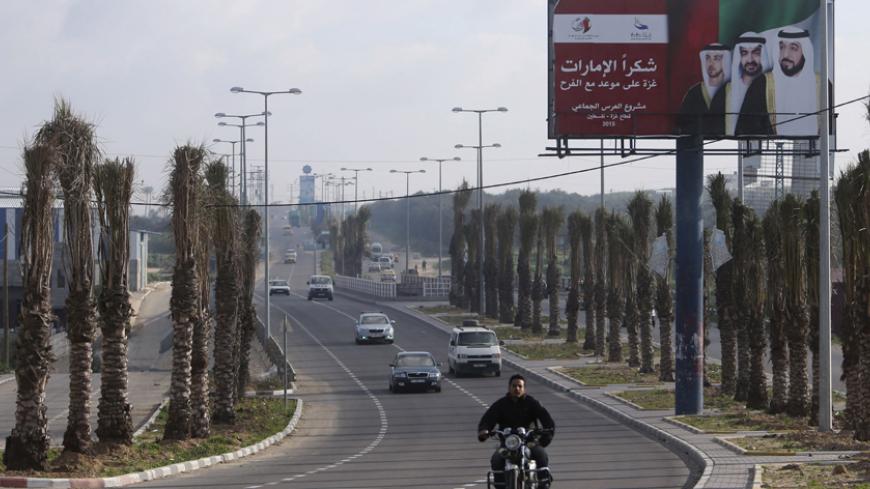 GAZA CITY, Gaza Strip — A few years after Hamas took control of the Gaza Strip in 2007, a new phenomenon emerged. Every now and then, a roadside billboard would be erected, expressing gratitude to a country or figure for providing financial of political support to Hamas, or even funding for a project in the Gaza Strip.

This month, a new series of billboards appeared in Gaza, erected by a local nongovernmental organization, ​the Palestinian Center for Human Perseverance, which is run by Jalila Dahlan, wife of the dismissed Fatah leader Mohammed Dahlan, who resides in the United Arab Emirates​ (UAE). The billboards feature photographs of Emirati princes and express thanks to them for paying for a wedding ceremony for 400 young men and women from Gaza, scheduled for April 4.

Just last month, billboards commemorated the 36-year anniversary of Iran’s Islamic Revolution, featuring a photo of Al-Aqsa Mosque alongside the flags of Palestine, Iran and Hezbollah. They read: “Congratulations to the Tehran-Jerusalem Axis. 36 years of pride and independence.” The billboard did not bear the signature of any party.

Following the three most recent wars on the Gaza Strip, in 2008-09, 2012 and 2014, billboards thanking the Islamic Republic of Iran appeared. One read: “Thanks and gratitude for Iran” in Arabic, Hebrew, Farsi and English.

Iran has provided rather generous financial and military support to Islamic Jihad and the Popular Front for the Liberation of Palestine. Iran also provided such support to Hamas until the recent rupture in relations between the two, as a result of differences over the Syrian issue and the withdrawal of Hamas' leadership from Damascus

The largest and most popular billboards were erected when Qatar’s Prince Sheikh Hamad bin Khalifa Al Thani visited the Gaza Strip in October 2012. The billboards read “Thank you, Qatar,” and included photos of the prince next to Ismail Haniyeh, the prime minister of the Hamas government at the time.

Under Hamas’ rule, Qatar is Gaza’s biggest financial supporter. The emirate donated nearly half a billion dollars when its prince visited Gaza. The funds went toward infrastructure, housing and specialized hospital projects.

An official Interior Ministry source in the Gaza Strip told Al-Monitor on condition of anonymity, “There are certain parties — Palestinian organizations, usually — that put up those billboards in Gaza’s streets to express a political stance vis-a-vis certain countries or figures, with the approval of the security services, which monitor the billboards’ content.”

“We do not interfere in the billboards’ written content, and we do not mind putting them up since those entities provide support to the besieged Gaza Strip, although certain billboards might overlap others that have been previously put up by different parties,” he added, in reference to the billboards related to Iran.

During the term of Egyptian President Mohammed Morsi, billboards depicted Morsi and Haniyeh together, demonstrating Egypt's political support for the Hamas government.

A billboard put up by Hamas in Gaza City's al-Saraya Square in April 2014 stirred controversy on the Palestinian street. It featured photos of Haniyeh and Hamas political bureau head Khaled Meshaal, alongside Qatari Prince Tamim bin Hamad  Al Thani, his father and Turkish President Recep Tayyip Erdogan. The billboard read: “Jerusalem is waiting for the men.”

Mahmoud Ouda told Al-Monitor, “There are countries that financially support the Gaza Strip, and the people benefit from this money around here. Why not thank and praise them, while there are other parties that do not offer anything to the Strip but instead fight it and impede the flow of funding?”

Ouda's friend, Ibrahim al-Zamili, an accountant, told Al-Monitor, “These billboards are a sign of weakness and make the Palestinians look as if they are only asking for money. We look like beggars, but we are a free people that do not accept to be humiliated.”

Palestine's internal political divisions are reflected in Palestinians' positions toward various Arab countries. The billboards receive wide acclaim among Hamas supporters when they salute a country that supports the movement. However, Fatah supporters loyal to Dahlan express support for billboards thanking the UAE.

Yet, in spite of all the financial support provided by these countries and the billboards expressing gratitude for such aid, the Gaza Strip is still under a tight siege and unemployment continues to rise. “We want freedom, not money,” Zamili said.