Lebanon has been invited to the Armenian Genocide Centennial in Yerevan, as well as to the commemoration of the Battle of Gallipoli in Ankara, which will both be held on the same day, thus raising questions about Lebanon’s stance regarding the 1915 Armenian massacres. 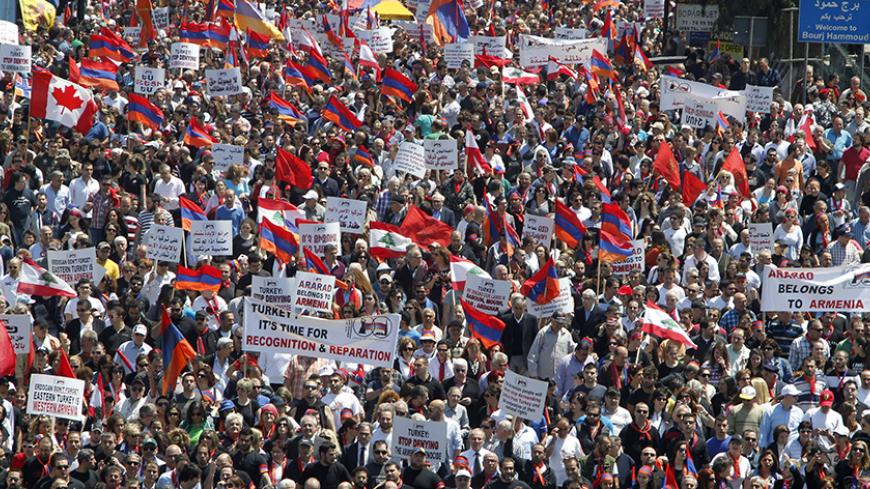 Lebanese of Armenian descent carry banners as they wave Lebanese and Armenian flags during a march from Bourj Hammoud to downtown Beirut's Martyrs Square to mark the 98th anniversary of the mass killing of Armenians in the Ottoman Empire, April 24, 2013. - REUTERS/Sharif Karim

A latent conflict between Turkey and Armenia has erupted in Beirut over the commemoration of the Armenian Genocide Centennial, particularly in terms of the Lebanese authorities’ stance regarding the celebrations that will be held to mark the occasion.

Lebanon counts a large Armenian community that may be the most prominent among the Armenian diaspora. There are nearly 150,000 Lebanese Armenians, who have an active economic presence in Lebanon, in addition to their participation in the Lebanese political and constitutional system. They have a permanent ministerial share of one or two ministers, depending on the size of the Cabinet, as well as six parliament seats, four of which are in Beirut, where the majority of the Lebanese Armenians live.

The Lebanese Armenian community — Orthodox and Catholic Christian — is firmly preserving its Armenian roots. The Armenian language is taught in the community's own schools, and the majority of the Armenians are affiliated with the Lebanese Armenian political parties. Large Armenian groups live in Armenian-majority areas, such as in some neighborhoods of Beirut and on the northern Metn coast in Mount Lebanon, adjacent to Beirut.

The Lebanese Armenian community constitutes a special case in terms of its involvement in Lebanese society on the one hand, and the preservation of its historic memory on the other. The Armenian community came to Lebanon after being persecuted by the Turks 100 years ago — a persecution that resulted in massacres, tragedies and attempts to exterminate its people.

A large number of Lebanon’s Christians share the Armenians’ memory of suffering from the Turkish Ottoman persecution. History books used in Lebanese schools write about the Ottoman occupation of Lebanon, which coincided with the Armenian massacre in the early 20th century, intended to starve Mount Lebanon's Christians. This resulted in one-third of Mount Lebanon's population starved to death or killed by the Ottomans during World War I. The large statue in Martyrs' Square in downtown Beirut commemorates dozens of journalists, militants and politicians from all sects who were hanged by the Ottoman authorities in 1915-16 for calling for the independence of Lebanon and opposing the Turkish occupation.

Turkey has refused to recognize the Armenian tragedy. In today’s political reality in the Middle East, Turkey is considered a Sunni Muslim country that interacts with the region’s countries against the backdrop of the current sectarian separation in the Middle East. Lebanon is part of this region, and of this separation to a large extent. The post of Lebanese premier, according to the sectarian power-sharing in Lebanon, should always be held by a Sunni Muslim.

According to a government source, who spoke to Al-Monitor on condition of anonymity, stances differ within the Lebanese state institutions. Christians in parliament support the Armenian point of view on those historical events and the international repercussions, whereas Muslims — especially Sunnis in the parliament — are friendly with Ankara, for political and economic reasons.

Armenia is preparing for a major international event in Yerevan on the occasion of the centennial of the 1915 events, the annual commemoration of which takes place April 24. A large number of heads of state have been invited to attend the event, which Armenia wants to be an occasion to renew the demand that the Armenian genocide by the Ottoman Empire is internationally recognized.

Turkey has scrambled to organize the commemoration for the 100th anniversary of the Battle of Gallipoli, on the same day, April 24. During this battle, which occurred between April 25, 1915, and Jan. 9, 1926, Mustafa Kemal Ataturk's army triumphed over the Allies in World War I. It was clear that by picking the same date to hold the ceremony, Turkey intended to respond to Armenia and to corner government representatives invited to choose between the event in Ankara or the one in Yerevan.

In this context, Lebanon has received two invitations: an invitation from Armenia to attend the official Yerevan ceremony, and another one from Turkey to participate in the ceremony commemorating the Battle of Gallipoli. This has ignited the Armenian-Turkish conflict within the Lebanese state. Christians are more inclined to refuse to participate in Ankara’s ceremony, in solidarity with the Lebanese Armenians who are represented in Beirut’s government and parliament, and to condemn Turkey's role in Lebanon under the Ottoman occupation. Meanwhile, Sunnis are likely to take part in the Turkish ceremony, to maintain friendly ties and nurture political and economic co-operation.

Two different points of view are now expressed by two communities within the Cabinet and by two individuals who have received an Armenian and Turkish invitation — namely the prime minister, a Sunni, and the minister of foreign affairs, a Christian. The latter is expected to boycott the Ankara event, and the former or his representative is expected to boycott the Yerevan ceremony.

According to the government source, Lebanon will thus be officially participating in both events. Lebanese Prime Minister Tammam Salam or his representative will attend Ankara’s ceremony, while Minister of Foreign Affairs Gebran Bassil will take part in the Yerevan ceremony.

Officials from Christian and Armenian parties told Al-Monitor that the Lebanese Armenian political parties, as well as other Christian political forces, are preparing for a series of activities in Beirut, in support of the Armenian cause, between April 24 and May 6, to condemn the Turkish stance and embarrass the premier for his position in what seems to be an ongoing Ankara-Yerevan war in Beirut.