Many Lebanese female entrepreneurs and designers have made it internationally, revolutionizing the perception of Lebanon’s fashion. 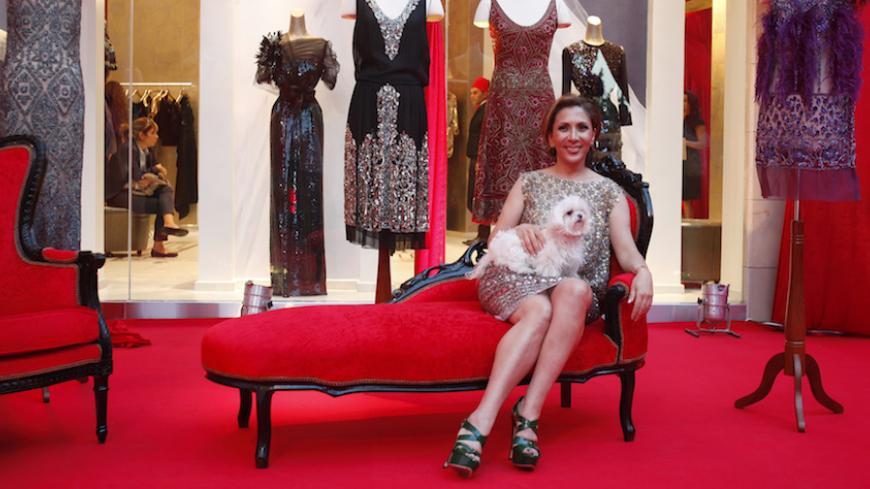 Lebanese-American designer Reem Acra sits with her dog Loulou during the opening of the first Reem Acra boutique in downtown Beirut, Nov. 3, 2010.

Lebanon has always prided itself in the entrepreneurship of its business community, with more and more women setting up their own ventures.

One prominent woman entrepreneur is no other than Reem Acra, whose fairy-like wedding dresses have been showcased on international catwalks. The Lebanese started designing when she was attending the American University of Beirut in 1982 before grabbing the world’s attention with her glamorous yet fashionably simple creations.

Other Lebanese women have been equally successful. Such is the case of Nada Debs, an acclaimed architect whose furniture designs are the result of a careful creative process embracing the craftsmanship of oriental furniture as well as Asian sobriety.

Debs’ creations boast intricate arabesque patterns contrasting with simple lines, her chairs and tables offering strikingly functional forms. The Eastern minimalism that infuses her work and is drawn from her childhood in Japan has been integrated to Debs Oriental heritage. Her designs are considered as art pieces and featured in museums such as the Arab Museum for Modern Art in Qatar. One of Deb’s creations, her Concrete Carpet, was also short-listed in 2013 by no other than the British Victoria and Albert museum for the Jameel Prize, which is awarded to contemporary artists and designers who have used Islamic traditions of art, craft and design.

In a previous interview for Bold magazine with the author, Debs said her inspiration came to her while she was trying to understand the Arab world, which she was not familiar with. “However as I learnt more about this part of the world, through my work, I discovered its rich past and it helped me resolve my dual identity,” she explained.

Debs’ company owns several retail outlets throughout Beirut: the Nada Debs Gallery, which displays the “East & East” and “Contemporary” collections, and two Nada Debs Boutiques, which carry her home accessory lines. Globally, Debs is represented in a dozen or so countries, and her items have appeared in over 120 magazines. East and East today has about 42 full-time employees and over 100 artisans who work from around Lebanon.

Sarah Beydoun is another Lebanese entrepreneur and designer, whose creations — mostly handbags — are every season’s must have. Sarah’s bags have been seen carried by the likes of Queen Rania of Jordan as well as Amal Takieddine Clooney. Beydoun, who produces a line of artisan handbags among other items, developed her idea while doing a thesis on women imprisoned for prostitution. The Sarah’s Bag label has been built around the concept of a corporate responsible fashion house. Beydoun works alongside a staff of designers while using female prisoners to execute her designs.

As a result, Beydoun currently employs over 50 women in the prisons of Baabda and Tripoli alongside a team of 150 other women, including former prisoners. “It is funny to see how these women prisoners have become in a way their own bosses and now that they are managing their own team, have gained acceptance after they left prison."

Beydoun, who went to her first trade fair with 12 handbags, now sells between 8,000 and 10,000 items anually, including accessories (towels, beach bags and wallets). The Lebanese label has expanded and is now carried in over 35 stores around the world from Europe, Japan, as well as Arab countries. “Interestingly, Japan represents our biggest market,” Beydoun said.

Fashion has been a source of inspiration for two other young Lebanese, Serene Abbas and Narina Najm, who met at the ad agency GWT before launching, with their associate Jad Sarout, Raghunter, a fashion search engine, in December 2012.

“Today Raghunter has become every city's local fashion guide, helping fashion tourists discover stores and designers they don't have back home,” Abbas said. Currently, Raghunter is available in Beirut and will be expanding to Dubai and Paris in 2015. The site offers an online magazine, The Kill, that produces relevant content covering the local fashion market, according to Abbas.

Raghunter’s presence online is steadily increasing, currently receiving about 50,000 visits per month, which can be broken down to 70% of female viewers and 30% male, mostly between the ages of 18 and 35, Abbas added.

For these women, operating in Lebanon has come with its set of difficulties. Beydoun admits that the economic situation represents a big challenge for many entrepreneurs. Other problems are tied to the expansion and growth from a one-person business to large companies. Beydoun started Sarah’s Bag with capital of $200. “As I grew, I had to move from an entrepreneur business to a proper company structure, which required outside expertise,” Beydoun said.

Debs was supported in her work by the international nongovernmental organization Endeavor, which identifies talented entrepreneurs in emerging markets, mentors them, introduces them to sources of capital and provides them access to key networks.

Another challenge faced by some female entrepreneurs was imposing and maintaining quality standards. Beydoun recognizes she had to change the way her artisans were working. “I had to organize them and teach them about quality control as well; everyone of our items is carefully checked,” she explains.

When Debs first started, some local artisans she worked with copied her ideas. “I discovered the hard way that I had to make artisans sign confidentiality agreements,” she added. Debs is now careful about outsourcing and has internalized much of the basic work, from graphics to the design process.

In spite of such difficulties, these young women have, each in their own way, helped revolutionize the Middle East perception of Lebanese fashion and design, which has become tantamount to sophistication and excellence.

For Nagy Risk, a specialist of small and medium-sized enterprises, there is an opportunity for Lebanese female entrepreneurs “as their movement has gained tremendous momentum.”