Many Iraqi Christian refugees have given up on the Middle East and refuse to ever go back to Iraq, even if the Islamic State is completely annihilated. 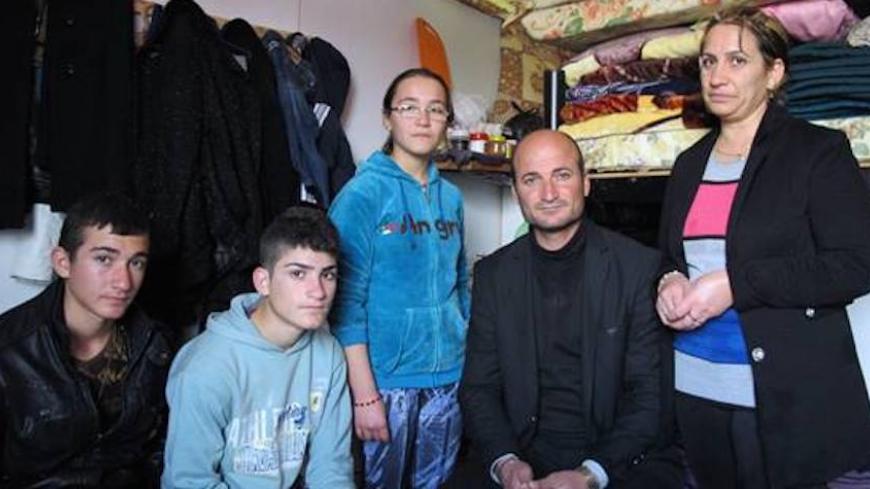 Iraqi refugee Nadjm, 43, sits with his wife and children in their small room in the Mar Youssef Church in Amman. - Brenda Stoter

AMMAN, Jordan — His teenage daughter being married to an Islamic State (IS) fighter, his wife being forced to convert to Islam and his sons being trained by militants in the Islamic State's children's training camps.

These are just a few images Nadjm’s imagined when he was driving from Mosul to elsewhere in northern Iraq in August 2014. Clothing, photos and other personal belongings were left behind. There was no time for packing.

"We got a call that ‘Daesh’ (the Arabic acronym for IS) was coming. In just a few hours, all Christians in our village decided to flee. People even forgot to take their passports. It was a huge mess,’’ Nadjm, 43, recalls.

He and his family members stayed in the Kurdish Regional Government (KRG) region in northern Iraq for a few months. Since November 2014, he has lived with his wife and four children in the Mar Youssef Church in Amman. According to a spokesman for Caritas, around 1,000 Iraqi Christians currently live in Jordan’s churches, after they fled to northern Iraq. In the Mar Youssef Church around 18 families, 76 people in total, found shelter in the center that is usually used to celebrate Christian fests such as Christmas.

On the wall in Nadjm’s room hangs a portrait of the Virgin Mary, alongside a rosary. In the corner of the room his youngest son is sleeping. Nadjm's other kids are just sitting, walking in and out, basically doing nothing. All of them are bored.

"The last thing we heard is that members of IS took over our house. Picture this: us sitting here, with six people in a room of a few square meters, without anything, while they are walking in our living room, sitting on our couch, among our personal belongings," Nadjm told Al-Monitor.

Nadjm mentions that militants sometimes call phone numbers found on cell phones that people left behind. According to him, IS members try to find out who the owner of the house is so that they can then offer them to buy back their own house and pay a monthly tax.

Personally, Nadjm doesn’t know anyone who accepted the “offer.”

"If we decide to return, they will murder us for sure,’’ he added.

According to the Christian organization Open Doors, almost the entire Christian community has left Mosul and its surrounding areas after IS took over the area. Around 140,000 Christians went to the KRG or abroad. In the best-case scenario, Christians living in areas taken over by IS are treated as second-class citizens. They have to pay a special tax and are not allowed to wear religious symbols. In the worst-case scenario, they are forced to convert to Islam and run the risk of being kidnapped and beheaded.

Iraqi refugees who fled to the KRG were being transferred to Jordan with the help of local priests and the government, the spokesperson of Caritas explained. "King Abdullah II also had a share in this. After speaking with one of our priests, the king ensured him that the Christian refugees were welcome in Jordan,” he said, adding that visa and transportation were arranged soon after that conversation.

Although only 5% of the Jordanian population is Christian, the country is seen as a beacon of stability and tolerance, but most of all as a safe haven for refugees. King Abdullah II, who once called the fight against IS a "Third World War," emphasized multiple times that coexistence and mutual respect between Muslims and Christians is crucial for defense against religious extremism.

“Jordan is a Muslim country, with a deeply rooted Christian community. Together, the Jordanian people make up an indivisible society, friends and partners in building our country. I am outraged and grieved by the recent attacks in some countries against Christian and minority communities,” Abdullah said, addressing the European Parliament in Strasbourg on March 10.

Hinda, 68, a widow who also fled from her village Bashiqa, an Assyrian town located in the Mosul district, said that she felt no discrimination as a Christian in Jordan, but believes that IS is trying to create religious discord in the country as Jordan is stepping up its role in the international coalition against the terrorist group after the brutal murder of Jordanian fighter pilot Moath al-Kasasbeh.

But that is not the only reason why she has become skeptical. In her room, which she shares with another single woman, she talks about the rise of IS and the US invasion of Iraq in 2003.

"After 2003, sectarian violence emerged. Kidnappings and attacks on Christian targets increased. Over the years, I have seen many Christians leave,” she said.

The estimated numbers of Christians who were living in Iraq before 2003 vary from 1 million to around 1.5 million. But repeated attacks by Islamist groups pushed many to leave, and now they are estimated at less than 300,000. According to Iraqi Christians, the once vibrant Christian community in Baghdad, for example, no longer exists.

Under Saddam Hussein's reign, the situation was much better, Hinda pointed out, an opinion shared by many Iraqi refugees in Jordan. Nadjm agrees. In 2010, he survived a series of bomb attacks on buses with Christian students. Nadjm was one of the bus drivers. One student died and 250 were wounded. Since the attack, he suffers from headaches and amnesia.

Hinda described the rise of IS as “the last straw” and added that she left with nothing but her clothes.

“I never thought I would ever leave my home, until I heard that Daesh was coming. Before, we were protected by the Kurdish peshmerga forces, but they also fled. At a certain point I did not even trust my Muslim neighbors — whom I have known almost my whole life.”

Many of the Iraqi refugees in the Mar Youssef Church are fed up with the situation in their country and with living in the Middle East in general. Nadjm explains that he wants to leave Jordan as soon as possible — not only because of the fact that he is part of a minority group, but also because of the lack of future prospects. He is planning to go to Europe, where his children can get a proper education, and is hopeful that his family will receive visas through the UN refugee agency.

"I never want to go back to Iraq, even if they kill all the IS fighters. Before it was al-Qaeda, now it’s the Islamic State and tomorrow it will be another group. It's a hopeless situation,” he added.

Three of Hinda’s children already left Iraq years ago to build a new life in Europe and the United States. She never wanted to join them, until recently.

Hinda added, "We must face the truth: In the Middle East, there is no place for us anymore. And I will never give up my faith. I simply love being a Christian.”