Lebanese foreign minister: UN needs to show its political will

In an interview with Al-Monitor, Lebanese Minister of Foreign Affairs and Emigrants Gebran Bassil asked for the international community to stop the flight of Christians and minorities from the region. 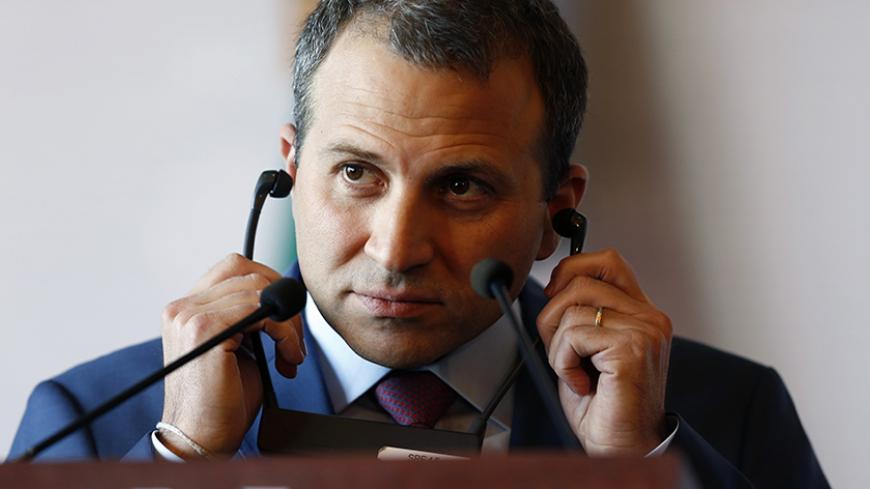 Lebanese Minister of Foreign Affairs and Emigrants Gebran Bassil addressed the UN Security Council on March 27 about the dire situation faced by minorities in the Middle East. Speaking with Al-Monitor after the session, Bassil said Christians in the Middle East have had no choice but to flee: “They are leaving. It is not a risk, it is a reality.”

Bassil criticized the United Nations, saying that “real political will is not well demonstrated” and called for a UN resolution to protect minorities.

The transcript of the interview follows:

Al-Monitor:  What are you here to convey to the UN Security Council regarding the situation facing minorities?

Bassil:  We are here first to describe the situation in its essence, that it is not about a religion. It is about a set of values. If they are ruined in our region, then they are ruined everywhere. If we cannot protect them, the holders of these values, if they cannot be protected in Lebanon in our region, then they are not protected anywhere because extremism and terrorism is spreading and there is no way we can stop it by the way the international community is dealing with it. The best way to preserve this pluralism and this ability to live together is by protecting the people who are carrying this message and who live it in the daily experience. It is us in the region who can play this role and who can fight to stay and who can protect our existence by protecting the Western societies. But we need to be supported politically, recognized for our role, not have our existence taken for granted and more than just politically by realizing how important it is for us to stay in the region in the battle and the fight against terrorism.

Al-Monitor:  There have been some mentions of the possibility of creating a state for Christians and other minorities in the Middle East, what are your thoughts on this?

Bassil:  It’s not the idea of creating an entity or state for Christians. There are many Christian states, if that is the word. It is our role to be able to coexist with others but we have to coexist in our personality, in our strength. This is where we need strength and we need to have [something] like we have in Lebanon: a full partnership in power. We are not for creating Christian states because this is a state that would be fighting with other states: Jewish state or Muslim state. No, we want to live in a pluralist society but to have the strength to impose our role and to have our rights. Since some groups in the region are having political backing and support, we should have more than this recognition, instead of facilitating us to leave the region because of how we are received here. We will be integrated here, it’s not a problem. Our importance is that we stay in the region where we are.

Al-Monitor:  Is there ever a risk that the Christians will leave the Middle East entirely?

Bassil:  They are leaving. It is not a risk, it is a reality. When you see their numbers decreasing in Bethlehem, for example, from 85% to 20%, what does this mean? In Jerusalem from 53% to 2%. In Lebanon. In Iraq from 2 million down to less than 300,000. So definitely they are leaving.

We should not only stop encouraging them to leave but we should bring those who left, 150 to 200 years ago, we should encourage them to return to the region, to their roots, because those people fled the region at the hands of the old Daesh [the Islamic State] of the 19th century.

The same Daesh who killed and massacred our people is still doing this now, it’s the same history. It’s the same repetition of events that led our people to flee the region. And what’s happening to us still in the region? We are having a more extremist, polarized society in the Middle East and this will be inevitability a confrontation of societies here. No one is safe. Did you see the number of people who tweeted from the [United] States in support of Daesh? There was a study from Brookings Institution. The US was the second country [outside Iraq and Syria] and Lebanon was equal with the United Kingdom. So, what does this mean? This is not a remote conflict that we can cover our ears and shut our eyes on what is going on and think that the US is protecting. This is an epidemic ideology that is spreading everywhere very quickly. With technology through the Internet, people are being attracted to it. Why? Because people like to feel the strength and they see that there are 60 countries in the coalition not able to defeat Daesh. So Daesh is stronger than 60 countries.

We are saying we are able to carry the mission because this is our daily life that we live. We need support and recognition, not to form our own entities, not to have fighting with each other based on religion, but to have human values fighting with those who have no values at all. These are the times and this is how we can cherish our belonging to a set of values under the umbrella of international law, protected by international justice and secured by international peace and security in the world through the UN Security Council.

This is what we need as we are spending all our money and not being able to react to a massive deportation of 700,000 people from Yazidis and Christians and no action is taken. We know who is doing this, where, how the foreign fighters are getting to the region and no action yet is taken.

Bassil:  The major operations that are going on in the region should continue but they should be more fierce. Legitimate armies in the region should take up the fight and be supportive like our Lebanese army. More support, more arms. Only when we are well supported and fail to do the mission, then you can think of foreign military intervention.

We want a resolution from the Security Council for the protection of minorities, in all way, geographically, security and morally. Like what happened 100 years ago when the formation of our countries was based on the defeat of the Ottoman Empire and the League of Nations. So firsthand let’s have a UN resolution for the protection of the minorities and when this does not succeed then we can think of further actions.

For now the real political will is not well demonstrated. So let’s demonstrate it through three things that we asked for:

One: a Security Council resolution.

Two: to bring back the descendants of the region to their roots.

Three: to have a fund whereby we can rehabilitate populations, reconstruct what was demolished by the terrorists — and if there is a political will, these are three things that can be easily achieved.

Al-Monitor:  You mentioned earlier that Lebanon is a unique model of coexistence in the region, what are some lessons that Lebanon has learned that could be used by other countries?

Bassil:  In our case, this is how we live. If you make this model succeed then you can copy it. If you let it fail then it ends. So when we talk about the counternarrative of Daesh, if you don’t have a living example of coexistence, how can you promote it? So you have to have something good that is happening in real life, in Lebanon it is happening in reality. This is how we promote it and make it a model to be spread. Currently what is being spread is the model of Daesh.

Al-Monitor:  What role can religious organizations play in combating the rising tide of religious extremism and preventing the spread of IS?

Bassil:  We are touching a very sensitive issue. I think that each religion should be reformed from within, like what happened with Christianity. This is because it is a political game for some clerics in all religions.

In Islam this happens more because there is money that is financed by regimes and wealthy donors and because religion is more tied to the political life, there is no separation like you have here in Europe or the US. This is what makes religion used more and more as a political tool. This means it is promoted by every means because it is beneficial.

This is an area where it should not be allowed to use religion to finance extremists and to sue the teaching of religion to cause more provocation and frustration and hatred. It is misused in a way that is not similar to Islam in its essence but is simply Islamizing societies for political purposes. This is seen in many places in the world so this is why countering this should come from within the Muslim society. This is why moderates should be supported. Moderate or secular regimes should be preserved, instead of enforcing changes like what happened in our region through the Arab Spring with the end result being more extremism.