The Hamas-led security apparatuses in Gaza limits the ability of actresses to play parts in high-profile movies as they are forced to wear the veil and avoid contact with male co-stars. 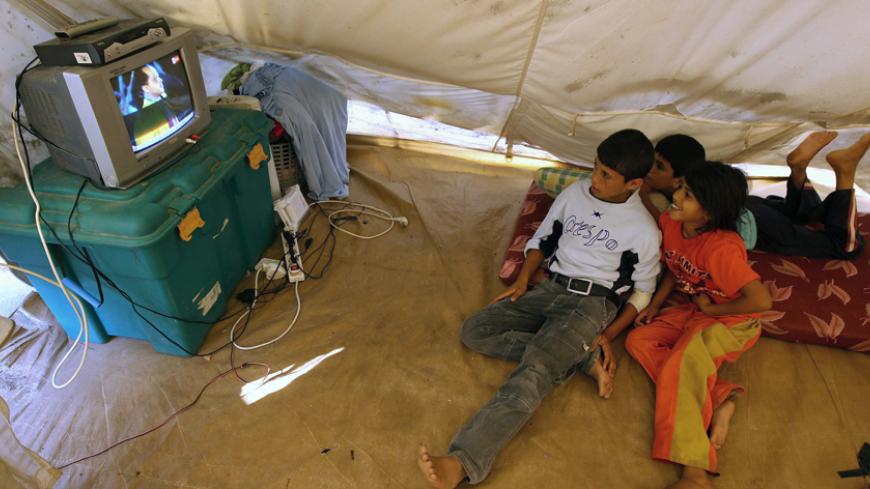 GAZA CITY, Gaza Strip — I downloaded the French-Tunisian movie “Blue is the Warmest Color,” particularly because it won the Palme d’Or at the Cannes Film Festival. Despite the chronic electricity shortages in Gaza, I downloaded and watched the movie depicting the lives of two lesbians with all their woes, disappointments and isolation, shedding light on the challenges of their sexuality. I was shocked by the explicit scenes in the movie. But Tunisian director Abdullatif Kechiche portrayed the scenes in an innovative and unrestrained way, integral to the plot.

The following morning, I was going to interview Palestinian actresses about the challenges they face in Gaza. Here, I was shocked in a different way, by the hypocrisy these actresses face.

“Abu Ayed Diaries” is a drama series produced in the Gaza Strip and shown on Hona al-Quds TV. The 15-minute episodes tackle everyday problems in Palestinian society through the story of a family, and mainly focus on issues between spouses Abu Ayed and Um Ayed. Each episode has been filmed in a different house – mainly owned by friends of the crew – because of the lack of studio space and production resources.

The problem of this oppression of actresses goes even further: Caution is advised during shooting when dealing with the three actresses. They keep their veils on even in the house that is supposed to be their home, which is not customary. Female actresses are not even allowed to approach male actors.

Zuhair al-Balbissi, starring as Abu Ayed, told Al-Monitor, "There is a clampdown on the industry, especially on set, due to societal norms. Real life cannot be depicted as is. We can't film a woman inside her house without her veil on, and we should stay away from bedrooms at all costs. If a mom wants to greet her son after a long [trip], she is content with a handshake, and even this can be banned."

For her part, actress Hiba Abdel Qatah, playing Um Ayed (her first role), told Al-Monitor that besides social limitations, the channel has limitations of its own. "I was wearing trousers in one of the episodes. They made me re-film it and wear a [long] skirt instead."

Abdel Qatah struggled to start her career as an actress and singer. But after her family members saw her on TV and her first patriotic song proved a hit, they allowed her to pursue her acting career.

Sally Abed, a TV host at Hona al-Quds, has a different standpoint. She said that although the channel was independent, it belonged to a political social movement that adhered to strict social beliefs. Abed previously starred in a children's movie titled "Kan Ya Ma Kan" ("Once Upon a Time"). The movie won an award at the Cairo International Film Festival and was the first and last stop in her acting career.

She quoted the saying by Constantin Stanislavski: “Give me a theater, and I will give you a nation,” underlining the importance of acting in conveying messages that even the most prominent politicians cannot convey. "The lack of female actresses is sadly related to them not being taken seriously," she told Al-Monitor. "We lack a system that trains, educates, and respects actors and actresses and give them their material and moral rights."

Abed accepted taking part in the movie because it was a children's movie without any scenes with men. "I acknowledge that the acting career has a bad reputation in our society despite its paramount importance," she said.

Wissam Yassine, an al-Hurra TV reporter who previously worked as an actress, slowly withdrew from acting. "It was somehow an unintentional withdrawal, and not for societal reasons," she said. "The entertainment field is not presenting comprehensive works. The theater lacks an avid audience. Those who come are the elite and not one play lasts farther than the premier show."

She noted that had she found a respectful and comprehensive production whose goal is art and theater, and was not just funded by a certain institution, she would have not been reluctant for a second to go back into acting.

She said that female actresses in Gaza are currently hired to either fill gaps or to promote the work. Their talent does not matter. What matters is that they get their family's approval.

Talented actress Fayqa al-Najjar, 24, who has starred in more than 20 films and seven plays, relayed her impressions to Al-Monitor. "I struggled a lot throughout my career path with the societal view of me due to my work, and my family's support for my talent and freedom. I also struggled with some of my colleagues who confused my friendliness for flirting," she said. "I also struggled with security men who would stop me at checkpoints while moving from Gaza City to Khan Younis with the crew. They would ask them about our destination and mock us when they learn we were actors and actresses. They quickly would advise me to wear a veil."

Najjar noted that one time they tried to investigate her, yet she strongly refused. "I do not believe I am doing anything wrong. To the contrary, I conveyed an important message to society through all my works. Those [people], however, cannot see it."

The table was soon turned when Najjar was called up to act in a movie produced by al-Aqsa TV, affiliated with Hamas, as are security forces and apparels in Gaza.

Najjar said: "Of course, I played the role of a veiled woman in a movie titled '16 hours in Karm Tzur.' It was a nice, beneficial experience. Many people got to know me through this movie. I blamed them for the behavior of security forces. I told Al-Aqsa TV, 'If you do not believe in female actresses, why do you ask us to participate in your movies?'"

The freedom of acting reflects the freedom of expression. Gaza is living the era of veiled actresses, reflecting different aspects of life here. This does not mean that what's required right now is to have freedom similar to Europe, but to have a normal, realistic acting plot without obsessing about it.