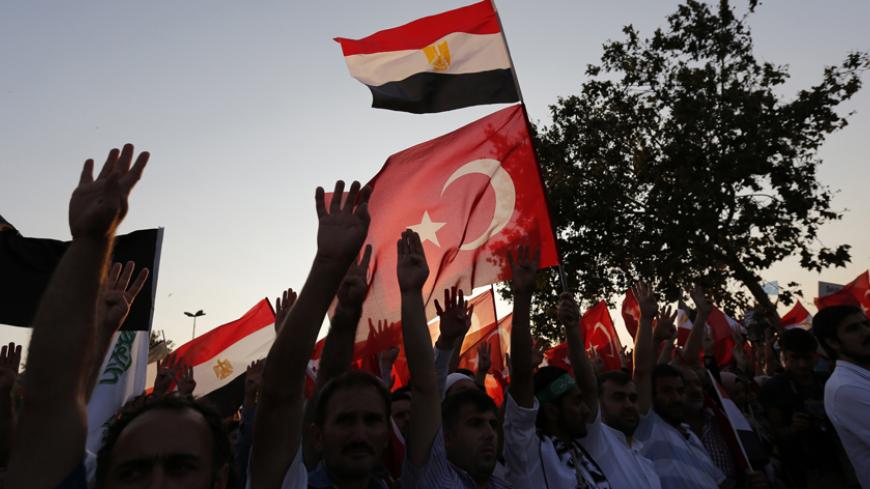 Supporters of Egypt's deposed Islamist President Mohammed Morsi and the Muslim Brotherhood wave Turkish and Egyptian flags during a rally in protest against violence in Egypt, outside of the Eminonu New Mosque in Istanbul, Aug. 17, 2013. - REUTERS/Murad Sezer

In another sign of its common front against the Muslim Brotherhood, the Gulf Cooperation Council decided in its Dec. 19 meeting to extend full support to the Egyptian government under President Abdel Fattah al-Sisi and to normalize Qatar-Cairo relations. Inevitably, the focus then switched to Ankara and the question of whether now that Qatari Emir Tamim bin Hamad Al Thani has reversed course, his spiritual twin Turkish President Recep Tayyip Erdogan will also make up with Cairo.

There was some hope that the Turkish government will use the March 22-23 parliamentary elections in Egypt as an opportunity to turn a new page in relations. After all, Turkey’s condition of normalizing relations was the ending of oppression and return to democracy. Parliamentary elections and the emergence of a new government would have offered Turkey a face-saving way to reverse its stance against Egypt.

While some in the government would like to improve relations with Egypt, several events have spoiled the optimistic atmosphere. One crucial development was the Istanbul meeting of the Muslim Brotherhood’s Freedom and Justice Party deputies in December 2014 and their declaration that all decisions by the "coup regime" are invalid, marking a new arena of political struggle against Egypt by the Brotherhood parliament-in-exile via Turkey.

Following the death of the Saudi king and his replacement, Ankara's government circles hoped that the new king, parallel to the Shiites toppling the government in Yemen, may give priority to the struggle with Iran instead of going after Islamists. As part of that strategy, the new king could cut the support to Sisi and remove the Brotherhood from the terror list. In that case, Sisi would be isolated and Turkey’s current position that the Egyptian government is illegitimate would gain traction. These expectations have been voiced by figures close to the Muslim Brotherhood and the Syrian opposition.

One TV station with ties to the Brotherhood aired the comment, “With the death of King Abdullah, Sisi’s spine is broken.”

Ashraf Abdulgaffar, the Brotherhood's representative in Turkey, went further, claiming, “The Egyptian coup regime, under the pretext of sending 20,000 Egyptian soldiers to fight Houthis in Yemen, was planning to send them to Saudi Arabia to actively take part in a coup plot against the new king.”

Although the likelihood of Saudi Arabia toughening its account-settling with Iran sounds more realistic, there are no signs of a coming policy change regarding the Brotherhood and Egypt. Saudi officials who led the campaign against the organization are keeping their posts in the new administration. Whether factual or not, Egypt's Youm7 newspaper reported that Saudi Arabia, Kuwait and the United Arab Emirates (UAE) are going to give $10 billion in assistance to Egypt. Perhaps this news item on the eve of the investment summit to decide on the support to Sisi is telling us not to jump to early conclusions.

Another development that triggered a return to the early days of vicious polemics between Turkey and Egypt was the broadcasts of Istanbul-based Brotherhood TV stations to provoke violence in Egypt.

Reports say Rabia, Misr al An, Al Sharq and Mukemmelin are transmitting from Istanbul. Muhammed Nasir, a commentator on Misr al An TV, said the "revolutionary youth are watching the residences of police chiefs" and warned their wives to "keep your spouses under control, otherwise your children will be orphaned." Nasir called on the Egyptian youth to “give up peaceful actions against bullets. It is time to start violent struggle.” Rabia TV reported that a group calling itself the Revolutionary Youth Leadership has warned foreigners in Egypt to leave the country by Feb. 11. The group reportedly asked foreign companies and diplomatic missions to end their operations in the country. Rabia TV defended itself, saying, "As part of the coup regime media's defaming campaign, false news about our channel was produced. We had said, while introducing that warning report, that we will seek to uncover reality with our guests. This means we don't assume the truth in that so-called warning declaration.”

Turkey’s state-owned Anatolian Agency reported Muslim Brotherhood representative Ahmed Rani as declaring, “Ikhwan rejects threats against foreigners.” Nevertheless, the declaration by representative Ashraf Abdulgaffar that the Brotherhood is going to revise its strategy and follow a policy of "an eye for an eye" has caused confusion. Abdulgaffar said the group has changed its concept of peace and henceforth labels it the “pain-inflicting peace movement.” He added, "It is because we are being killed. For 19 months, we have been calling for peace. The other side doesn’t understand it. We are now in the retaliation phase. They must taste pain, because there are traitors. My message to the Egyptian people is this: Stand firm and be ready for all sacrifices and prices to be paid. At the end, the victory will be with Egyptians.”

These comments led to fear that the Syrian scenario is about to be shifted to Egypt. But Hayrettin Karaman, who has emerged as the source of fatwas for the Turkish government, in his daily Yeni Safak article, used language that favored the robust struggle against Sisi. He wrote, “Representatives of legitimacy in Egypt have been killed for 19 months, hurt and thrown to dungeons. Now if they use their right of legitimate self defense and take up arms, I am not going to denounce them but the coup makers and their supporters.”

In another development contributing to mounting tensions, Egypt confirmed the death sentences of 183 people. While Cairo was accusing Turkey of embracing those provoking terror, Ankara tried to get the upper hand by harshly criticizing the death sentences.

Egypt replied by reminding Turkey of its own human rights record and described Turkey as a country encouraging violence and terror. The Egyptian Foreign Ministry called Turkey’s charge d’affaires and issued a warning. A spokesman for the Turkish Foreign Ministry, Tanju Bilgic, hit back at Cairo, saying, “The statement of the Ministry of Foreign Affairs of Egypt, dated Feb. 4, 2015, constitutes the most recent tragicomic effort of the Egyptian coup rulers, whose understanding of state government is based on a triangle of weapons, oppression and persecution.

"It is obvious that the current regime in Egypt, which considers persecution and tyranny a method of governance, has nothing in common with contemporary democracies that are devoted to fundamental rights and freedoms.”

Logoglu told Al-Monitor that he has no more hope that Turkey-Egypt relations can be improved in the short term. He said, “An anti-Sisi attitude prevails here. On the other side, there is an Egyptian administration that reacts very strongly. Under these circumstances, any step by Turkey will not be convincing. I don’t expect a step in the short term that will restore relations with Egypt. These relations have to improve because our government’s current Egypt policy is marginalizing Turkey in the region. We have to speak with more constructive language.”

The Turkish Foreign Ministry and other relevant officials evaded the issue by saying they have no authority to stop the broadcasts, but that they could investigate if there is a complaint.

A Foreign Ministry official responding to Al-Monitor’s questions on condition of anonymity said measures can be taken if there is legal issue, but at the moment there was no such initiative. He said, “Of course, we won’t allow the encouraging of terror. We don’t consider the Muslim Brotherhood a terror organization. Anyone living in Turkey with a residence permit can use freedom of expression like Turkish citizens and express their views.” The official said there are no preparations to normalize relations with Egypt in the near future. Asked if he forecasts the normalization of relations following the coming Turkish elections, he said, “If oppression ends, if the political ban on the Brotherhood is annulled and the transition to democracy is made, why not?”

The death of the Saudi king, TV broadcasts from Istanbul and arson against two UAE banks in Egypt in reaction to the death sentences are all signs of mounting tension. All indicators suggest that the Muslim Brotherhood is changing its ways. Violent action to foil the investment summit in March and the role of the Istanbul-based Brotherhood in these actions casts serious suspicions on Turkey. The slogan of “armed resistance for self-defense” is slowly being transferred to Egypt. Such a process, unless rectified, puts Turkey in a hard to justify position.