Despite the Egyptian army's claims to victory over terrorists in the Sinai Peninsula, terrorist attacks have increased, a trend many attribute to the failure of the army's strategy. 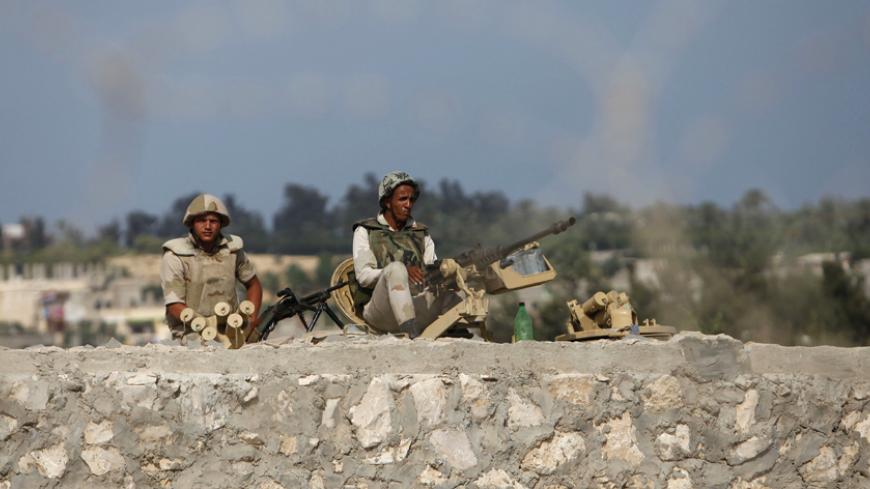 EL-ARISH, Egypt — With terrorist attacks on the rise in the Sinai Peninsula — most notably the targeting of the Egyptian army's Battalion 101 and the Karam al-Kawadis military base — concerned parties are raising the question: Why is the Egyptian army failing to address terrorism in Sinai?

This question comes a year and a half after the army announced its war on terrorism, and the Egyptian government is not providing any real answers. The issue cannot even be discussed in the Egyptian media, since the ruling authorities have imposed such strict censorship on the media that they are now just tools of the army, incapable of uttering the truth. Following each terrorist attack, soldiers appear on media outlets as experts and analysts, justifying security failures and portraying these lapses as victories for the Egyptian people, only to be surprised by the death of dozens more soldiers in other violent attacks.

Gathering facts and information to answer this question amid tight security measures is very difficult. However, Al-Monitor succeeded in contacting an officer who participated in military operations in Sinai. He said that the failure was due to the Egyptian army's traditional and routine strategies, which are unsuitable in a fight against a terrorist group that knows Sinai like the back of its hand.

The officer told Al-Monitor on condition of anonymity, “When I came to Sinai, I did not know anything in particular about the place, and everything I knew in advance, I had studied at the military college about questioning the patriotism of Sinai’s residents. I was surprised to find out after several months that without the people of Sinai, we cannot accomplish any military achievement in a desert whose details we have yet to discover.

“I’m only talking because I fear for my country, which I have sworn to protect. I am speaking in complete honesty so that President [Abdel Fattah] al-Sisi, whom I respect and [through whom I] see a future for Egypt, can understand that if he does not pay enough attention to what is taking place in Sinai, Egypt will fall and it will be the 1967 Six-Day War all over again.”

To further illustrate the reasons behind the security failure, the officer said, “The first and most important reason is that we lack information that is supposed to be an important element of the intelligence services. From my experience, it seems that the intelligence officials are working on gathering information by staying inside their air-conditioned offices.”

He referred to “the daily routine practiced in military campaigns,” saying, “We go out and move with heavy military equipment used in systemic wars among civilians, and this is forced labor, like homework. After each daily campaign, we have to go out and report to the leaders to demonstrate the continuity of our movement. We are forced to burn the nests [huts made of reeds and palm leaves where the poor live or that are used by tribal leaders as councils], which we call terrorist hotbeds, burn cars and motorbikes and make random arrests in targeted areas in Sheikh Zuweid and Rafah. This is where terrorists hide, and this is routinely published on the military spokesman’s page.”

“The third reason stems from having to put pressure on detainees and subject them to severe torture to get any information, and this leads to the gradual loss of loved ones’ sympathy for the army, especially since the majority of detainees are innocent,” he said.

Regarding the military’s achievements in eliminating terrorists, the officer refused to make any additional comments. However, a Sinai sheikh who is close to the intelligence agencies told Al-Monitor that the real results are not satisfactory. “The army has the determination and ability to cleanse Sinai in a record-breaking period of time, but the bureaucracy and the inadequate identification of the problem by some leaders who are not professional enough to understand the reality of Sinai make the army’s task in eliminating terrorism almost impossible,” he said. “The leaders who are planning the war on terrorism in Sinai do not know much about the area on the demographic level, and this will result in drowning the peninsula.”

Shahat tried to avoid making the same mistake as Wasfi, but he also exaggerated the extent of the army's control over the situation in Sinai and the progress of the war on terrorism, publishing figures on said accomplishments that Sinai residents described as imaginary.

Despite military statements claiming progress in eliminating terrorism in Sinai, observers were surprised to see a major spike in terrorist attacks. After the January 2015 el-Arish attacks, Sisi authorized the formation of what he called “the unified command of the east of the canal,” under which both the second and third field armies will participate in the anti-terrorism mission in Sinai, instead of the second army alone.

An expert on Sinai affairs told Al-Monitor that the solution is not about changing people. On condition of anonymity, he said, “The problem is in changing the mindset of people in the development of professional strategies to tackle terrorism, by relying on the speed of understanding what is going on in Sinai before it is too late. … Since the beginning of the war on terrorism in August 2013, dozens of leaders and officers in charge of Sinai were changed. Whether they were high-ranking leaders or field campaign leaders, the mentality of implementation is one, and it will certainly result in failures and increasing grievances among civilians.

“The old military mentality will only drag us into the same situation as Iraq or Afghanistan or Syria. Therefore, if the current political leadership wants to eliminate terrorism and eradicate it from its roots, we first must immediately stop tampering and increasing grievances among the innocent, since grievances represent the largest breeding ground for terrorism. Second, we must gain the confidence of the people of Sinai and give them real guarantees for the recognition of their state and their right to citizenship and development, as well as involve them in finding solutions to the problem. Third, we should authorize professional forces from the army and police to fight terrorism, such as the police’s international anti-terrorism units, the Thunderbolt teams [naval forces] and the army’s special forces. In addition, we must immediately abandon systemic warfare in an urban area where terrorists know exactly how to move and where to hide.”

Activists and individuals concerned with the Sinai issue believe the Egyptian government needs to reconsider its war strategies if it wants to stop breeding extremism and eliminate an enemy that is destroying a land that dreams of stability.