Russia wants to increase its regional presence in the Arab world, and having Egypt share the Russian narrative of regional dynamics is a way out of its isolation. 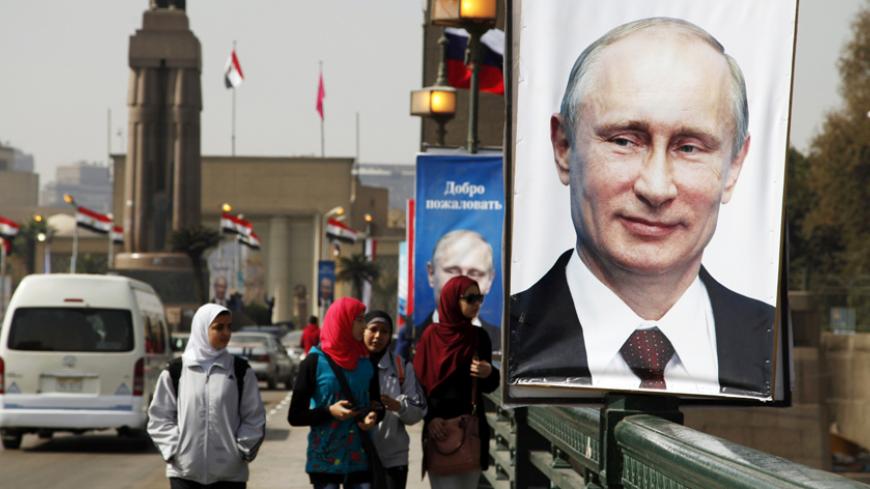 Girls walk past a banner with a picture of Russian President Vladimir Putin along a bridge, in central Cairo, Feb. 9, 2015. - REUTERS/Asmaa Waguih

Russia's pursuit of new strongholds outside Europe has entered another phase. Previously Moscow was looking for new regional venues where its presence will be welcomed. Now, it seems Russia has not only found them, but has identified critical partners in these regions and is gradually making moves to build up relations with them. In this calculation, Egypt is a pivotal state.

Both the symbolism and the details of President Vladimir Putin's two-day visit to Egypt are indeed impressive. The Russian president received a warm welcome in Cairo, saluted by an honor guard while the city itself was decorated with Russian flags and Putin's portraits — a stark contrast to how the Russian elite is treated in the West. Many Russian commentators saw a symbolic gesture to Western states: Russia is anything but isolated, while Europe is no longer the promised land for the state that seeks recognition of its global influence.

Russian media hailed the visit as ''landmark,'' which it is, as the first trip by the Russian president to Egypt in 10 years. Putin and Egyptian President Abdel Fattah al-Sisi had previously met on several occasions and seemed to have had good chemistry. Now they feel it is time to transform the relationship between leaders into a comprehensive relationship between countries. The large and diverse delegation accompanying Putin included experts in energy, economics, agriculture, the nuclear and even space development industries, emphasizing the areas of cooperation on the bilateral agenda. Also, the two countries are seriously considering using their national currencies for bilateral trade, to be less dependent on the dollar and more immune to fluctuations of currency rates. Trade itself is on the rise, with $4.5 billion in 2014 — one and a half times the size of that in 2013. Egypt is a second most popular destination for Russian tourists (after the Turkish sea resort of Antalya), with more than 3 million people visiting Egyptian resorts in 2014 alone.

Military cooperation is another matter of special importance for the two states, which have a historical record together dating to 1955. Egypt was the first Arab nation to buy Soviet weapons and for the two following decades (1956-73) remained the leading purchaser of USSR-made arms in the Middle East. With the virtual wrap-up of political and military contacts in the mid-1970s, the next surge in military cooperation between Moscow and Cairo came in the late 1990s to the early 2000s. Since November 2013, the two parties have been working to expand these ties and have signed contracts worth $3.5 billion for the supply of 24 MiG-29 military jets, 12 Mi-35M attack helicopters, a K-300P Bastion-P mobile coastal missile system and firearms and ammunition. Certain analysts in Russia interpreted these moves as an ally-like support for Egypt to confront the West. Instead, the interest on both sides seems less grandiose and more pragmatic. The Egyptian leadership views Russia as both a critical replacement for American weaponry and as a guarantor of the regime's stability in the face of a potential Islamic resurgence. They both hold that the coalition strikes on the Islamic State have had little effect and insist that a resolution of the Syrian crisis is only possible via dialogue.

For its part, Russia wants to increase its regional presence and overall weight in the Arab world, and having Egypt share the Russian narrative of regional dynamics is a way forward. There is another strategic calculation for Moscow: While it balances relatively productive relations with Iran, the Palestinians and Israel, the only real Russian ally in the region is Syrian President Bashar al-Assad, whose own position may not be so secure in the long run. Therefore, having another reliable partner would be wise.

Certainly, the scale of the policy Russia aims for is far from that of the USSR. But in the current global political realm, the Kremlin sees no need for such an extensive cost-based policy. Instead, its moves are country-targeted with an emphasis on the resources — natural, political and military — it has to offer to those who need them. While the sun of demand for these resources shines, Russia will try its best to make its political hay.