Jordan's king tells Congress 'gloves are off' in fight against IS 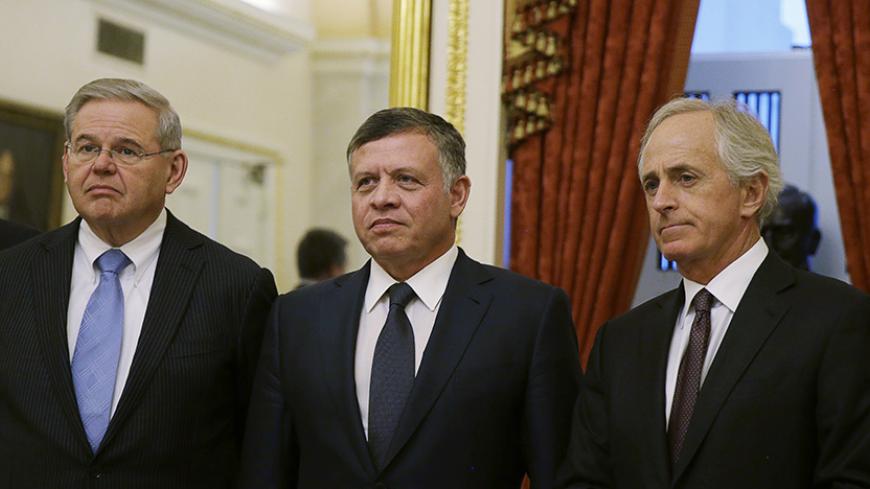 A defiant King Abdullah II told US officials on Feb. 3 that Jordan's determination to fight the Islamic State (IS) was greater than ever after the extremist group burned a Jordanian pilot alive.

Despite rumblings of discontent inside the kingdom against the US-led coalition, Abdullah met for several hours with key senators, even posing for press photos with them before heading to the White House. He told lawmakers that the widely distributed video of the brutal slaying would help bring the country together, according to members who were in the closed briefings.

"The king feels the gloves are off; you can't negotiate with these people, you're going to have to take it to them," said Sen. Lindsey Graham, R-S.C., a member of the Senate spending panel. "The Jordanian response will be more engaged, not less engaged."

Initial reports from Jordan following the release of the IS video indicated as much, with a Jordanian security official alleging that five convicted terrorists would be executed "within hours."

The Obama administration likewise vowed to strengthen ties with Jordan. Secretary of State John Kerry and Jordanian Foreign Minister Nasser Judeh signed a memorandum of understanding earlier in the day that calls for an increase in annual US aid from $660 million to $1 billion over the next three years, pending appropriations.

Key lawmakers told Al-Monitor they expect Congress to sign off on the aid increase.

"I certainly think that the brutality of what we all face, and particularly what the Jordanians face where they live, encourages us to be even more helpful," said Appropriations panel member Roy Blunt, R-Mo., who expects to travel to Jordan during the upcoming recess. "The stress of what's happened in Syria, the number of [refugees] they're trying to assist … and the long friendship that we've had, especially [since the attacks of Sept. 11, 2001], all should make our country want to be helpful to the Jordanians in every way we can."

Jordan also has key allies in the House, such as Middle East panel chairwoman Ileana Ros-Lehtinen, R-Fla., who authored legislation to boost US aid last year.

"Today’s signing of a Memorandum of Understanding was an important step in that process but I believe there is more that we can do to enhance our strategic cooperation," Ros-Lehtinen said in a statement. "The kingdom is on the frontlines in the fight against [IS] and we can still do more to expedite US military sales to Jordan and support its response to the Syrian humanitarian crisis."

Senate Foreign Relations panel Chairman Bob Corker, R-Tenn., said he intends to talk to other lawmakers about the aid request. He said Abdullah didn't ask for specific assistance, military or otherwise, but rather indicated his desire to further build up the Arab coalition battling IS.

"I think he's anxious to move these coalition discussions along among these Arab countries and understands that this has got to be an Arab-led effort," Corker said. "I think they're even more determined to deal with this. And I think you're going to see the results of that very soon."