Right after the gruesome killing of the Jordanian pilot, Jordan’s TV broadcast the Palestinian imam’s condemnation of the crime, which indicates a rapprochement between Palestinians and Jordanians. 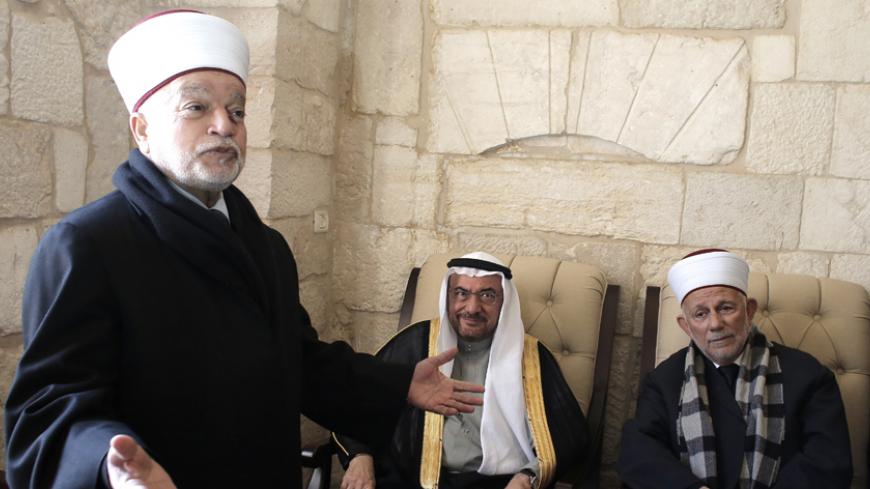 Mohammad Hussein meets with Iyad bin Amin Madani (C), secretary-general of the Organization of Islamic Cooperation, during Madani's visit to the Al-Aqsa Mosque in the Old City of Jerusalem, Jan. 5, 2015. - AHMAD GHARABLI/AFP/Getty Images

When the video of Jordanian pilot Muath al-Kaseasbeh was circulated Feb. 3, Jordan TV cut its regular broadcast to update Jordanians and provide some comfort to a grieving nation. The first interview conducted by a military official after the announcement of the news was with the Jerusalem-based Palestinian Imam of Al-Aqsa Mosque, Mohammad Hussein. Sheikh Hussein, who's also the Palestinian mufti, provided words of solace and comfort while at the same time forcefully arguing in other interviews that the act of burning alive a prisoner is an abomination to Islam.

The fact that the official Jordanian TV turned to a Palestinian religious official and the ensuing enormous support by Palestinians to Jordan illustrates the sea change that has taken place between Palestinians and Jordanians over the past decades. What once was a fatal relationship that was highlighted by a short-lived bloody Black September in 1970 between the Jordanian army and PLO guerrillas has long been forgotten and has been replaced by mutual trust and solidarity between the two neighboring populations. Jordan accused PLO fighters of trying to overcome the kingdom, while Palestinians blamed Jordan for the loss of the West Bank and inability to end the Israeli occupation of what was part of the Hashemite kingdom.

The morning after the release of the video, hundreds of Palestinians held an impromptu demonstration outside the Jordanian Embassy in Ramallah, denouncing the brutality of the Islamic State (IS). Ordinary people as well as senior officials all paid respect to the fallen Jordanian pilot. In Gaza, officials and the public at large visited the Jordanian field hospital to pay their respect and to denounce the brutality of IS militias. Impromptu solidarity events took place in Jenin, Qalqilya, Hebron and other Palestinian locations. Palestinian President Mahmoud Abbas phoned Jordanian King Abdullah, and members of the PLO executive committee, parliamentarians, ministers and other figures of the Palestinian leadership made a public visit to Jordanian officials in Ramallah.

Birzeit University lecturer Hisham Abdullah called the Palestinian-Jordanian relationship complicated because of the fact of intermarriage and geographic proximity. He told Al-Monitor that Palestinians are “afraid that if something happens to nearby Jordan, it will have a direct effect on them.”

Palestine TV General Manager Emad al-Asfar said that Palestinians “initially were not convinced” that IS was actually committing these heinous crimes, but the burning alive of the Jordanian pilot was a reality check and it “shocked many into the need to make a public expression of a feeling of disgust over this crime,” he told Al-Monitor by phone.

The similarity between the death of Kaseasbeh and the death by burning alive the Jerusalem teenager Mohammed Abu Khdeir on July 2, 2014, at the hands of Jewish extremists was not lost on Palestinians. The young Palestinian was kidnapped from outside his Shufat home — an act that was captured on security cameras. His burnt body was later found in a Jerusalem forest. This settler act followed the abduction of three young settlers near the occupied city of Hebron. Abu Khdeir’s mother sent a video message to Kaseasbeh’s mother comforting her and expressing solidarity with the Jordanians.

Palestinian anti-occupation activist and Bethlehem University professor Mazen Qumsieh took the similarity in the incidents one step further by accusing the Israeli security of being close to IS. “Most of us view IS as the Israel Security and Intelligence Services. We are skeptical of the motivation and background of those who started or run it and view those deluded youths who join IS as crazy uneducated bigots,” he told Al-Monitor by email.

The elected member of the Palestinian Legislative Council from Jerusalem, Bernar Sabella, told Al-Monitor that a symbiosislike relationship has evolved between Palestinians and Jordanians. “What affects Palestinians affects Jordanians and vice versa,” he told Al-Monitor. “The killing was so horrific it shocked anyone with a conscience. Our sympathies go to his family, tribe and to the Jordanian people.”

Rose Shomali, Palestinian educator and author of children’s books, said the Jordanian pilot's slaying received huge sympathy because of the solidarity people felt to the helpless plot as he was burnt while in a metal cage. “It reflects injustice and the victimization of the weak,” she told Al-Monitor.

The response to the brutal killing of Kaseasbeh was evident in the Gaza Strip as well. Besides the impromptu visits by thousands to the military hospital, Gazan resident Abdel Hamid Qdeih decided to organize a wake in his own home in solidarity with the Jordanians. Ismail Haniyeh, Hamas leader and former prime minister, called Kaseasbeh’s father to express his condolences and Hamas leaders visited the Jordanian hospital to publicly express solidarity. Hamas issued a statement calling his killing “a heinous crime” but didn’t refer to the slain pilot as a martyr.

Nahed Abu Teimeh, a women’s rights activist from the Gaza Strip who lives in Ramallah, argues that the outpouring of condemnation is an indirect criticism of Hamas. “We have a very bad experience with political Islam and extremism, which we have seen firsthand in Gaza. Hamas and IS have a lot in common even though Hamas is much more clever at hiding its real positions,” she told Al-Monitor from Ramallah.

Gaza-based radio director Islam al-Barbar, whose radio station for women Nisa Gaza FM was destroyed in last summer’s Gaza war, also echoed similar critical sentiments of Hamas. “Hamas has in the past supported IS even though now they are condemning this act,” Barbar told Al-Monitor.

Relations of Palestinians in the West Bank and Gaza Strip have clearly surpassed decades of mistrust that existed in the second half of the 20th century. The popular as well as official reaction to the criminal killing of the Jordanian pilot shows clearly that positive outward and mutual political solidarity has been translated to friendly neighborly relations.

Such closeness might come in handy if any future political solution of the Palestinian-Israeli conflict will require the good offices of Jordan.