In the last 18 months, seven top Israeli police commanders have been forced to resign — four under sexual misconduct charges — leaving the police force shattered and leaderless. 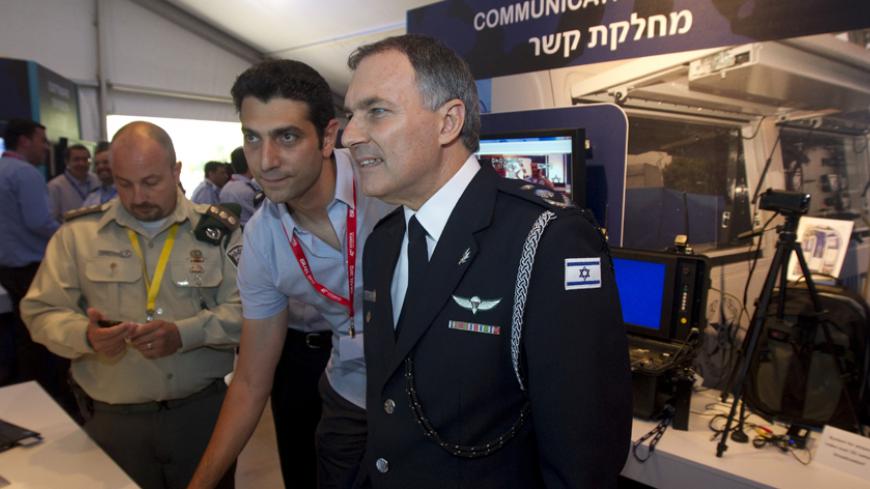 The head of the Israel Police, Maj. Gen. Yohanan Danino, attends the Interpol European Regional Conference on its opening day in Tel Aviv, May 9, 2012. - JACK GUEZ/AFP/GettyImages

The Israel Police, which never had a good public relations image and was never very popular among the public, has undergone a rare and unprecedented process of public disintegration. In the last year and a half, seven out of 16 major generals who comprise the high-ranking police command were forced to resign. (A police major general is the equivalent rank of general in the Israel Defense Forces (IDF) or in other Western armies.) Four out of seven resigned or were discharged due to suspicions of various forms of sexual harassment against subordinate female police officers.

To this list we must add another major general, Southern District Police commander Uri Bar-Lev, who was slated to be promoted to inspector general in 2011, but whose promotion was canceled at the last minute while he was under investigation for sexual misconduct. Bar-Lev ultimately was forced to resign; the charge was replaced by “unbecoming conduct.”

Such a thing had never happened before in Israel and it is doubtful that similar phenomena took place elsewhere in the Western world in the modern era. It is hard to conceive of a reality in which almost half of the General Staff of the US Army or half of the senior command of the New York Police Department would be caught for such conduct and expelled in such a short time. As of February 2015, the police top brass in Israel does not exist, does not function and the Israeli public’s view of the police has hit an all-time low. This week, when the “seventh major general” affair exploded on Feb. 4, the issue grabbed the headlines and took over the public agenda. It even put the elections and the tension in Israel’s north on the back burner. A country without a police force.

The seventh major general is under investigation. This afternoon, Feb. 5, his name was released: Maj. Gen. Hagai Dotan, commander of the Coastal District, one of the most highly-esteemed, veteran members of the organization. He has not yet resigned or been dismissed, but the assessment is that it will happen soon.

The investigation against him was opened after an anonymous letter reached the Justice Ministry’s department that investigates police officers. As a result, an investigation was opened and five policewomen who served under the major general were contacted. These women reported that Dotan had committed several types of sexual harassment, including verbal and textual messages, while exploiting his position of authority over his subordinates. A few weeks before him it was Deputy Commissioner Nissim Mor, once a contender for Israel Police commissioner, who was suspected of performing an indecent act on a policewoman, sexually harassing numerous policewomen and attempting to destroy evidence.

Israeli media are full of those licentious text messages sent by major generals to their subordinate policewomen, one of them in her fifth month of pregnancy; these are childish text messages replete with cheap language, sent by Israel’s top law enforcement officials. Indeed, a terrible disgrace.

A similar process, though at lower intensity, also took place in the IDF more than a decade ago. The nadir was reached when former Defense Minister Yitzhak Mordechai resigned from political life in 2000. Mordechai had served as general of three IDF commands, was a war hero and a politician who had a large share in toppling Prime Minister Benjamin Netanyahu from the government in 1999. Mordechai’s public trial largely contributed toward the internalization of a new reality, a reality that senior officers and uniform-wearers of all stripes in Israel found hard to swallow. The most fitting cliche to describe the trial-event is, “The bastards changed the rules and didn’t tell me.”

For decades, immediately after the establishment of the State of Israel in 1948, the women who served in the army, on the police force and in other places in Israel were given over to the authority of their male superiors not only on the hierarchical level, but the behavioral level as well. It became a kind of norm for senior officers to pinch the backsides of young female soldiers and much more beyond that. The law enforcement system did nothing about it: The law itself was not sufficiently clear and the culture of reporting and submitting complaints on the part of victims was sadly lacking. Once upon a time, women in Israel put up with the harassment, and sometimes much more than harassment, preferring not to complain.

Today, the situation has changed unrecognizably. The sexual harassment law was changed and became one of the most progressive in the world in its field. The status and position of women is constantly improving (although in the periphery of Israeli society, among the ultra-Orthodox and the Arabs, the situation of women is still bad). The number of indictments submitted for sexual harassment, sexual acts under coercion and acts of rape is very large. In the last 20 years, numerous high-level Israeli officials in various positions were dismissed, brought to trial and sometimes even sent to serve prison sentences because they did not internalize the new rules and lapsed. Another example, in addition to that of Mordechai, is Israel’s former President Moshe Katsav who was convicted of rape in 2010, discharged from his position and sentenced to seven years in prison.

This social process skipped over the police force. The Israel Police is an antiquated, out-of-date institution that froze in time and was not wise enough to clean up its act and internalize the new situation. Ironically, the institution responsible for enforcing the new law against sexual harassment, a law viewed as one of the most progressive in the world, became an isolated, unruly and recalcitrant bubble of sexual harassment itself.

The Israel Police has long since had a very bad reputation among the general public, because budget constraints do not allow the state to run a modern and sufficiently large police force. Most budgetary efforts are invested in the IDF, the Shin Bet, the Mossad and various intelligence arms, as befitting a country facing ongoing existential dangers. This list of priorities forced the government to continue to maintain a disintegrating force that is much too small to manage the growing state (only 30,000 police officers for about 8 million civilians). When we consider that almost half of the police’s major generals were forced to resign or were discharged due to various offenses, a large part of which were sexual offenses — the end result is a police force in disintegration.

“For now,” I was told by a senior police source, “the Israel Police has no high command. It is in tatters. We are talking about a strategic blow. It is a lot more than just talk about lecherous acts and sexual harassment. This is a true eclipse of morality.”

“It is a matter of culture,” a senior police officer told me this week. “It seems to me that it’s no secret that the norm was, inside this organization, that everyone knows and keeps quiet, everyone covers for everyone else. People allowed themselves to cross red lines and commit acts that they themselves were entrusted to prevent. We have to hope and pray that what’s going on now will bring about the change, better later than never.”

Another senior officer who resigned a few years ago from the police talked about an impossible situation. “It is hard to find senior officers who don’t have sexual relations with their female subordinates, who don’t keep a mistress in the police in addition to their legal wife,” he said in a private conversation. “It’s already a kind of the norm; anyone who doesn’t act this way is viewed as deviant, as an odd duck. The problem is, these people haven’t internalized what’s going on around them. Not long ago, the police conducted an investigation against a state president in office [Katsav] who was accused of exactly these same types of offenses. And yet no one there has succeeded in adding two-plus-two and saying, ‘Enough, the rules have changed; the time has come to join the new world.’”

Many members of the police find it strange that the police commissioner, Inspector-General Yohanan Danino, did not assume responsibility for the goings-on and resign. True, Danino is not under any suspicion for acts of this type and he has a clean record; but, he was the one to feel deceived and personally fired his deputy, Nissim Mor on Jan. 28, when suspicions surfaced about him. Nevertheless, when your entire apparatus is falling apart and half of the senior command you appointed was sent packing in disgrace, you need to assume responsibility.

Meanwhile, Danino prefers remaining in his post and completing his term of office, which ends in a few months. Evidently, he is leaving the rehabilitation work and the building of a new Israeli police force to his successor. The main problem at this moment is that it is not clear who that successor will be. Most of the potential candidates have already been dismissed.