Despite well-documented fatalities on roads in the Negev, successive Israeli governments have turned a blind eye, choosing instead to allocate funds to build and expand settlement infrastructure. 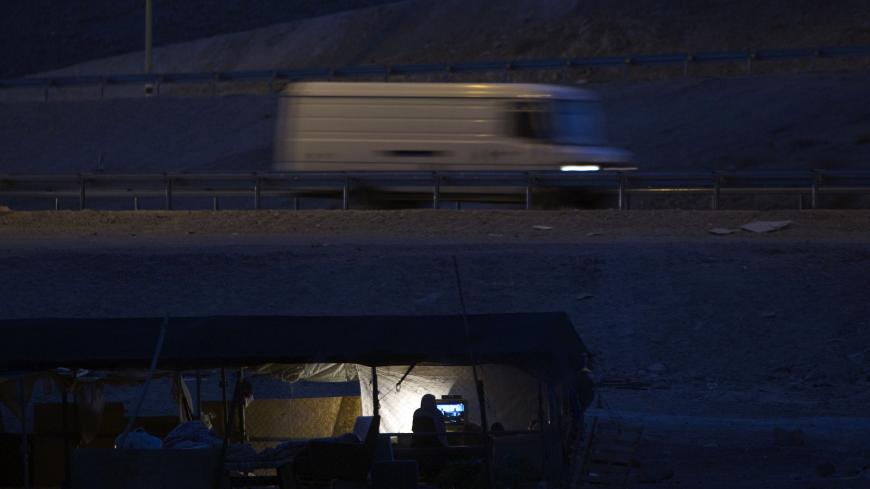 Bedouins of the Jahalin tribe watch television at their encampment, al-Khan al-Ahmar, in the Judean desert close to the road between Jericho and Jerusalem, June 16, 2012. - REUTERS/Darren Whiteside

The Feb. 3 road accident that claimed the lives of eight women from Hura, a southern Bedouin community, and left more than 30 people injured, has tragically drawn attention to a well-known fact: To wit, Israel's Bedouin population suffers from serious neglect of its infrastructure. This neglect has likely taken many lives to date.

In this recent accident, a trailer carrying a tractor ripped the side of a bus with female worshipers en route from Jerusalem. They were part of the al-Buraq Procession, organized by the Islamic Movement to bring worshipers to the Temple Mount (Haram al-Sharif) in remembrance of the Prophet Muhammad's Night Journey. The women were killed just a few kilometers from home on Route 31, aka the "Bloody Road." Hura declared a day of mourning.

Speaking to Al-Monitor, Mohammed al-Nabari, head of the Hura Council, said, "I grew up here, in Hura. Even from my childhood, I recall large numbers of fatalities. Classmates and friends I grew up with were killed on this road."

On the day when thousands of people attended the burial of the women, however, Nabari felt uncomfortable linking the disaster that had befallen the community to infrastructural neglect. "I do not want to take advantage of this tragic event and tie it to the neglect of the Bedouin communities," he said. "Not that I am denying that there is neglect, but the road accident occurred on a state highway and not inside my community."

Not everyone agrees with the approach taken by the council head. "The neglect on the roads has claimed the lives of hundreds of people from the Bedouin community. It is unacceptable that we are being ignored, whereas in other places everything is being done to improve the roadways. If Jews had been killed, this whole matter would have been treated differently,” said Omar Abu Shakra, whose mother, Hadra, was killed in the accident.

Ahmad Abu Shakhita, whose mother, Na’ama, was also killed in the accident, told the Israeli news site Ynet, "For years we’ve been calling these roads the ‘death roads.’ If the situation doesn’t change, the next accident is just a tragedy waiting to happen."

According to Or Yarok (Green Light), a nongovernmental organization dedicated to preventing road accidents in Israel, on average nine people are killed every year and some 200 are injured on Route 31, where the worshipers were killed, and on its offshoot road, Route 60, which goes by Hura.

The "death roads," along a 50-kilometer (31-mile) stretch from the southern city of Arad to the large Bedouin town of Rahat, are called "red roads” by the authorities because of the number of fatal traffic accidents that have taken place there. The road on which the women from Hura were traveling has been considered "red" for dozens of years, but has never raised a red flag with decision-makers in the Israeli government and never led to a change in national priorities.

Labor Party Knesset member Shelly Yachimovich, who arrived in Hura shortly after the accident, posted an obituary on her Facebook page for the eight women killed: "Road accidents are a real danger lurking on the roads. They don’t have to happen. Certainly not this one, which happened because of red tape and years of neglect in refurbishing this deadly road, which is located in an area that the state has not deemed important enough, near Hura."

About three years ago, I shot a TV documentary about the neglect of the communities in this region compared to another, manicured region — the settlements in the West Bank. The Jewish residents of Arad and the nearby Bedouin communities of Kuseife, Hura and Lakiya had waited for dozens of years to see improvements made to a busy road along which tens of thousands of vehicles traveled narrow lanes day and night. It was only recently that work to pave an alternative route was begun.

During the same period, wide roads were built in the West Bank. The Peace Now movement, which tracks the scope of construction and massive infrastructure investments in the settlements, labeled these thoroughfares "luxury roads," carved into the mountains and hills at a cost of hundreds of millions of shekels. These luxury roads connect communities whose populations are hundreds of times smaller than the number of residents on the periphery in the south and north of Israel and certainly compared to the communities along Route 31. For example, bypass roads — so-called because they bypass Arab towns in the West Bank — were paved between the settlements of Talmon A, Talmon B and Dolev all the way to Bet El. These are wide, brightly-lit four-lane roads.

In the Ariel settlement region, Route 5 connects the city to Israel’s coastal plane. Sections of this road are continually being upgraded. Recently, it was expanded to four lanes, even though the road is not considered heavily congested and does not justify such enormous infrastructure costs, especially when roads in Israel in areas insufficiently important to Israeli decision-makers desperately need upgrading and there has been clamoring for years for budgets to improve infrastructure.

A detailed report published by Peace Now eight years ago, in 2007, warned of the large investments being made by the state in settlement infrastructure. One of the examples cited was the Za'atara bypass road (dubbed the Liberman Road, after Avigdor Liberman, at the time serving as minister of infrastructure). It served four settlements that had 483 vehicles and 2,570 residents. Israel’s National Roads Company, formerly called Ma’atz, estimated the construction cost at 142.5 million shekels (approximately $36 million). The four-lane project included three bridges.

Another example is the Shim’a-Meitar road, between the Meitar roadblock and the settlements in the south Mount Hebron area that was expanded to serve eight settlements (home to roughly 10,000 residents) at a cost of NIS 80 million (approximately $20 million). The Shim’a-Meitar road is only 3 kilometers (2 miles) from the deadly road where the worshipers from Hura were killed and produces hundreds of casualties each year.

Even those who question the credibility of the Peace Now reports and surveys, or incidentally the reports of other movements and NGOs that monitor construction and infrastructure investments, cannot deny what any traveler on West Bank roads can clearly see — namely, that Israel’s priorities are warped.

There are many reasons for this. It is not only the result of a desire to establish facts on the ground, but also the work of the massive lobby representing the settlers in almost every Israeli government in recent years. In the West Bank, the roads are deluxe, whereas the roads on the periphery, especially where minorities live, remain death roads. Recently, as noted, the construction of a new road from Arad to Rahat, has begun. Years of discrimination and neglect will be atoned for, thus putting an end to the rampant spate of blood that was spilled. Once the belated project is completed, however, it is unlikely that Israel’s priorities will establish egalitarian benchmarks.