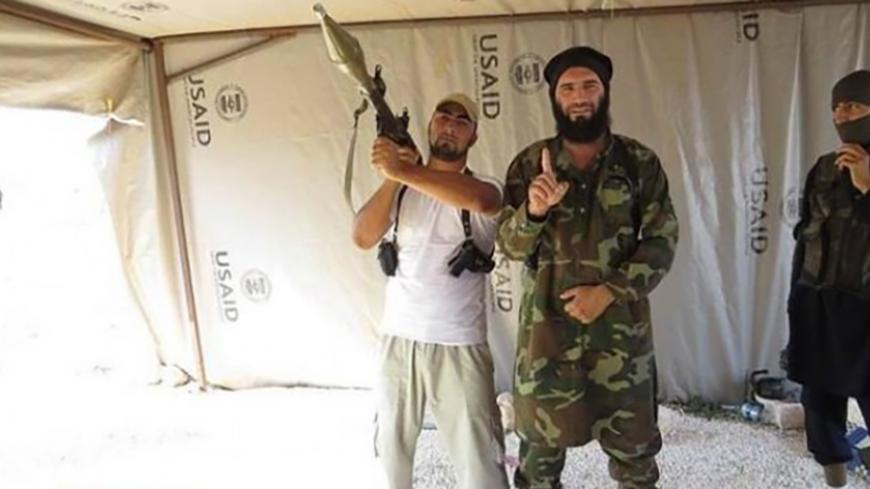 Muhajireen Kavkaz wa Sham, a commander in the group now known as the Islamic State, is shown in a USAID tent in this photo from September 2013. - Twitter

Outraged lawmakers are demanding that the Barack Obama administration review its humanitarian effort in Syria following reports that Islamic State (IS) militants have been distributing UN aid packages as their own.

Four House members wrote to the US Government Accountability Office earlier this week to ask that the government auditor examine the mechanisms in place to limit waste and diversion. The request comes after jihadist websites displayed images of militants handing out what appear to be World Food Program packages crudely covered with the IS logo.

“In the increasingly challenging and dangerous environment posed by the Syrian civil war, we are concerned that assistance funds intended for Syria may not be reaching intended recipients,” the lawmakers wrote in a letter to Comptroller Gen. Gene Dodaro obtained by Al-Monitor. “Given these concerns, we request that your office review U.S. humanitarian assistance efforts undertaken in response to the Syrian crisis.”

The letter was signed by Reps. Ileana Ros-Lehtinen, R-Fla., and Ted Deutch, D-Fla., respectively the chairwoman and the top Democrat of the Middle East panel, as well as by panel members Reps. Gerald Connolly, D-Va., and Ron DeSantis, R-Fla.

“I worry that some of the assistance that we provide that goes to the UN and its implementing partners might get diverted to [IS] or other terrorist groups, or the [Bashar al-] Assad regime, by force or through bribes in order to gain access to certain areas,” Ros-Lehtinen said at a hearing on Syria Feb. 12. “While I understand there are some very real and dangerous obstacles in place to reaching the maximum amount of people, Americans are concerned over where this [US aid is] going.”

The images could cause the United States and other donors to balk at providing aid for victims of a conflict that the State Department has labeled the “worst human-made catastrophe of our time.” The United States has been the top donor since the Syrian crisis began in 2011, with $3 billion provided to the region to date and President Obama requesting another $735 million in his fiscal year 2016 budget request.

“I offer my full support for continued humanitarian funding for this crisis, but I also want to make sure that our aid is effective, and not falling into the wrong hands,” Deutch said at the hearing. “I was troubled by reports last week that showed [IS] fighters handing UN food packages.”

The images have shined a spotlight on the difficult trade-offs aid agencies have to make as they seek to help an estimated 12.2 million Syrians in need of humanitarian assistance. The World Food Program’s emergency regional coordinator, Muhannad Hadi, condemned the “manipulation of desperately needed food aid inside Syria” in a statement last week, but many aid agencies refuse to talk about an all-too-common occurrence they know could harm their fundraising.

“What goes on in the field is not transparent … but if we just recognize a lot of aid is being misappropriated, then maybe aid agencies will be more likely to share data," Yale University economist Nancy Qian told Reuters. “Sometimes aid workers are forced to give food to fighters to be able to work in an area, sometimes armed groups expropriate and sell it, and sometimes armed factions take the aid directly to the intended recipients."

Concerns that US humanitarian aid could fall into the wrong hands have been around at least since September 2013, when images purporting to show IS-linked commander, Muhajireen Kavkaz wa Sham, inside a US Agency for International Development (USAID) tent circulated widely on the Internet.

The Obama administration has struggled with the joint goals of defeating IS while helping its victims. The Treasury Department’s point man on sanctions, David Cohen, last year ruled out “shutting down” banking activity in IS-controlled territory while others advocated for more of a scorched earth approach.

“Violence continues to hinder the delivery of assistance, including in regime-held, opposition-held and [IS]-held areas,” USAID acting assistant administrator Thomas Staal testified at the Feb. 12 hearing. “An estimated 4.8 million Syrians in need reside in UN-identified hard-to-reach areas, including 2.7 million residing in areas under [IS] control.”

Staal said that at least 150 workers with the UN, the Red Crescent and nongovernmental organizations have been killed in the Syrian conflict. But he said he had a “good news story” to tell about US efforts to track its assistance.

“It’s always important that our aid gets to the right people, and we realize the challenges in this crisis so we’ve actually upped the ante and increased our systems for overseeing that,” Staal said.

Staal said USAID has begun requiring weekly reports from its partners on the ground, where they are asked to identify any issues affecting their ability to deliver aid to its intended recipients. He said US partners have great experience in conflict zones and use smart phones to send in photos of the bar codes on aid packages so USAID can track where and when aid was delivered.