The public declaration by US envoy to the UN Samantha Powers of an upcoming Quartet meeting might suggest a shift by the United States to reinvigorate the dormant international group. 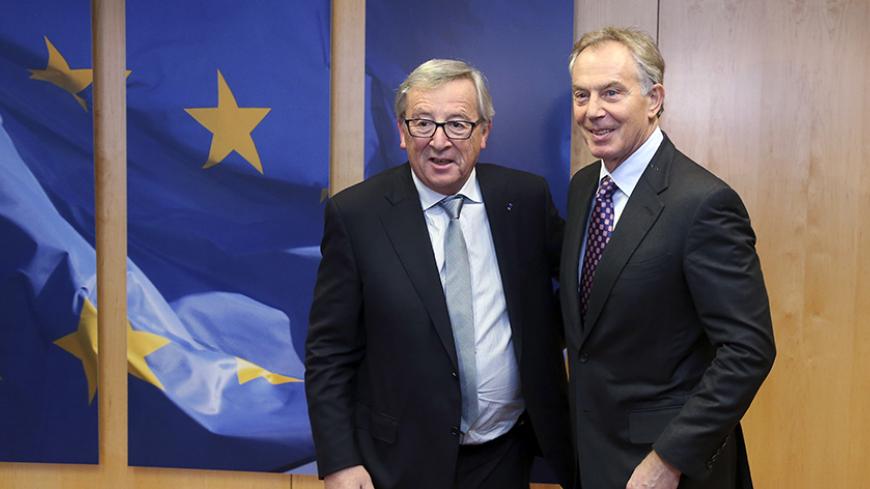 The statement was made Jan. 15 by US ambassador to the UN Samantha Power in New York. The setting was the UN Security Council’s monthly debate on the Middle East, the scene of a failed attempt to set an end date to the Israeli occupation of Palestine. The justification, as expressed by Power, was to “urge both parties to exercise maximum restraint and avoid steps that threaten to push Israeli-Palestinian relations into a cycle of further escalation."

Powers’ declaration revealed that representatives of the long dormant international Quartet were to meet in Brussels on Jan. 26. The Quartet was established in Washington in 2002 and is made up of the United States, the European Union, Russia and the United Nations. It has been in hibernation ever since the beginning of the US-sponsored direct peace talks in July 2013.

A look at the website of the Quartet’s representative, Tony Blair, shows that the last statement by the four major world parties was made Sept. 27, 2013, and contained a briefing by the United States on the direct talks. Since that date, the Quartet has been silent, except for protocol issues and resolving some problems around the movement of people and goods, especially the Gaza Strip.

Furthermore, the last entry on the site of the Quartet representative was made Dec. 10, 2014, and contained a statement by Blair on the death of Palestinian Minister Ziad Abu Ein during a nonviolent anti-settlement protest near Ramallah.

Karen Kaufman, the media and communications adviser to Tony Blair, tried to downplay the importance of the meeting. In an email response to Al-Monitor, Kaufman said that the meeting was merely at the envoy level. “Next week's meeting in Brussels is actually of the Quartet envoys. The envoy meetings are held quite regularly.”

As for the UN, Serry said that he hopes that the ”Quartet will be able to live up to its responsibilities and contribute to efforts de-escalating the present, tense situation and preserve prospects for a two-state solution.”

In June 2011, Blair’s office celebrated that the Quartet was becoming a permanent fixture in Palestinian-Israeli politics. The Quartet’s representative, who had been living in the luxurious American Colony Hotel, had moved to a fancy seven-story newly established building in East Jerusalem’s Sheikh Jarrah neighborhood.

So what happened to the international Quartet? Why did its creator allow it to experience this slowdown, and is it now being revitalized for a particular reason or is this business as usual?

Despite the attempts to downplay the upcoming meeting, that Power made a public statement suggests a possible shift by the United States to reinvigorate the Quartet.

Ghassan Khatib, spokesman of the previous Salam Fayyad administration, told Al-Monitor that these US actions and policies might have more to do with the United States’ attempts to mend relations with its allies across the Atlantic. The former spokesman believes that the US effort to revive the Quartet is a sort of admission that they cannot carry the burden of the conflict alone. “The US move might be aimed at encouraging Russia, the EU and the UN again to be more involved in trying to resolve the conflict.”

Khatib, who is vice president of Birzeit University in the occupied West Bank, does not believe that the US efforts include any direct or indirect message to Israel: “In the run-up to their elections, the Israelis are not in any mood to accept any messages from outside,” he said.

Khaled Dawoud, an Egyptian Middle East analyst experienced with the UN, believes that the US decision is connected to the issue of Palestinian statehood.

Dawoud, former UN bureau chief of the semi-official Egyptian newspaper Al-Ahram and who is assistant editor-in-chief of Al-Ahram Weekly, believes that the United States is sending a signal that peace talks will be revived once again. “The US is trying to send a message that they could help revive peace talks, but this time they will not revive it alone but with the help of the international community,” Dawoud told Al-Monitor.

Currently, all Quartet members are busy with the Middle East. The UN is firmly in support of the Palestinian efforts in joining the International Criminal Court, European countries are all moving toward recognition of Palestine, and Russia, soon to hold talks on Syria, has been recognized as a major player in this region.

If indeed the US move is recognition that the days in which Washington monopolized the Palestinian-Israeli conflict are over and that they are willing to be part of a worldwide team effort to help resolve the conflict, then the move announced by Power will be welcomed.

However, if the US effort is simply aimed at buying time and derailing the Palestinian march to statehood, then the shift toward the Quartet will surely face opposition from the Palestinians.

The Barack Obama administration might have given life to a dormant coalition that had failed to produce any concrete results except for some humble humanitarian achievements in the Gaza Strip. The lights might be on this month in the new Quartet building in East Jerusalem, but without a serious initiative, the sheer presence of the Quartet and its high-profile representative will become the butt of a new round of jokes about its ineptitude.