Terrorist operations carried out by radical Islamic groups around the world and in the Middle East have had the unintended effect of promoting moderate Islam, particularly in Iran. 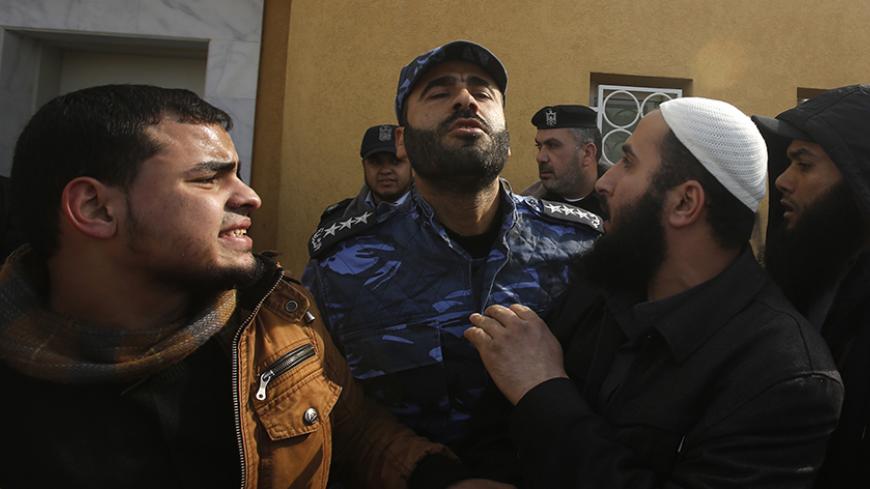 A Palestinian police officer loyal to Hamas pushes Salafists back during a protest against the French satirical newspaper Charlie Hebdo's cartoons of the Prophet Muhammad outside the French Cultural Center in Gaza City, Jan. 19, 2015. - REUTERS/Suhaib Salem

The militant activities of the Islamic State (IS) and its counterparts have contributed to the rise of moderate Islam in the Islamic world. The fact is that it is Muslims, of all sects, who have suffered the most at the hands of these groups. A 2012 US National Counterterrorism Center report revealed: “In cases where the religious affiliation of terrorism casualties could be determined, Muslims suffered between 82 and 97% of terrorism-related fatalities over the past five years.” The violence has created among Muslims a general feeling of solidarity with the non-Muslim minorities in the Middle East and Westerners who fell prey to these groups.

The recent killing of a number of journalists at the Charlie Hebdo newspaper offices in Paris is no exception. Through their target selection, extremists were betting on the attack winning them wider social support from Muslims, as the target was a sensitive and controversial subject among Muslims. Despite the many Islamic objections to the Charlie Hebdo caricatures of Prophet Muhammad, the result was the opposite: The Muslim world largely responded by denouncing the terrorist act, not the cartoons.

Egypt's Al-Azhar fully condemned the terrorist incident, while Iraqi clerics and authorities criticized the attack and Shiite cleric Sayyed Hussein al-Sadr condemned the behavior of militant groups that made the Prophet Muhammad appear as a “butcher.”

Tehran’s substitute Friday prayer leader Ahmad Khatami condemned the attack, saying, “We fully condemn this terrorist act and announce that Islam does not allow the killing of innocent people.” This position is a radical change in the policies of the Islamic Republic of Iran, whose founder’s fatwa calling for the death of novelist Salman Rushdie had set a precedent for fatwas against those insulting Islamic sanctities.

The Iraqi Foreign Ministry issued a statement fully denouncing the terrorist act and asserting, “Iraq stands at the forefront of countries supporting France and all the states affected by terrorism.” Popular demonstrations in the streets of Baghdad have made many Iraqis' position on the murders clear.

This outpouring of sentiment has concerned militant groups in the Muslim world as they incur heavy losses in their social bases. In efforts to control the damage, they have arranged protests and condemned the positions of moderate religious institutions for forsaking Islamic principles and sanctities.

A pro-IS group organized protests in Gaza City against the Islamic silence toward Charlie Hebdo's crime of mocking the prophet. The demonstrations led to clashes with the Hamas-affiliated police and the arrest of some demonstrators. The Salafist movement supporting the demonstration said that Hamas’ acts go against the principle of loyalty to the prophet of Islam.

In Iran, the hard-line Ansar Hezbollah group gave its blessing to the killing of Charlie Hebdo's staff and deemed the attack a victory for the prophet of Islam. In an article published in its newspaper, Yalasarat, the group pointed out that earlier operations against Rushdie carried out by members loyal to Iran were similar to the Charlie Hebdo murders. The most prominent of these was the young Hezbollah-affiliated Lebanese Mustafa Mazeh, who attempted to kill Rushdie in August 1989. The operation failed and led to the death of the young man himself. It is worth mentioning that some hard-line Iranian institutions still commemorate Mazeh's attempt on their official websites.

Remarkably, however, the official ​Iranian discourse has completely shifted away from calling for violence in cases of "abuse" of Muslim sanctities. Iran has not issued any death fatwas ever since calling for the killing of Rushdie in February 1989. Fatwas in general have not been emphasized in the past few years, marking a change in approach and a separation from militant groups and countries in the region. Militant groups in Iran have apparently started to understand this and deem it a kind of retreat from the principle of revolutionary Islam in Iran and an inclination toward a secular approach.

The presence of a strong moderate movement in the Islamic world with attitudes very different from that of militant Islam has become increasingly apparent. The radical currents have waned in different regions of the Islamic world after their initial expansion during the Arab Spring events and the accompanying instability in the Middle East.

This opportunity calls for wise positions and smart moves on the part of Western countries, as any tension or shock in the Muslim world risks promoting the militants, offering them fertile ground in their communities and weakening moderate Islam.

The experiences of the past decades have shown that what some describe as the intrinsic hostility between the Western and Islamic civilizations can be managed and is not inevitable.