The Indian-British author whose novel provoked the ire of the late Ayatollah Khomeini was stabbed by an apparent Iranian government sympathizer in New York. 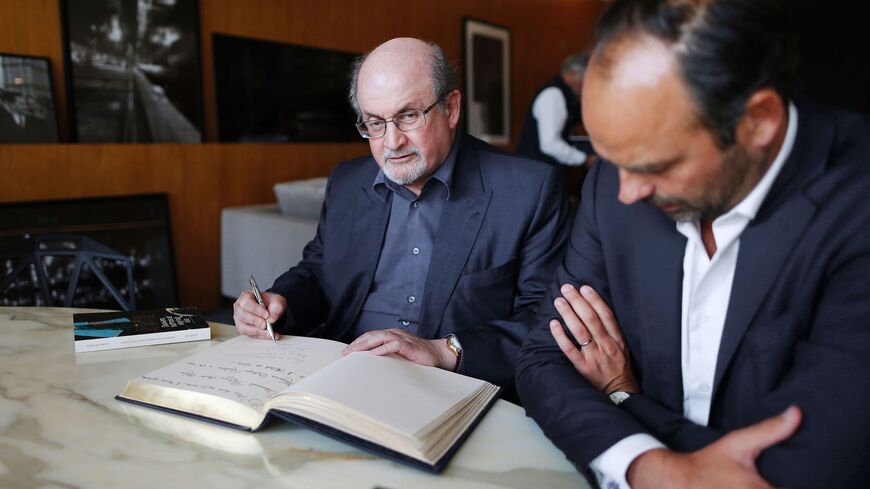 Writer Salman Rushdie (L) signs a logbook for the city hall of Le Havre next to Mayor Edouard Philippe on Sept. 13, 2016, in Le Havre, France. - CHARLY TRIBALLEAU/AFP via Getty Images

The Iranian government has addressed the recent stabbing of author Salman Rushdie. Foreign Ministry spokesperson Nasser Kanaani vaguely denied Iran’s involvement in the attack on the author, but also seemed to justify it.

“We don’t consider anyone deserving reproach, blame or even condemnation, except for [Rushdie] himself and his supporters,” said Kanaani today, as reported by The Associated Press. “In this regard, no one can blame the Islamic Republic of Iran. We believe that the insults made and the support he received was an insult against followers of all religions,” he added.

Who is Rushdie? Salman Rushdie is a famed novelist. He spent his childhood in India before immigrating to the United Kingdom, where he was educated. He holds British and also American citizenship, having moved to the United States several years ago. Rushdie comes from a Muslim family but has long identified as an atheist.

Rushdie is best known for his acclaimed 1988 novel "The Satanic Verses," which was inspired by the life of the Prophet Muhammad. The book references pagan gods that were worshipped in Mecca at the time of the advent of Islam and also mocks some Islamic beliefs. The main character is named Mahound, a pejorative term for the prophet from the Middle Ages.

The Satanic verses prompted a lengthy international debate on freedom of expression and criticism of religion. Some Muslims found the book offensive and it set off protests across the Islamic world. Some people in the West criticized Rushdie over the matter. Rushdie apologized for the “distress” the book caused to Muslims in 1989.

What happened: On Aug. 12, Rushdie was about to give a talk in New York state when he was stabbed on stage. Rushdie was severely injured and rushed to a hospital. He has since been taken off a ventilator and his health is improving.

Hadi Matar, from the US state of New Jersey, was arrested in relation to the incident. He pled not guilty to attempted murder charges, according to Reuters.

The Iranian government has long had it out for Rushdie. In 1989, the late supreme leader of Iran, the Ayatollah Khomeini, issued a fatwa calling for Rushdie to be murdered. Some Muslims criticized Khomeini’s fatwa at the time for lacking validity in Islamic law.

Later that year, a Lebanese citizen named Mustafa Mazeh attempted to kill Rushdie in a bomb attack. Mazeh died while priming the explosive. Rushdie lived under the constant protection of British security forces for 12 years as a result of Khomeini’s edict. However, he moved to New York in the early 2000s and has been living without security since 2002.

A Twitter account under the name of Hadi Matar with the handle @hmatar286 was suspended as of today. Al-Monitor obtained screenshots of the  account showing retweets of posts praising Khomeini, Hezbollah leader Hassan Nasrallah and late IRGC commander Qasem Suleimani.

A prosecutor said yesterday that Matar’s alleged attack on Rushdie was “preplanned," though authorities have yet to declare a motive. Hadi Matar is also a fairly common name.

Matar's lawyer did not immediately respond to Al-Monitor's request for comment.

Matar’s family is from southern Lebanon and immigrated to the United States before he was born. A Hezbollah official told Reuters Aug. 13 that the organization was unfamiliar with the attack and had no comment.

The Hezbollah-affiliated news outlet Al-Manar reported the attack against Rushdie, but did not mention the group’s position on the matter. The report did mention the 1989 attempt on Rushdie’s life, describing how Mazeh was “martyred” trying to carry out Khomeini’s fatwa.

Know more: Rushdie's stabbing is the latest in a series of attacks allegedly involving the Iranian government. Last year, a New York court charged four Iranian citizens with attempting to kidnap Iranian-American activist Masih Alinejad. The women’s rights activist and Voice of America presenter is a strong critic of the Iranian government.

Last week, the US Department of Justice charged an IRGC member with plotting to murder former US national security adviser John Bolton. The former Trump and Bush administration official is known for his hawkish views on Iran and has even advocated bombing the country over its alleged pursuit of a nuclear weapon.