There were no signs of New Year's Eve celebrations in Aleppo’s rebel-held areas, as locals expressed their desire for the war to end. 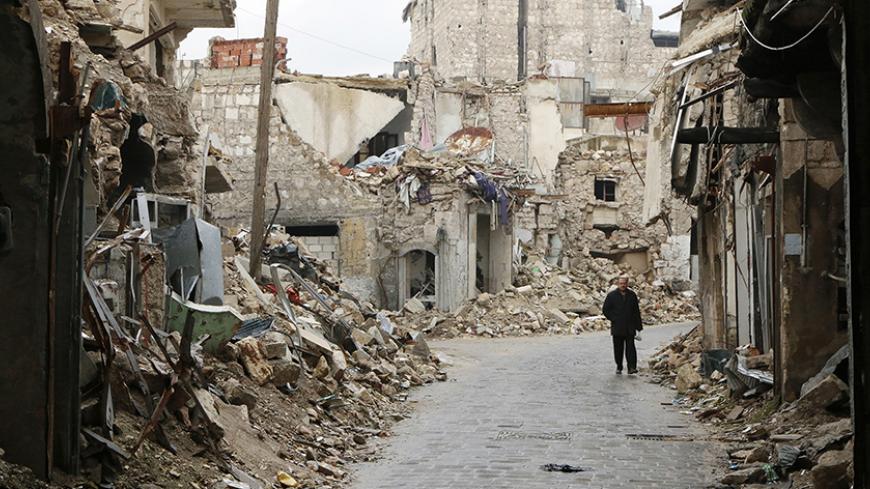 A man walks through a damaged street in Old Aleppo, Jan. 4, 2015. - REUTERS/Hosam Katan

ALEPPO, Syria — Syrians awaiting the new year shared their concerns regarding the country’s fate and hope for a silver lining. They wished for the bloodshed, which has been going on since the start of protests demanding change in March 2011, to end.

In front of a patisserie in the Bustan al-Qasr neighborhood, some locals gathered to buy cakes to celebrate the new year. While Yahya Azou was waiting for his order, he told Al-Monitor about his past year. “It was the year of homelessness par excellence. I spent most of the time far from my family and visited them every couple of months after they were displaced to Turkey. I preferred to stay in Aleppo and volunteer in the educational field,” he said, adding: “The family house has turned into a shelter for friends. Tonight, we will celebrate the new year. I honestly don't know what got into me to organize this celebration, but I think it’s a nice occasion to rejoice and enjoy ourselves.”

As he received his order, Azou smiled. “I wish my mom would come back. I'm sick of fast food.”

Before leaving the patisserie, he said: “I hope the war will end and the displaced will return to their homes. I miss my university. I hope to come back to resume my studies without being pursued by the security apparatus.”

The other customers talked about the country’s future, as they watched a news bulletin recapping 2014.

Abdel Qader Najjar said: “Rational people should interfere to end the war. Our country has turned into a battlefield for international powers and warlords are controlling us.”

Amid talk about a dialogue between the opposition and the regime, under Moscow’s auspices and amid the endeavors of the UN envoy to Syria Staffan de Mistura to “freeze the fighting” in some areas of the country, Najjar expressed optimism: “The solution can only be political. It has become evident that a military settlement is impossible. I hope that the negotiations will come to fruition and that this heinous war will end.”

More than 76,000 people have died in Syria in the last year, including 33,000 civilians, according to the statistics of the Syrian Observatory for Human Rights.

“What have these victims done to deserve such a fate? My son disappeared last year in Al-Maydan region, and we know nothing about him,” Najjar said. "Was he killed? Is he alive? I just want to know what happened to him.”

In the evening, there were no signs of New Year's Eve celebrations in the rebel-held areas of Aleppo. The streets were pitch dark due to the power cut, except for some stores that had generators. There were hardly any passersby, and every now and then one could hear the sound of tanks in the city. In Salaheddine district, dozens of civil activists gathered to celebrate the New Year.

They lit candles in the shape of “2015” around the photos of their peers who were killed during the war. Photographer Houssam Qatan told Al-Monitor: “I'm not very optimistic about the new year. The Syrian situation is becoming more complicated and the world seems apathetic to the catastrophes befalling Syria.”

He added, “My wishes for 2015 are the same as those for 2013 and 2014. I hope the killing will stop and the detainees will be freed. I hope our country will become safe and justice and freedom will prevail. But, in fact, there are no signs of an imminent solution or positive vibes."

Qatan’s voice was silenced by the sound of explosions at midnight. Those weren’t fireworks, but shells coming from the front lines. It seemed that the militants were celebrating the new year in their own way.

Qatan sarcastically said, “Can you hear the sounds? It seems the new year is off to a peaceful start!”