A project to produce mouneh, the traditional processing of vegetables, fruits, flowers and herbs into jarred preserves, is bringing Lebanese women together with Syrian and Iraqi refugees. 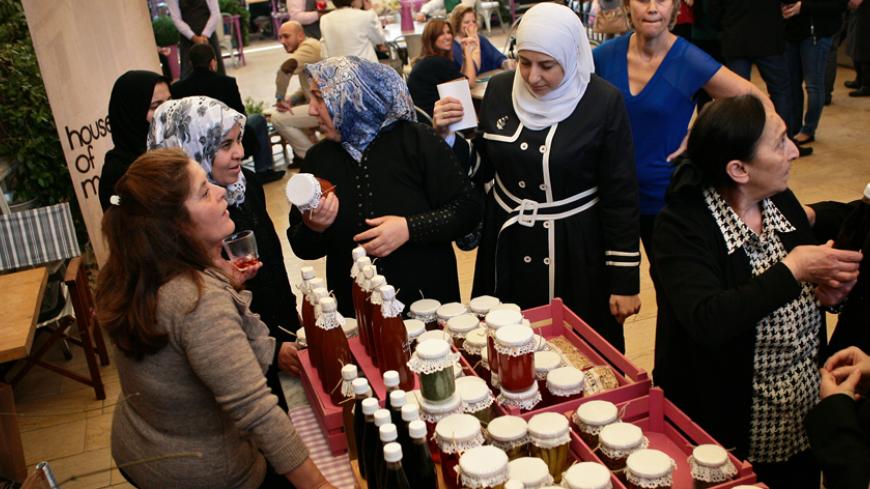 Women of the House of Mouneh sell their preserves at the opening of the project at the Zahr el-Laymoun restaurant in Dbayeh, Lebanon, in this undated photo. - Melissa Tabeek

It is a common belief that food brings people together. Inside a traditional Lebanese two-story stone house in Falougha, a village in the north of Lebanon, there is a kitchen that is usually filled with women pickling fruits and vegetables. At a glance, they could be mistaken for an extended family preparing jars of food together for winter storage. It is only when you speak to them that you realize they are from different countries and cities from Raqqa to Mosul.

This diverse kitchen, called the House of Mouneh, is a project created by the civil campaign Lebanese for Refugees and funded by the US Embassy that aims to build bridges between the people of Lebanon and refugees in the country. "Mouneh," from the Arabic for “to store,” is the tradition of preserving vegetables, fruits, flowers, herbs and more in jars. Proving true the adage that change begins at home, this group of Lebanese, Iraqi and Syrian women who started as strangers brought together to turn the tradition of making mouneh into a livelihood now consider themselves family.

Lebanese for Refugees founder Carol Malouf, who has seen tensions rise between Lebanese citizens and refugees over the year she has been doing her aid work, was looking for a way to bring together host communities and the displaced. “I thought the best way to do it was to create joint projects for sustainable development to empower women so that you help the local economy, buy from the farmers, … employ half Lebanese, half refugees. Sociologically, it creates a bond between the people, and when the women go home, they talk about the other women in a positive sense. You are changing the conversation in the local society.”

The House of Mouneh officially began in November at the Zahr el-Laymoun restaurant, to coincide with Lebanese for Refugees’ one-year anniversary. There, Malouf showcased the civil initiative's work since its founding, including a campaign to provide medicine, blankets, food and other essentials to refugee families in the northern border town of Arsal. The initiative constructed a refugee camp in Wadi Hmeid, on the outskirts of Arsal, and created a social awareness campaign, #WeAreNotInvisible, which strives to bring attention to the displaced in Lebanon.

While Lebanese for Refugees’ work in Arsal is currently on hold, the House of Mouneh is taking off after a successful opening during the holiday season. The 11 women, all living in Falougha, come in every day during “mouneh season” to turn seasonal produce into jams, pickled vegetables, oils or juices. As they prepare for the busy beginning of March, they're focusing on creations such as essence of mandarin or pumpkin "kibbeh" made for private catering or sale in Beirut supermarkets.

Though so far they have relied on Lebanese recipes, this will change next year. Come March, a small store will open next to the kitchen selling a diverse range of products that will bring the homelands of the displaced women working alongside the Lebanese into the project.

Each woman has different story of how she ended up at the House of Mouneh and how the opportunity is impacting her life.

Dunia Hajj likes to keep the project's kitchen impeccably clean. She prides herself on the fact that the workers wear hats and gloves and use filtered water to prepare the food. This is not just any mouneh, but mouneh made with love and pride, and even on the busiest days, Hajj says work passes quickly. They move as units in their separate groups, laughing, talking and, of course, pickling.

“Time passes quickly. We tell stories; we share everything together,” she says. Hajj used to own a bakery in Beirut, but after the rent became too high, she had to move back to Falougha. Here, she has learned much from the other women — not least, how to make pickles the Iraqi way: with more spices and garlic.

Fatima Hamdou, from Aleppo, has been in Lebanon for one year. Her husband is dead and she is now the provider for her two children, 7 and 9 years old. At a table in Zahr-al-Laymoun at the project’s launching, she said, “Now I can offer my kids small things, which is better than nothing. I’m raising my children with this money.”

Afrah Zouher, bundled up in a bright red coat on a cold morning in the House of Mouneh, says was forced to flee Mosul four months ago, when the Islamic State pushed into the city. Zouher, a teacher for 20 years, left everything behind except her husband and four children, and came to Falougha in search of a future. She found out about the House of Mouneh from supervisor Ryad Ramy, who attends her church. She says, “We felt there was no hope and no future in Iraq. We came to Lebanon as refugees. I needed any work, and we are a big family. I wanted to take care of my family.”

The youngest of the group, Amani Hatoum, is a part-timer, but whenever she has a day off from the university, she comes with her mother Samar to help. Sitting among the other women, she says, “I believe every girl should know how to make mouneh. I like to come every day I can. We feel like a family here.”

Aside from financial stability and camaraderie, particularly for the women who fled war in their cities, the kitchen provides a nonsectarian, neutral area to escape pressure and sadness. Shams Sheikh, from Raqqa, has been in Lebanon for about a year. She says working at the kitchen gives her an all-around lift — physically, financially and mentally. Sheikh says quietly, “Because of wars, we are in a depression and it changes our mood. There are more people — a different culture — and it’s a great experience to know Lebanese more.”

Ramy says that this year, the House of Mouneh will expand its products not just in terms of countries, but also varieties of mouneh, since they are starting from the beginning of the season for the first time. “The women are excited every day,” Ramy says, adding, “They can’t wait to do whatever is next.”

No matter what happens, Hajj believes this project will not end with Iraqi pickles. “It is innate behavior to have tolerance. … If you put people together like this, if you can bring them together, you can avoid the clashes.”