In an interview with Al-Monitor, Talal al-Krenawi, mayor of the Bedouin town Rahat, accuses the Israeli police of using unnecessary force in riots that erupted over the past two days instead of trying to calm the situation. 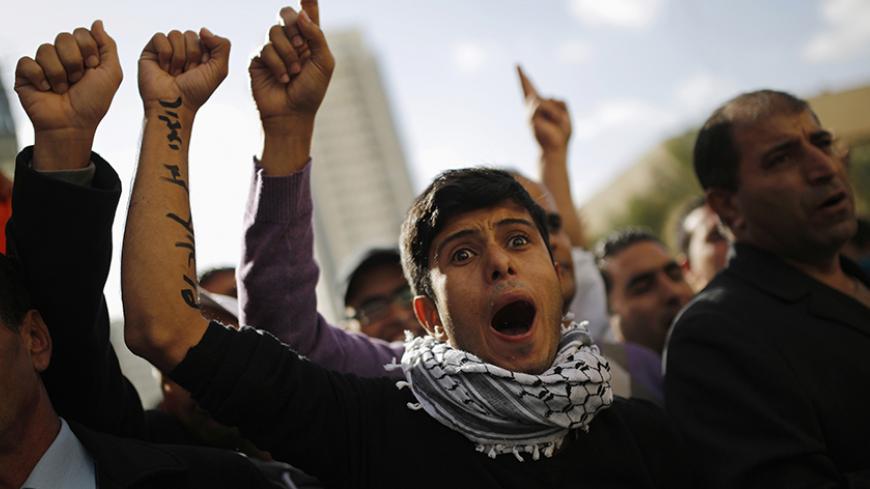 Members of the Bedouin community gesture during a Dec. 5, 2013, protest outside a court in the southern city of Beersheba, calling to release people who were arrested in protests against a government plan to force 40,000 Bedouins living in the southern Negev region to leave their villages. - REUTERS/Amir Cohen

The photos taken by Rahat residents on their mobile phones amid the violent clashes that took place in the Bedouin town during the funeral procession of the young Sami al-Jaar on Jan. 19 were very disturbing. On the one hand, hundreds of angry young people were seen attacking police cars as they rushed into town, while on the other hand, police from the Southern District were documented firing tear gas and rubber bullets at a crowd of protesters. After each salvo, masses of protesters were seen scurrying to find shelter. Some demonstrators appeared to fall down and disappear into thick smoke while others were being taken to triage points. The photographs I obtained are tangible, scary and troubling evidence of the great schism between Israel's Bedouins and the establishment, as well as of the intensity of the Bedouin rage.

It all began the week of Jan. 14, following a police raid on drug dealers in Rahat. The arrest of two Rahat residents in Neighborhood 26 went awry. Residents threw stones at police, and in circumstances still under investigation by the Police Internal Investigations Department, al-Jaar was killed by a firearm. A mass riot took place the following day during Jaar’s funeral. In an interview with Al-Monitor, Rahat Mayor Talal al-Krenawi, who was also injured by tear gas at the funeral, says that another person died from a heart attack after inhaling tear gas, adding that hundreds of the town’s residents were injured by rubber bullets and tear gas. According to the mayor, more than 300 people were injured. Soroka Hospital told Al-Monitor that it received 22 injured people for treatment.

"I took a tear gas canister straight in the chest. My clothes caught fire and started to burn," he said. "Luckily, there were some young people around me who put out the fire. I fell down and hurt myself. Right now I’m still suffering from pneumonia. Let me tell you, they don’t act like that even in the territories. When someone is killed in the territories and the military shows up, it butts out. It doesn’t go near. For a moment I felt I was in Jabalia, as if I were in a refugee camp in Gaza."

Al-Monitor:  So in essence you saw the chain of events from up close. Could these events not have been averted?

Krenawi:  Yes, I was there. We, the municipality of Rahat, tried to organize the funeral. We took it upon ourselves to plan the route of the funeral procession and handle internal and external traffic. We had coordinated with the Israel police to block the main road during the funeral and not to send forces into town because of the heightened tension and sensitivity. And that’s what the police actually did. We started the funeral that was attended by some 20,000 people. Everything went smoothly. We marched in the procession and no slogans against the state were made nor calls for death or revenge. In the final stages of the burial, as verses from the Quran were being read, an armored police GMC suddenly zoomed by, literally driving amid the crowd. Some young people threw stones at it. Within a few minutes the police emerged from a nearby forest and other places where we could not see them. They started shelling all those in the cemetery with tear gas, rubber bullets, live ammunition and smoke grenades. Thousands began to flee, hundreds were injured. One person was killed and 27 were left wounded.

Al-Monitor:  Are you saying hundreds?

Al-Monitor:  You are mentioning one fatality and some 300 people wounded. Do you mean injured from gas inhalation? How do you define wounded?

Krenawi:  Wounded by gunfire, rubber bullets. Many were injured by tear gas. The funeral was attended by many older people, children, youths and the middle-aged generation. Most of the older people were injured; they passed out. Some of them have asthma. They were struggling to breathe with all that tear gas. It’s not just that your eyes start to tear, it gets into your lungs. When it comes to older people, people with asthma and heart diseases, this could be traumatic and deadly. The man we have just buried had a heart condition. He died from gas inhalation. Many were injured and taken to clinics. Some of the people who were injured by gunfire and rubber bullets are still in hospital.

Al-Monitor:  Assuming that the police vehicle drove through despite the agreements, why pelt it with stones? Do you agree that the reaction of the people in Rahat was unreasonable?

Krenawi:  Yes, I agree. These young people could have held back their reaction. But you need to understand — the situation was so volatile. From the standpoint of those young people, that was police provocation. Why did the vehicle drive through? What’s the point of getting into a situation where you test [the nerves of] these young adults? Maybe there were 10 or 20 people who were overly excited. Why show these people that they are nothing? What's the point? And how is it possible for a police car to break through a roadblock? Some young people tell me that it was probably premeditated. Probably someone from the top echelons sent it to deliberately provoke us; to exacerbate the relationship between us; to show that the Bedouin are extremists and that they throw stones. It could be. I do not know.

Al-Monitor:  Do you suspect that it was done deliberately?

Krenawi:   I don’t know, people tell me that. I also have a hunch that it was something premeditated, but I’d like to believe that that’s not the case. I won’t shut up until a judicial fact-finding commission is established. Let me tell you — if such a commission isn’t established, then the young people are right. Right now, I don’t support their position that everything was deliberate and that it was a police provocation. But unless a commission is established to investigate the chain of events — from start to finish — this would indicate that they have something to hide. It would go to show that someone wants to humiliate this population that is not treated like citizens of the state but more like residents of Jabalia, and that the finger on the trigger is very light.

Al-Monitor:  Have you spoken with the police district commander?

Krenawi:  I haven’t spoken with anyone. I spoke with president [Reuven Rivlin] who called me and said: "I support you. We need to restore the good relations and look into what happened." He will visit Rahat. Minister of Internal Security Yitzhak Aharonvitch called several times. In the end I responded and also expressed my opinion and what I thought. Police and command officers called me up but I did not speak to them.

Al-Monitor:  Are you saying that Minister Aharonovitch called a couple of times and you didn’t want to talk to him?

Krenawi:  I wasn’t available to take his calls.

Al-Monitor:  The High Follow-Up Committee for Arab Citizens of Israel decided to stage a general strike to protest the events in Rahat. Do you think that such a strike can change anything?

Krenawi:  I would like to hope that this will cause someone to react somehow. The very fact that the Arab sector goes on strike should prompt the state to do some soul-searching. It should look into the relationship with the Bedouins and also with the Arabs, but mainly with the Bedouin community that is in a very difficult situation. Otherwise we’re headed toward a catastrophe.

In response to a request from Al-Monitor, the spokesperson for the police of the Southern District provided the following statement:

The police vehicle in question was in no way whatsoever part of the police deployment during the funeral and its occupants were on their way home. It did enter road 264 but at no point, however, did it break through a police roadblock. When the driver realized he was driving on a road where a funeral was taking place, he tried to turn around but was blocked by dozens of vehicles that prevented him from leaving. The vehicle was attacked by an angry mob of hundreds of people who hurled stones, rocks, metal bars and anything they could get their hands on. The police officers felt they were going to be lynched. Owing to the fact that these were skilled fighters adept at dealing with extreme scenarios, a major disaster that could have resulted in fatalities was averted. Despite the life-threatening situation in which the police officers found themselves, they did not open fire at the rioters, and the fact remains that no one was wounded from live fire during the funeral. In addition, the forces from the Negev region, which arrived within minutes, rescued the police officers by using riot-control measures, while rocks were being thrown at them as well. The video footage taken by the police helicopter documenting the [attemped] lynching of the police officers speaks volumes, proving again that what we have here is a bunch of flagrant lies and unfounded allegations.

However, in light of the fact that the said police vehicle was not supposed to be on that road during that point in time, the commander of the Southern District, Maj.-Gen. Yoram Halevy, appointed a fact-finding commission to investigate the conduct of the police officers at the roadblock and those in the vehicle. The ostensible agreement to prevent police vehicles from entering the funeral does in no way justify this kind of brutal violence and a rampage against the police officers. This was a goodwill agreement and not a capitulation to outlaws. We have a list of all the people involved in the attempt to lynch the officers and we will arrest them at our own convenience.