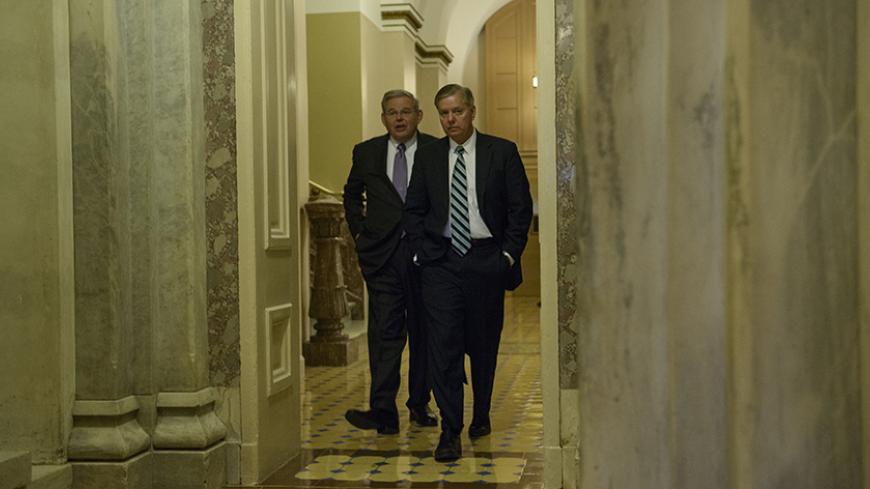 The Senate Banking Committee is scheduled to vote Jan. 22 on a watered-down Iran sanctions bill.

The bipartisan legislation requires a nuclear deal by this summer but doesn’t mandate what it must look like, greatly improving its chances of getting a veto-proof majority.

The new bill from Sens. Robert Menendez, D-N.J., and Mark Kirk, R-Ill., does away with a series of controversial requirements that critics had initially highlighted as the gravest threat to negotiations. Instead, the new version gradually ramps up sanctions if no deal is reached by July 6, while giving President Barack Obama the ability to waive them indefinitely as long as he certifies that continuing the talks is “likely to result in achieving a long-term comprehensive solution with Iran.”

Advocates of the negotiations acknowledge they face a tough fight getting lawmakers to back off.

“Certainly many of the concerns [from the bill’s critics] have been listened to in the kinds of negotiations that happened around drafting this legislation. And in that sense that’s good to see,” said Kate Gould, the Middle East lobbyist for the Quaker lobby Friends Committee on National Legislation. “But of course the fundamental problem that this could derail the negotiations is still very much our concern. And we’re very much concerned about it reaching a veto-proof majority.”

The new bill has put the White House on the defensive as sanctions proponents seek to get enough Democrats on board to get to the magic number of 67 that would override Obama’s veto. The president vowed Jan. 16 to use that power, even as reporters pressed him to explain why he opposes sanctions that would only kick in if talks fail.

The pro-Israel lobby American Israel Public Affairs Committee (AIPAC) counters that the bill “clearly complies” with US negotiators’ commitment not to impose new sanctions while the talks are ongoing. Menendez reportedly clashed with Obama over the issue at a Democratic Party retreat on Jan. 15, according to The New York Times.

“The Nuclear Weapon Free Iran Act of 2015 … strengthens American diplomatic efforts with Iran,” AIPAC said in a memo to members. “It puts in place sanctions that will go into effect if — and only if — Iran and the P5+1 do not reach an agreement.”

The new bill does away with a series of controversial measures that the Center for Arms Control & Non-Proliferation had highlighted as the main “faults” of the Menendez-Kirk bill in a widely touted analysis shortly after it was first introduced in December 2013. These include requirements that a final deal “dismantle Iran’s illicit nuclear infrastructure” and that the president certify that Iran and its proxies have not engaged in any acts of terrorism against US targets or conducted any long-range ballistic missile tests.

Center board member Richard Klass made clear in a Roll Call op-ed this week that he still opposes the bill, even in a new iteration.

“Now is not the time for new sanctions,” wrote the retired Air Force colonel. “Congress should hold off in order to give the White House, and diplomacy, more space to complete a final nuclear deal with Iran.”

An earlier draft of the legislation obtained by the Quaker lobby, presumably leaked by sanctions foes on Capitol Hill, offers fascinating insights into the legislative sausage-making process aimed at getting more Democrats to sign on.

This includes the recent removal of controversial language calling on the United States to support Israel in case it felt “compelled” to take “military action in legitimate self-defense against a nuclear threat from Iran.” The bill was also recently changed so that it now calls on a final deal to “reverse” rather than “dismantle” Iran’s “illicit nuclear infrastructure” and to “permit on-site and short-notice inspection” rather than the more onerous “continuous, around-the-clock” monitoring of Iranian facilities.

Those goals are included in a nonbinding “sense of Congress,” which carries far less weight than the requirements for a final deal that were in the original legislation. The new bill goes on to spell out a timeline for new sanctions, as follows:

Congressional sources say the new bill is greatly watered down from the original and represents the least disruptive bill that’s likely to pass the Republican-controlled Congress.

The Quaker lobby says specific elements of the bill — particularly language that prevents Obama from waiving sanctions until Congress has had “30 days of continuous session” to review a deal — dangerously hamstrings negotiators. More generally, however, they and others argue that any sanctions bill — regardless of content — could doom the talks.

“Proponents of additional sanctions at this time claim that these measures will not go into effect until negotiations breakdown and that the possibility of additional sanctions pressure will keep Iran at the negotiating table,” the Arms Control Association said in a statement Jan. 15. “However, passing new sanctions while talks are ongoing risks shattering the carefully built international coalition pressuring Iran to remain at the negotiating table.”