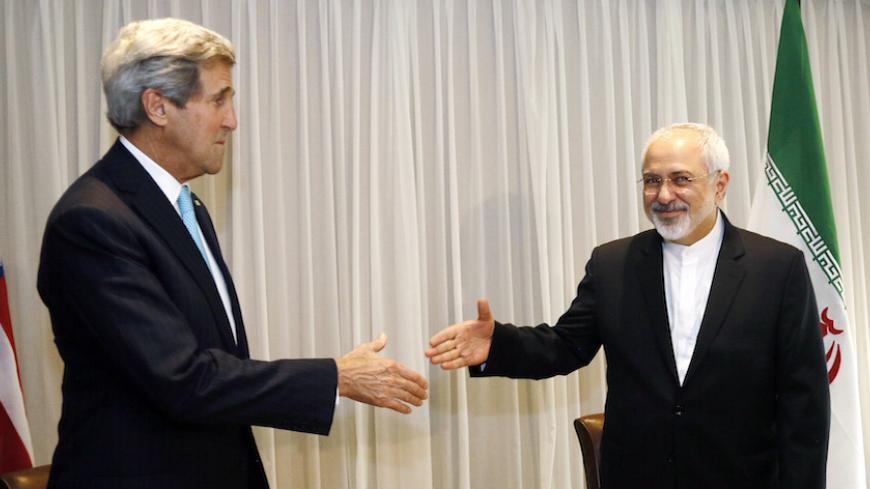 US Secretary of State John Kerry shakes hands with Iranian Foreign Minister Mohammad Javad Zarif before a meeting in Geneva, Jan. 14, 2015. Zarif said on Jan. 14 that his meeting with Kerry was important to see if progress could be made in narrowing differences on his country's disputed nuclear program. -

GENEVA — Diplomats from Iran and the six world powers (the five permanent members of the UN Security Council plus Germany, or P5+1), did not make as much progress in accelerating nuclear deal talks here this week as they had hoped, but “We are moving in the right direction,” a senior Iranian diplomat said Jan. 18.

“[We held] serious, business-like, good discussions today,” Iranian Deputy Foreign Minister Abbas Araghchi said at the conclusion of talks Jan. 18 between Iran and the P5+1. “We are still trying to bridge gaps between the two sides.”

The parties agreed to meet in early February, but said the exact dates and venue have not yet been set.

“We are moving in the right direction, but it is too early to say [if the talks will succeed],” Iran Deputy Foreign Minister Majid Ravanchi told Al-Monitor as he was leaving the meeting Jan. 18.

"The mood was very good, but I don't think we made a lot of progress," French political director Nicolas de Riviere told journalists as he left the meeting.

But time is short, Wang also said. “And I do think the parties … want to see the pace of negotiations picked up and results achieved.”

Al-Monitor reported Jan. 17 that US and Iranian negotiators had worked intensively the past week to try to draft a joint document to speed up the nuclear deal talks, but were still facing difficulties and not able to present it to the other members of the P5+1 at the Jan. 18 meeting.

The document the United States and Iran have been working to draft is called the Principles of Agreement, diplomatic sources said, and is evidently an element of the framework agreement for a comprehensive nuclear deal that Iran and the P5+1 seek to complete by March 24.

“There is good justification to be worried because time is running out,” Ali Vaez, senior Iran analyst at the International Crisis Group, told Al-Monitor Jan. 18.

“They are making progress by inches, when at this point, they need to make progress by yards,” Vaez said. “I think both sides understand March 24 is a hard deadline.”

Both US Secretary of State John Kerry and Iranian Foreign Minister Mohammad Javad Zarif, who met twice this past week in Geneva and Paris, earlier expressed the hope that this round of US-Iran consultations would help accelerate a final deal. Both sides see mounting domestic political pressures closing the space for prolonged negotiations, and have expressed increasing urgency at the need to reach a deal within the new deadline.

​President Obama has vowed to veto any new Iran sanctions legislation if it comes to his desk, saying it is a violation of the interim Iran nuclear deal and could cause the world to blame the United States if Iran talks fail to reach an agreement. He is expected to reissue his veto threat when he delivers the State of the Union address Jan. 20.