Palestinian officials, both in the Gaza Strip and the West Bank, are obstructing the union of couples who are separated by the Palestinian division. 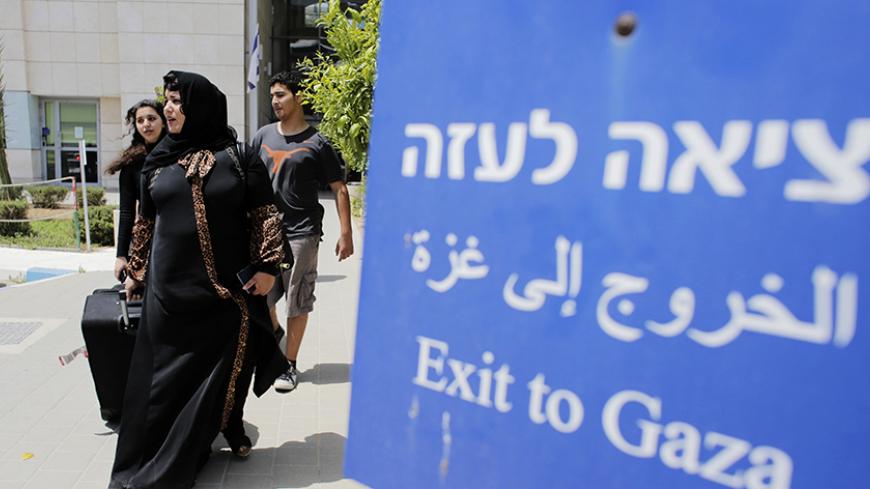 KHAN YUNIS, Gaza Strip — Her hair is already starting to turn gray as she nears her 33rd birthday. Sorrow fills Dalia Sharab's eyes. She has been waiting in the Gaza Strip for over three years to see and marry her fiance Rashed al-Fadda, 35, who lives in the West Bank city of Nablus.

When they first met in 2011 at a youth conference in Jordan, Rashed and Dalia never suspected they would have to suffer like this and wait years to see each other again. They fell in love and Rashed asked her relatives in Jordan for her hand in marriage. Her family in Gaza discussed the proposal and announced their consent after a few months, and the couple were officially engaged on Jan. 24, 2012, in the presence of Rashed and his father, who were both visiting Gaza for the first time. They only stayed for four days, and following the engagement Dalia has been trying to see her fiance in Nablus. She submitted in February 2012 a form to the Civil Affairs Ministry, which in turn submitted it to the Israeli authorities. She then filed another request in 2013, and others after that. In total, she has filed five requests to the ministry in Gaza. The replies were always the same: She was either told that she is too young or that the reasons for her travel request are not convincing.

According to human rights organizations, Israel prohibits Palestinians from the occupied territories from entering the State of Israel without a special form. Since 2000, Israel has been withholding entry permits to its territories, issuing them only to exceptional applicants such as medical patients, traders, personnel of international organizations, foreigners and VIPs using the Erez crossing.

Al-Monitor met with Dalia on Jan. 25 in her office at an online marketing company in Gaza City. She said, “When we first met, everything was nice and easy. I went to the West Bank, he came with his father to Gaza, we spent beautiful days together and we never thought that the hardest part was yet to come.”

Dalia wiped away her tears and told Al-Monitor that she fears one day she will get desperate and they will have to let go of their commitment, to give each other the chance to move on with their lives. She said, “Years have passed as we wait to meet again. Our hair is turning gray and we are changing with time. Maybe someday we will give up and leave each other.”

The story of Rashed and Dalia is just one of hundreds of similar tales that have emerged since the separation of the West Bank from the Gaza Strip in 2005, when the Israeli forces withdrew from Gaza.

The couple talks over Skype, Viber and Facebook and whatever other technology allows them to be closer to each other. But nothing compares to getting married and living under the same roof, in the house that Rashed bought on a mountain in Nablus.

He told Al-Monitor over the phone, “We have tried everything. We have gone to institutions, officials, lawyers and rights activists but it was all in vain. I don’t know what we are going to do now, but I will not lose hope and I will be patient, even though some people have advised me to break the engagement off after all these years because it might be unjust to her as well.”

The bride’s wedding gown is waiting for her at their house in Nablus. The bedroom and the kitchen are ready and all the appliances are in place. All that is left is for Dalia to brighten up the house, Rashed said, explaining how he has been ready to get married for three years now.

Dalia said, “This is why I’m still hopeful and patient and my will is strong. I majored in physics, despite the opposition of my surroundings. I worked in a different field and I succeeded. I will not give up on Rashed; it’s just another challenge in life.”

The couple reached a moment of desperation following a minor fight, during which they pushed each other to do as much as they possibly could.

Dalia is expecting Rashed to do everything in his power to fight for them. She said, “I felt that we are both expecting the other to solve the problem. We accused each other of neglect. This is when Rashed tried to meet with President [Mahmoud] Abbas.”

The fight started when security guards in the government building in Ramallah turned Rashed away and did not allow him to meet with Abbas, as he did not have an appointment.

Dalia was angry that Rashed had not waited to meet the president, the way she had done when she went to the Gaza offices of Fatah deputies in May and July 2014 and again in January 2015. In an effort to reach ministers and decision-makers, she tried to talk with three members of the Fatah Central Committee to seek their help. But she did not succeed.

Then, a friend of the couple, activist Maysa al-Shaer, encouraged them to make a bold move and start an online campaign called, “Dear president, take the bride to her groom.”

The campaign opened Jan. 1 and received much attention from the public and the media, with 36,000 people visiting the Facebook page. However, according to Dalia, the government and officials did not welcome the initiative.

Al-Monitor visited Dalia’s home in Khan Yunis in the southern Gaza Strip. During the 45-minute ride to her house, Dalia explained the details of her story and how officials kept avoiding her and obstructing the union between her and her fiance. She said, “We do not have connections and we do not know anyone who can help us with the permits, especially among the officials who have relations with Israelis.”

She added, “We thought the roads would open after the last war and that the occupation would give entry permits more readily. But it was the exact opposite; things became stricter and I'm starting to experience an unprecedented feeling of depression."

We reached her small house in the center of Khan Yunis, where her father, Mousa Sharab, who insisted on educating most of his children outside of Gaza, said, “My daughter’s story is only a part of what we, as Palestinians, suffer under the occupation and siege. Only God knows the separation we have to endure.”

He said that he believes the officials who refused to help his daughter have cold hearts and deaf ears, adding, “But we are not losing hope. Losing hope means losing life.”

Dalia’s mother, Umm Mustapha, seemed strong. However, as soon as she began talking about her daughter, tears filled her eyes. “I want my daughter to be less anxious and I want her to stop worrying. We all feel her sadness and I only want to see her get settled in her husband’s home, even if it means she won't be beside me anymore,” she said.

Perhaps it is the helplessness of the ordinary people, or the bad luck of lovers, but it seems the Palestinians' destiny is to be apart. Dalia and Rashed are indeed facing obstacles in their story, but hasn’t true love always proved that it is full of surprises?