The appearance of President Mahmoud Abbas alongside world leaders at the France unity rally will help his campaign for Palestinian independence. 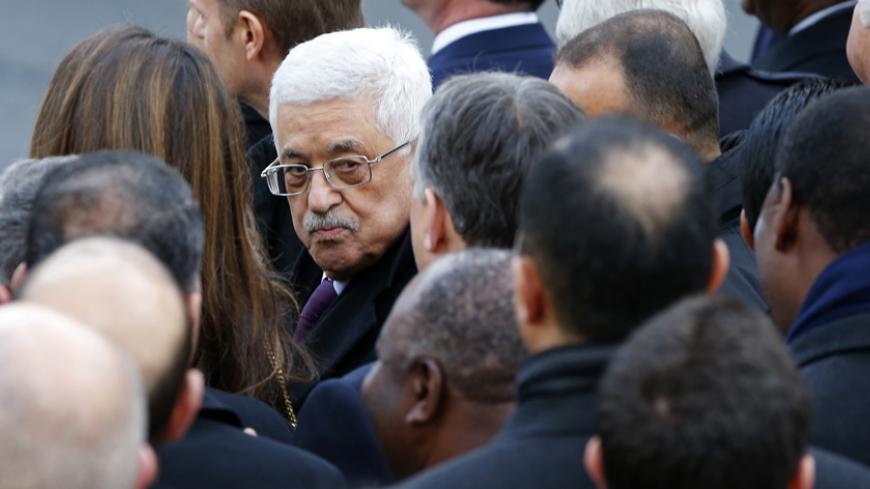 The participation of Palestinian President Mahmoud Abbas in France's mega unity demonstration in Paris on Jan. 11 was apparently not of his own making.

A day earlier, the Secretariat of the Palestine Liberation Organization (PLO) had announced plans to hold a rally in support of France in Manara Square in Ramallah at noon the following day. The Israeli press has since made it clear that Abbas’ participation in Paris came about to counter the presence of Israeli Prime Minister Benjamin Netanyahu, who insisted on attending despite opposition from Paris. Netanyahu, who initially indicated he would not be going, citing security reasons, quickly reversed his decision after his electoral opponents Avigdor Liberman and Naftali Bennett decided to attend. The French are said to have told the Israeli leader that if he came, they would invite the Palestinian president.

Much of this background was unknown to most Palestinians, who were divided upon seeing their president march in Paris alongside world leaders, including Netanyahu. Opposition to Abbas’ Paris visit arose initially from hard-line Hamas leader Mahmoud Zahar, who called it “hypocrisy and political acrobatics.”

Social media was full of posts from individuals comparing Abbas’ Paris trip to his “non-visit” to Gaza since the end of the 2014 Israeli war, which resulted in the deaths of more than 2,000 Palestinians, including 17 journalists. This sentiment was echoed by Fadi Elsalameen, adjunct senior fellow at the American Security Project and a Palestinian activist in the United States. Speaking to Al-Monitor, Elsalameen echoed many in stating, “I wish he [Abbas] showed the same support for his people locally. He banned solidarity demonstrations with Gaza and has no shame in showing up in Paris.”

Ali Abunimah, another US-based Palestinian activist, used his popular social media account to criticize the Palestinian leader for his record against freedom of expression in Palestine. “Free Speech Champion Maréchal Mahmoud Abbas Pétain routinely arrests Palestinians for criticizing him [on] Facebook.” Abunimah cited the absence from Gaza of another participant in Paris, King Abdullah of Jordan. “Jordan's King & Queen went to Paris, but not Gaza. This must mean Jordan thinks what happened in Paris is far worse than bloodbath in Gaza.”

Abunimah and others reserved the bulk of their attacks for the Israeli prime minister, who was said to have gate-crashed the Paris rally and before attending had tried to exploit the tragedy to increase French Jewish immigration to Israel.

With the exception of some social media posts, many Palestinians in the occupied territories did not appear to be unhappy with Abbas’ participation in Paris. The solidarity with France rally in Ramallah was well attended, albeit mostly by PLO officials. The various Palestinian political factions were mostly quiet about Abbas’ participation, as support for the murdered cartoonists was highlighted by fellow Palestinian and Arab cartoonists. A small rally was also held in Gaza outside the French Cultural Center.

Abbas' participation in the front row in Paris along with world leaders has given Palestinians a political boost. The marked absence of a senior US official at the rally has also made the presence of the Palestinian leader with world and European leaders significant.

Images of Abbas with Germany’s Chancellor Angela Merkel and France’s President Francois Hollande give Palestine the kind of legitimacy that it needs during its coming efforts to attain independence. It will be much more difficult to delegitimize Palestine when it sues the Israelis in the International Court of Justice after having its leader appear among world leaders and in support of a major Western power.

Abbas' participation in the Paris rally was made possible by a direct invitation from Hollande. It is clear that Palestinians have a long-term and special relationship with the French. As recently as last month, France was the only Western permanent member of the UN Security Council to vote in favor of setting a deadline for ending the Israeli occupation and in favor of Palestinian statehood. Traditionally, Arabs have regularly found in Paris a sympathetic ear to Palestinian aspirations, and the presence of Abbas in France falls clearly within the general Arab warmth toward the French.