Russia has recently increased its diplomatic efforts in the Middle East on a variety of fronts, ranging from Arab-Israeli peace to trade with Lebanon and military cooperation with Sudan. 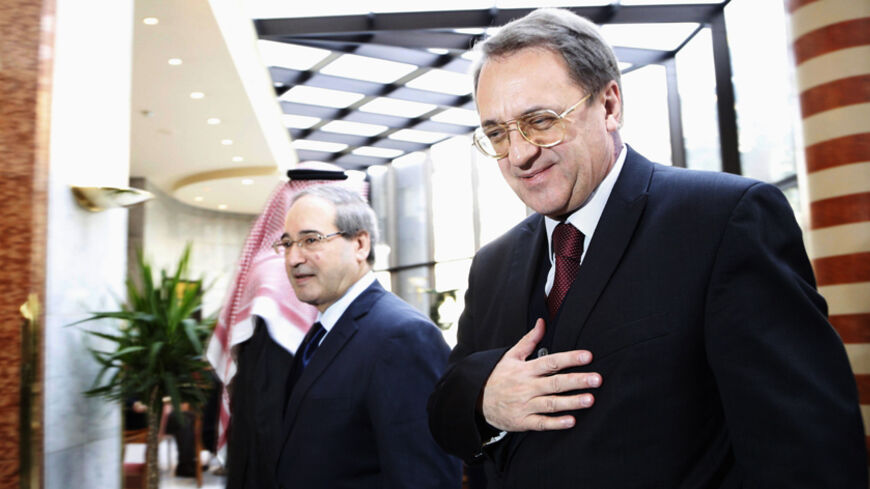 Late November and early December saw continuing intensification of Russian diplomacy in the Middle East, with some elements speaking to the systemic nature of the effort.

Leading off were movements toward an Arab-Israeli settlement. On Dec. 3, at a Russian-Arab cooperation forum in Khartoum, the Russian representatives pressed the issue to move toward a greater degree of consensus with the Arab participants, despite ongoing differences on the Syria issue. According to Russian Foreign Minister Sergey Lavrov, both sides focused on the “need to break the deadlock in efforts to achieve a Palestinian-Israeli settlement,” so “the Palestinian people can realize their national aspirations and live in their own state in peace and security.”

Lavrov called Russian criticism of the Quartet — the European Union, Russia, the United Nations and the United States — justified, as it had “long remained inactive.” He reiterated Moscow's proposal that essentially boils down to “Arabization of the Quartet.” Lavrov stated, “We want this forum, too, to become more active, but not in its old format. We want it to involve the Arab League as a full-fledged participant, since the Arab Peace Initiative opens the way to a sustainable and lasting settlement. I hope that our Western partners will hear these proposals.” Moscow has gone on record saying that it would not object to having a Middle East settlement put on the UN Security Council's agenda.

In this regard, it should be noted that just a day before the French parliament voted on Dec. 2 to call on the national government to recognize the state of Palestine, President Francois Hollande told France 24, RFI and television networks that he planned to organize an international conference on a Palestinian-Israeli settlement. According to media reports, the French initiative assumes that a final settlement could be negotiated within two years. Moscow will hardly be pleased, however, if the French intention is to delegate the negotiating process to the auspices of just one mediator — the United States. How would it fit into a statement Hollande made in a televised interview, saying that in this matter, “France should take the initiative in the search for a diplomatic solution”? True, the French president has made an attempt to play first fiddle in the relationship between the European Union and Russia, for instance making a surprise Dec. 6 visit to Moscow, where he and President Vladimir Putin talked about the Middle East, among other things, and the Russian president said that his country was supportive of “Ukraine’s territorial integrity,” Crimea excluded.

The overwhelming majority of Russians approve of Moscow's stance on an Arab-Israeli settlement, but there is no unanimity. Thus, Yevgeni Satanovsky, an indefatigable critic of Russia's policy, particularly of the Foreign Ministry, wrote the following Oct. 27 about the Palestinians in Moskovskiy Komsomolets: “Nobody has yet explained who the heck needs them and what Russia stands to gain from that 'handless bag' called 'the Palestinian state' that was foisted on Russia back in the day and that the Foreign Ministry has been dutifully dragging around ever since.”

While in Sudan, Russian diplomats had a series of exchanges seeking to strengthen cooperation between Moscow and Khartoum. The Foreign Ministry’s reports on Deputy Foreign Minister Mikhail Bogdanov's discussions with Sudanese government ministers said the talks emphasized regional issues focused on “inter-Sudan relations and the situation in Darfur.” Does this mean Moscow is looking to mediate a solution to Sudan’s internal problems or was the discussion just policy dialogue? Regardless, such dialogue itself is indicative of a certain level of confidence between the parties.

The representatives also touched on investment, energy and military technical cooperation. Lavrov, following Dec. 3 negotiations with his Sudanese counterpart, Ali Karti, announced, “We have a project and a plan to develop military cooperation in a way that will not disturb the balance of power in the region.” He added that the measures would be consistent with international rules and obligations.

Another important area of recent Russian diplomatic activity has been Bogdanov’s involvement in Lebanon. He noted an upswing in bilateral relations — although it remains unclear what exactly that "upswing" consists of — but confined recent remarks to the prospect of “increased Lebanese exports, particularly of agricultural products, to Russia.” This prospect is quite realistic given Russia’s sanctions against the European Union and several other countries, unless it gets tangled up in bureaucratic red tape. Additional light was shed on the content of Russian-Lebanese negotiations and the expectations of the Lebanese by Foreign Minister Gebran Bassil, who stated, “Russian companies will have an important role to play in the development of offshore oil and gas.” It looks, however, like serious steps have yet to be taken in that direction.

In turn, Bogdanov said that Moscow was prepared to support its Lebanese partners in countering terrorist groups. The threat of Islamic extremism and international terrorism remains a priority for Moscow. Nationals of Russia, including Chechen jihadists, and other Commonwealth of Independent State countries are fighting in Syria, Iraq and Afghanistan. On Dec. 4, the potential of radicalization in the northern Caucasus became more apparent after a terrorist attack in Grozny, the capital of Chechnya, where the situation had been rather calm of late. It has been reported that a group of Chechen militants intent on a major attack had been stopped by police, whom they killed, and then took over the Media House and began to trade fire with the police, killing 14 and wounding 28. Most of the militants were killed.

This development in the northern Caucasus is clearly linked to the situation in the Middle East — there are a lot of Chechen jihadists fighting in Iraq and Syria — but a Ukrainian connection has unexpectedly emerged as well. Three members of the Supreme Rada (Ukraine’s parliament) spoke in support of the terrorists, calling them brothers and allies. Igor Mosiychuk, the former commander of the Azov battalion in Donbas, said that Ukraine must support “opening fronts in the Caucasus and Central Asia.” The residents of Kiev were called upon to take to the streets in support of the Chechens. Essentially, a few Ukrainian parliamentarians have urged their compatriots to fraternize with extremists who have been fighting against service members of one of Ukraine’s supporters — the United States — in the Middle East.

A new spin also developed in the operations against the Islamic State (IS) with Iran launching airstrikes in early December against parts of Iraq controlled by the jihadists; there had earlier been some sporadic air raids. Two things are worth noting in this regard. First, Iranian and Iraqi authorities have both confirmed that the Iranians launched the strikes “at the request of the Baghdad government.” Second, there was no coordination with the United States; the Iranians only conferred with Iraqi authorities. Another telling signal is that although US representatives expressed concerns, their tone was tepid.

These developments have prompted Russian analysts to ask once again whether Russia, faced with these circumstances, is prepared to join, in some form, the coalition fighting IS. Most experts respond in the negative. It will be recalled that on Oct. 20 Lavrov said Moscow was prepared to establish a coalition to oppose the extremist group, but that it should be done through the UN Security Council on the basis of international law. He further stated that making “a fight against terrorism subordinate to the geopolitical interests and the desire to punish disagreeable regimes is not quite right and even immoral." It is unlikely this assessment has changed.

Russia, of course, is closely following the fight against the jihadists in Iraq and Syria. When US President Barack Obama said the war against IS might last a long time, he was probably taking into account experiences from the failed US wars and campaigns in the Middle East, for which he is frequently criticized by opponents at home. Perhaps the most graphic description of war in Iraq was that by Sen. Tom Harkin, D-Iowa, who said in 1991, “The Gulf War was like teenage sex. We got in too soon and out too soon.”

One can only hope that the coalition’s operation against the jihadists will not make us ponder the kind of problems that people face at an age when “getting out” successfully is almost impossible.