Europe ramps up push for peace

Israel's indifference to a generous financial, economic and defense package offered by the European Union, combined with the failure of the US peace initiative, have persuaded the Europeans to change the rules of the game and seek a proactive peace. 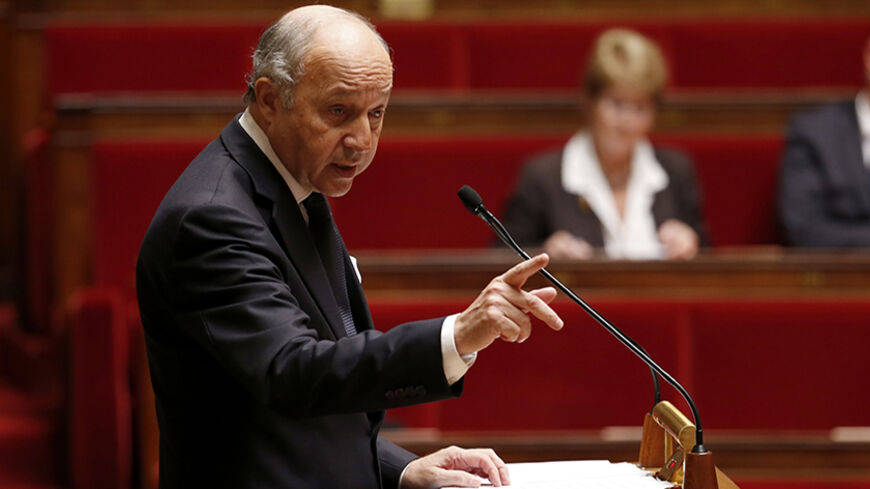 French Foreign Minister Laurent Fabius delivers a speech during a debate on Palestine status at the National Assembly in Paris, Nov. 28, 2014. - REUTERS/Charles Platiau

One can assume that the background material presented to US Secretary of State John Kerry in preparation for his Dec. 15 meeting in Rome with Israeli Prime Minister Benjamin Netanyahu included choice comments made by Netanyahu’s partner in government and in the Likud Party, Defense Minister Moshe Ya’alon, regarding the administration of which Kerry is a senior member.

Israel Army Radio aired a recording Dec. 10 in which Ya’alon explained the reason for what his listeners consider the excessively slow pace of construction in the settlements. The minister told rabbinical college students in the Etzion settlement bloc that the slow construction stems from pressure on the part of the Barack Obama administration and urged the youth, impatient to pour additional cement into the settlement construction cauldron, to bide their time. He remarked that the government was being careful “not to antagonize” the United States too much and ended his remarks by expressing his relief that the days of the current administration in Washington were numbered. “This administration won’t be around forever,” he told his listeners.

Ya’alon’s recording exposes Netanyahu’s “diplomatic horizon”: elections in the United States, on the one hand, and elections in Israel, on the other. Behind closed doors, Netanyahu refers to President Barack Obama as Jimmy Carter — the former president considered by the Israeli right wing to be a Palestinian agent after daring to call the occupation “apartheid” in his 2006 book, “Palestine: Peace not Apartheid.” Like Ya’alon, Netanyahu is counting on the assessment, or hope, that in a little over two years, his Republican friends, who conquered Capitol Hill in the 2014 midterm elections, will retake the White House as well. Then, the Americans will stop going on and on about freezing settlement construction, a permanent arrangement with the Palestinians and similar left-wing hallucinations. All he has to do is maintain his grip on power for another term and form another settlers’ government under the guise of the 2009 Bar-Ilan speech.

For now, most of Netanyahu’s efforts are directed at persuading Kerry, and through him Obama, to defuse the land mine in the proposal that the Palestinians plan to bring to a UN Security Council vote this month. This land mine is the proposed recognition of the June 4, 1967, lines as the basis for the permanent border between Israel and Palestine. The 1967 borders are considered by the Israeli political right, and even some in the center, to be “Auschwitz borders,” an expression attributed to Labor’s late Foreign Minister Abba Eban, signaling Israel’s annihilation.

Outside interference in any one of the central core issues of the conflict would constitute a step back from the position held by the United States since the start of the diplomatic process, according to which all arrangements that do not receive Israel's agreement beforehand will not be imposed. American support, even if only passive, for a Security Council resolution on the fate of the territories and East Jerusalem will drag Netanyahu into a public confrontation with the United States.

Netanyahu’s problem is that this time, the diplomatic process is being conducted away from his home court — Congress and the American Jewish community. France has taken the position of co-pilot, next to the United States. Paris made its move with the blessing of the United Kingdom, France’s European neighbor among the permanent seats on the Security Council, and with the backing of Spain, Sweden, Ireland and European Union institutions in Brussels. (Germany probably supports the US position.)

In a Nov. 28 speech to the National Assembly, French Foreign Minister Laurent Fabius said that things will no longer be the same. According to him, the negotiations that Kerry led have come to an end. “We want to avoid the pitfall of endless negotiations, which would take what has already been achieved over years back to square one,” he said. Fabius attributed the growing tensions in the territories and in Jerusalem to domestic politics that undermined attempts to reach an agreement through direct negotiations with US assistance.

Hinting (in a rather conspicuous manner) to an imposed framework, Fabius said, “Clear parameters for resolving the conflict adopted by the international community in advance will provide the basis for future negotiations.” He did not hesitate to mention international pressure. At the same time, France is seeking ways to present the Israeli voter with an enticing package of dividends to break the domestic political tie. Before the elections, Paris seeks to convene an international conference centered around the Arab Peace Initiative, which will celebrate its bar mitzvah (13th birthday) in March 2015 but has yet to receive Israel's official blessing. The French are encouraged by the public support of Labor Party leader Isaac Herzog, former Justice Minister Livni, former Finance Minister Yair Lapid and Foreign Minister Avigdor Liberman for the initiative, the thrust of which is normalization of relations with the Arab states in return for Israeli withdrawal to the 1967 lines, with possible land swaps.

Even when Europe went out of its way to help Israel, the Israeli right did not cease denigrating it. According to findings of a poll by the Mitvim Institute, some of which were discussed in Al-Monitor on Dec. 10, no more than 14% of Israelis had heard of the European Union decision from December 2013 to grant Israel (and the Palestinians) an unprecedented financial, political and defense package if Israel were to sign a peace agreement. The package includes upgrading relations to those of “a special, preferential partnership,” the highest level bestowed on a non-EU member state. The indifference with which this generous initiative was met by official Jerusalem, alongside the failure of US policy, brought home to the Europeans the need to change the rules of the game.

The question is not whether a new game will begin, but when. Will it start after the elections in Israel or even before that? Herzog and Livni have convinced top administration officials in Washington that recognition of a Palestinian state based on the 1967 lines, passed with a US abstention at the Security Council, will push Israeli voters into the arms of the right. On the eve of his meeting with Kerry, Netanyahu had already started playing that card, part of the scare propaganda at the heart of the right-wing election campaign. Just before boarding a plane for Rome, he told reporters that such a move will “bring terror to the heart of the country.”

On the other hand, the Israeli center-left and elements in Washington worry that if Netanyahu succeeds in persuading the Obama administration to veto the Palestinians' UN proposal, thus exchanging blows with France, Netanyahu could pat himself on the back for another victory “over the international community.” The Israeli public will thus be convinced that the right is able to get the tail to wag the dog and lead it along its route.

That is why Livni, during a Dec. 13 guest appearance on the Israeli satirical program “State of the Nation” (Matzav Ha’uma, in Hebrew), on Channel 2, called the Palestinians “idiots.” There are those who would argue that the Israelis who refuse to recognize a Palestinian state and gamble on the future of the Jewish state are actually the idiots.