Iraqi security officials are on high alert against Islamic State attacks during the holidays, but Iraqis appear to be going about business as usual. 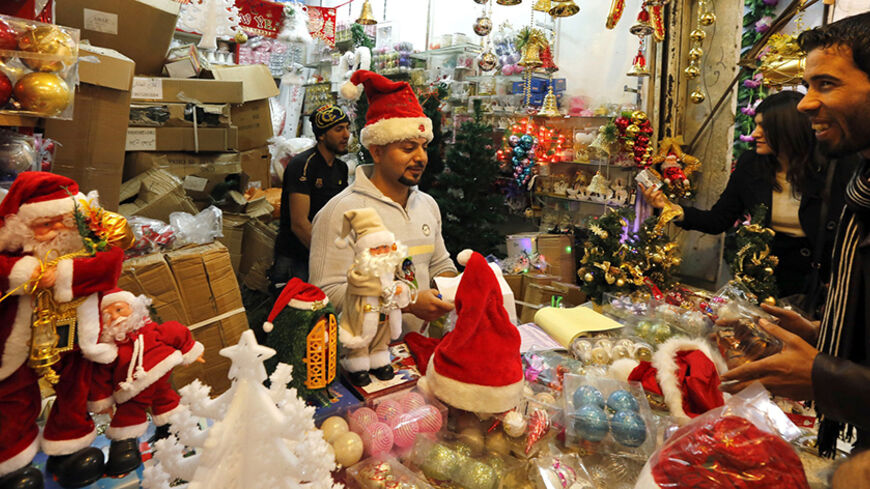 Father Christmas has been spotted in various locations in Baghdad, hanging out at a coffee shop or at the entrance to a huge mall, where people gather around him and a Christmas tree, posing for pictures.

“In a city like our city, you need to live for the moment,” said Mahmoud Musawi, a father taking pictures of his son Adam in front of the tree. In Musawi's eyes, “There’s nothing that guarantees I’ll be here next year to add color to the life of my son, so I want to live it to the maximum.”

The scene at the mall says a lot about how much the people of Baghdad thirst for bits of normal life in a city that has for decades been considered an icon of death.

Amir, an employee at one of Baghdad’s few five-star hotels, was busy putting up New Year’s Eve party decorations at his workplace, when we met. “Every year, we celebrate Christmas and the New Year. This is not new here at the hotel. What is unusual is the way ordinary people are reacting to the season. Maybe it’s their way of showing their rejection of all sorts of extremism.”

Amir mounts a group of balloons on a wall that together read, “Good Bye 2014” and then looks at me with a smile. “We know that 2015 won’t be better. You too know that well. Mosul is not coming back, nor is Iraq returning to what it used to be. The explosions are not going to stop. We are only changing digits.”

Indeed the explosions have not stopped despite the efforts of the security forces. The main challenges are now Christmas and New Year’s Eve. The Iraqi security services are concerned the Islamic State (IS) might launch attacks to terrorize people celebrating the holidays.

“Everything is expected, so our forces are on high alert, the same as they were last week during the commemoration of Imam Hussein’s 40th day [Arbaeen],” a security official told Al-Monitor. He added, “It won’t be an easy task to spoil people’s night. Iraq’s police and army heroes are ready to do anything to prevent such attacks.”

Despite the concerns expressed by security officials, the streets of Baghdad are crowded with people. Restaurants, coffee shops and malls are packed with seemingly carefree customers, unconcerned about security warnings and even incidents that have taken place nearby that could portend further danger for them.

As an example of this, an explosion on Dec. 20 in central Baghdad’s Karada Dakhel neighborhood left four people injured. I was at a coffee shop a few hundred meters from where the bomb detonated. The sound of the explosion wasn’t so big, but it was clear and loud enough to let people know what was happening. People in the shop stood up to see what had happened, but in less than three minutes they were back at their tables, and the shisha soundtrack returned to their ears.

That same day, I met Udai, a fighter with Asaib Ahl al-Haq, a Shiite group. Udai’s experience as a combatant dates back to the days of Saddam Hussein. “I fought with Saddam and against him, and now I’m with the government against Daesh [IS],” he said. “I had several injuries fighting in Syria against the Salafi Wahhabi groups and later here in Iraq. I was near the airport when I got shot by a group trying to kidnap someone in the car with me.”

Udai hates the Baath Party, but thinks Iraq’s best days are behind it. “The country is now divided, and we aren’t illusionists to [make you] think a united Iraq will emerge. Nothing is going to be as before.”

I asked Udai why he had fought in Syria and why he is now back in Iraq. He replied, “We thought we were stopping them there, but it seems they were underestimated. It’s all because of the Iraqi Baath Party, whose remnants revived IS.”

There’s a Baath Party in Syria as well, so I asked, what’s the difference? Udai responded, “I’m fighting for my existence, for my people and my religion. I don’t care for Bashar al-Assad or his party. What I care about is my country’s security, and unfortunately, despite this fight and all our friends who have died here, we are today fighting near Baghdad.”