Weak institutions and corruption mean that major crimes in Iraq are not being investigated or prosecuted. 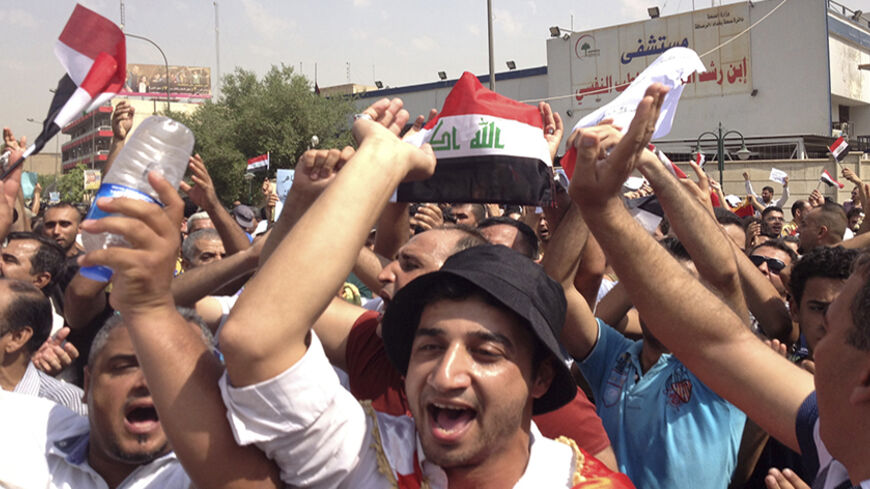 Protesters rallying against corruption demand that the pensions of parliamentarians be canceled during a demonstration in Baghdad, Aug. 31, 2013. - REUTERS/Thaier al-Sudani

In 2014, Iraq suffered significant terrorist activity, even including high treason, that led to the fall of Mosul and Tikrit to the Islamic State (IS) in April 2014. In the same month, at the Speicher military base, IS forces captured and executed 1,700 army cadets. Six months later, officials have yet to determine whose negligence allowed these crimes to happen or to punish those responsible for the violence.

It seems that both crimes will be forgotten and their perpetrators unpunished, as was the case for dozens of others committed in Iraq in the past few years. The kidnapping of the Iraqi Olympic Committee in July 2006, 150 members of a delegation from the Ministry of Higher Education and Scientific Research in December 2006 in Baghdad and the national Taekwondo team (which was killed) in 2006 are just a few examples on these forgotten crimes.

In the subsequent years, many other crimes, such as raiding prisons to free prisoners and robbing banks, have occurred in Iraq. When investigations were inconclusive, the perpetrators went unpunished. On Sept. 10, parliament member Abdel Hussein al-Musawi revealed that a group was even working to smuggle the perpetrators of the Speicher execution out of Iraq.

In its 2014 report, Amnesty International said that impunity in Iraq is absolute. For the sixth year in a row, the Committee to Protect Journalists put the rate of impunity for the crime of killing journalists in Iraq at 100%, with 10 journalists killed in 2013.

It is clear that the weak judicial system in Iraq is not the only cause of the issue. There are other factors, some political and some are related to corruption, both political and administrative. Asaad Ghali, a professor of law and director of the human rights research unit in Qadisiyah University, told Al-Monitor he believes that corruption in all its forms — political, administrative and financial — is strongly correlated with this phenomenon. The higher the corruption index is, the higher the rate of impunity. However, according to Ghali, the main catalyst of this phenomenon is the nature of the political system in Iraq, especially the political quotas.

The political process in Iraq is governed by a group of parties that have common interests and cover each other's corruption.

The Iraqi population largely believes that political quotas are one of the reasons behind corruption and the spread of sectarianism. Media campaigns and slogans in protests and rallies commonly call for the end of the political quota system.

The quota system reinforces the influence of parties and weakens the ability of judicial and regulatory bodies to carry out their tasks. Ghali affirms that Iraqi parties use corruption as a tool of political pressure, with each party threatening to expose the crimes of the other. As a result, parties connive with each other to sweep transgressions under the rug. Exacerbating this phenomenon is Iraq's weak regulatory system, which does not have the power to expose dysfunction in the performance of governmental bodies.

Iraq is dealing with clear dysfunction in a judicial system that fails to punish offenders while allowing innocent people and oppositionists to be persecuted. Human Rights Watch produced a lengthy 2013 report on violations of the judicial system in Iraq, describing the system as "broken."