In a new book, former New York Times correspondent Nazila Fathi intertwines her personal and professional experiences after the Iranian revolution, including the challenges of covering the Islamic Republic for two decades. 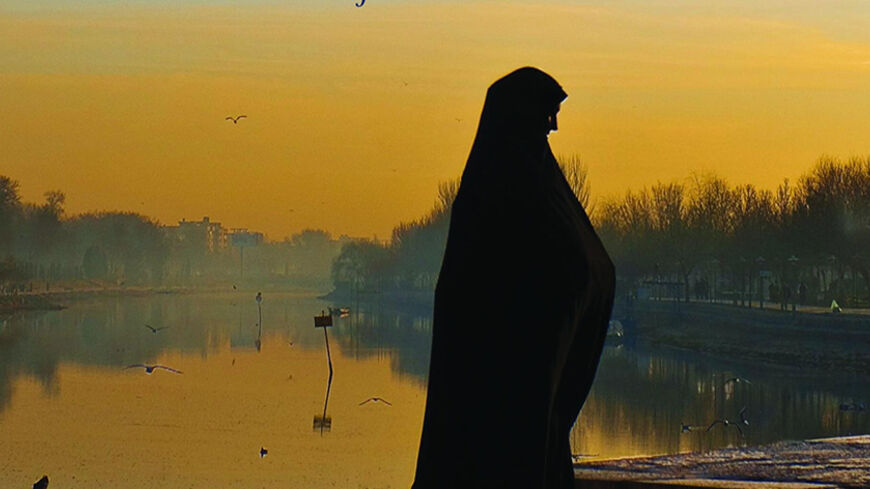 The jacket illustration of "The Lonely War" by Nazila Fathi is seen in this undated photo. - Basic Books/Nazila Fathi

Journalism in Iran has never been for the fainthearted. But the challenges of covering the country as a local hire for the foreign press are especially complex, as former New York Times correspondent Nazila Fathi recounts in a moving new memoir, “The Lonely War.”

In April 2009, before the disputed presidential elections that consumed the country and sent Fathi and many other Iranians into exile, she asked the director of the office for foreign press to send local and special security police to her home in Tehran to protect her against a third force, the Islamic Revolutionary Guard Corps (IRGC), who were monitoring her movements. Fathi had just fired a long-time maid who had been coerced by the IRGC to spy on her; the Guards evidently did not trust the other security services to keep Fathi in line.

Such are the layers of complexity that characterize post-revolutionary Iran that Fathi eloquently describes.

In an interview with Al-Monitor, Fathi said that she was not “emotionally ready” to write the book after first leaving Iran. But literary agents approached her in early 2010 after she published a piece in The New York Times about the circumstances of her exile and she realized she had an important story to tell.

Her intention, she said, was “to present the human face of Iran — whether pro- or anti-regime and also the demographic changes” that have transformed the country from one with a huge rural population to one that is largely urban and middle class.

The Arab uprisings of 2011 gave her another incentive, she said. While “there are many similarities, the biggest difference was that Iranians had already had a revolution” whose destabilizing impact was “still very much remembered.” Iranians, while unhappy with the status quo, want change without an “institutional breakdown or insecurity,” she said.

In the book, Fathi recounts her own sense of shock at the sudden loss of personal freedom after the revolution and the exhilaration of small victories against the theocratic state.

Just shy of nine when the revolution took place, Fathi had had a happy childhood playing in the garden of her apartment complex and swimming every summer in a refreshing pool. The revolution put an end to that innocent pastime and forced her to wear hijab, including a nylon scarf knotted under her chin, which she found suffocating.

Her “first public act of rebellion” came when she and other pre-adolescent girls went swimming in the pool one night despite the ban, she writes. “Decades later, the memory of that swim still resonates in my mind with a sense of satisfaction” as a small victory in a war in which “our bodies had become battlefields.”

Fathi also describes the terror of living in Iran during the 1980-88 Iran-Iraq War and the relief that came when Ayatollah Ruhollah Khomeini, the leader of the revolution, accepted a cease-fire with Iraq. It was, she writes, “the happiest day of my life.”

His death a year later ushered in optimism that Iran was about to become a less repressive and isolated country — a hope that has risen and been dashed repeatedly over the next two decades, most recently last month, when a year of high-level talks failed to achieve a comprehensive nuclear agreement easing Iran’s pariah status.

Fathi writes that she first became interested in journalism after watching a televised news conference with foreign reporters allowed into Iran to cover the funeral of Khomeini in 1989. Fathi was fascinated when then-presidential candidate Akbar Hashemi Rafsanjani admonished Geraldine Brooks, at the time reporting for the Wall Street Journal, for wearing a conservative black abaya. “Why do you wear that heavy veil when a simple scarf would do?” Rafsanjani asked.

Fathi remembered the news conference a year later when she was asked by a tutor to help other reporters who had come to Iran to cover the aftermath of a devastating earthquake. Rafsanjani had chosen a foreign journalist to send the message that he was a relative moderate, “knowing his words would travel farther through Brooks than if they were spoken to an Iranian reporter,” Fathi wrote. “Journalism, I could see, was a powerful profession — and the idea of entering it in any capacity thrilled me.”

Fathi soon graduated from translator to fixer to full-fledged correspondent during two decades of intense ferment in Iran in which the press played an important role. The book intertwines her personal experiences of marriage and motherhood with the major events of the period, including the rise of the Reform movement under Rafsanjani and Mohammed Khatami and the harsh backlash that followed.

Despite setbacks including the so-called “chain murders” of intellectuals and the impeachment of Khatami ministers and closure of newspapers, society continued to evolve. “The great reshuffling of fortunes and fates” that marginalized Iran’s former ruling class in favor of the rural and urban poor did not stop this trend, Fathi writes, because the children of the poor became educated and aware of the regime’s hypocrisy and failings.

Fathi describes how technology fueled this evolution, from videotapes of foreign movies distributed by bootleggers in the 1980s, to satellite TV and the Internet in the ’90s and the cellphones used in the 2009 protests to record and transmit images of the crackdown on peaceful protesters. The government found it could not block the technology without completely handicapping its own work, so Iranians kept finding space between the cracks. Just recently, she remarked to Al-Monitor, tens of thousands of Iranians came out on the streets to mourn the death of a young pop star. “Iranians are constantly sending signals to the regime,” Fathi said, that they are not satisfied with the status quo.

Foreign journalists who go to Iran understand that they are under surveillance but the Iranians who work for foreign news outlets are particularly at risk. Fathi had numerous run-ins with assorted branches of the security establishment, including a mysterious “Mr. X” from the Intelligence Ministry who apparently came to appreciate her analysis of Iranian politics.

Beaten by Basij thugs while covering 1999 student protests and tear-gassed during the 2009 demonstrations, Fathi decided to leave Iran in 2009 after Newsweek correspondent Maziar Bahari was arrested and she was tipped off by a member of the Basij she had once interviewed that her picture had been given to snipers with orders to shoot.

Like many talented young Iranians, Fathi moved west, first to Canada, where she had lived for a time earlier in the decade, and then to the United States. Now settled with her husband and two children in a suburb of Washington, D.C., she writes that she does not know when she will be able to go home but hopes she will get the opportunity to see the mountains ringing Tehran and her old swimming pool. Writes Fathi: “I long to swim in those waters again.”