Statements by parliament member Ali Motahari have once again raised the issue of whether Iran's supreme leader can be supervised. 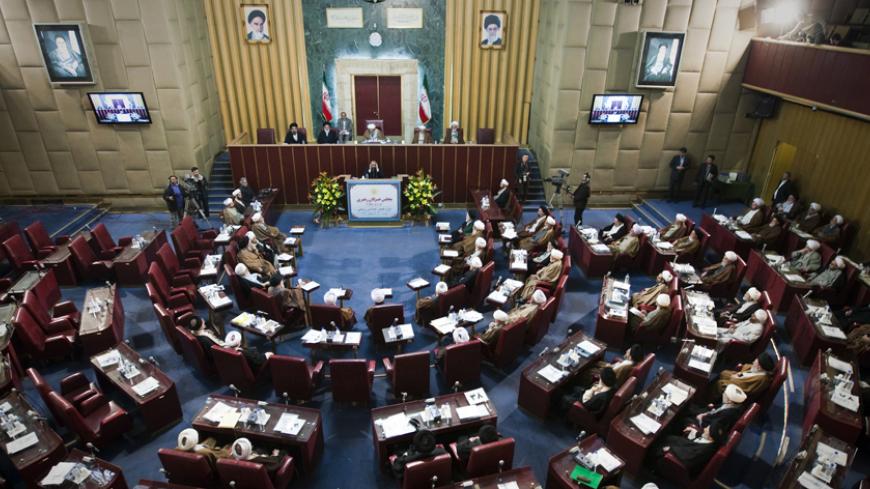 On Nov. 24, Ali Motahari, an outspoken member of the Iranian parliament and son of the noted Islamic scholar Ayatollah Morteza Motahari (1920-79), openly accused the Assembly of Experts of negligence. Motahari argued that the body, consisting of 86 elected Islamic scholars, is responsible for overseeing the actions of Iran’s supreme leader.

“We do not have individuals above criticism in the country,” he said. “The responsibility of the Assembly of Experts is to supervise the performance of the supreme leader and his subordinates, but we haven’t seen them approaching this subject.”

Ayatollah Ahmad Alamolhoda, Mashhad’s Friday prayer leader and a member of the assembly, fiercely countered Motahari’s assertions, saying, “The Assembly of Leadership Experts cannot supervise the leader’s performance because the leader [the guardian jurist] is the guardian of all [of us], and experts cannot supervise the performance of their own guardian … The leader is the guardian, and the experts are subjects of the authority … How can I supervise his actions when he is my guardian?”

Iran’s supreme leader, Ayatollah Ali Khamenei, has expressed two positions on this issue of supervision. In a 2000 gathering of university professors and students, he remarked, “No one is above supervision. Even the leader is not above supervision, let alone the organizations linked to the leader … Government by its very nature entails the accumulation of power and wealth. … As a result, they must be supervised. It is necessary to supervise government officials to make sure they resist their temptations and avoid corruption and misuse of public funds.”

In a 2006 interview, Ayatollah Ahmad Jannati, head of the powerful Guardians Council and a member of the Assembly of Experts, explained that the assembly had decided to establish a number of committees to supervise the supreme leader’s subordinates. These committees covered various categories, including the judiciary and defense establishment in addition to national radio and television, among others. Jannati said the committees were necessary to determine whether the organizational conditions required of the leader, including administrative capabilities, were sufficient. The assembly took its findings to Ayatollah Khamenei.

Jannati said, “We had several meetings with the leader and discussed the issue, [and] he was not agreeable [to the idea].” According to him, Khamenei said, “You have to examine my performance, not my subsidiaries'. “[If you conclude that] I have lost prudence … then you can take action.”

Then, in February 2012, Abbas Nabavi, a cleric with close ties to the influential and hard-line Ayatollah Mohammad Taghi Mesbah Yazdi, revealed additional comments by Khamenei regarding supervision. In a letter to the Assembly of Experts, Khamenei said, “Supervision must begin from the point of the presence of the conditions required for leadership. First you should examine to see whether the leader continues to have the requirements [as stipulated in Article 109 of the constitution] or not. If the answer is yes, then I do not accept that you should go into the minute details. If the answer is no, then you must provide the reasons, and, for example, say that a specific condition is not fulfilled.”

Based on this statement, Khamenei in general accepts the idea of supervision of the leader by the assembly. He limits it, however, to whether the requirements of the leader are being maintained. According to Article 109, the essential qualifications of the supreme leader are justice and piety, political and social discernment, prudence, courage and administrative capability.

Chapter 8, Article 111, of the Iranian Constitution reads: “Whenever the leader becomes incapable of fulfilling his constitutional duties, or lobs one of the qualifications mentioned in articles 5 and 109, or it becomes known that he did not possess some of the qualifications initially, he will be dismissed. The authority of determination in this matter is vested with the experts specified in Article 108.”

Many clerics support Ayatollah Khamenei’s argument that Article 111 does not imply micro-supervision. Rather, they maintain that the text only authorizes macro-level examination of the supreme leader's capabilities in general.

The oversight issue had been raised and discussed in 1989 during meetings of the Assembly for Revising the Constitution, a panel of 25 members tasked by Ayatollah Ruhollah Khomeini with preparing the draft of amendments to the constitution for a general referendum. Many on the panel, including Ayatollah Ebrahim Amini, were against the idea of the supreme leader being left to rule unsupervised. “No, really, how can the experts not supervise the performance of the leader and all of a sudden decide to dismiss him?”

According to the internal regulations of the Assembly of Experts, the seven-member Committee for Investigating and Supervising the Leader is tasked with providing advice to the supreme leader and with supervising the conditions and comportment of the leader on a continual basis. The committee reports to the assembly's presiding board and, if two-thirds of the board and committee members agree, the assembly members are called for an extraordinary session to discuss whether it should take action with respect to the leader.

Despite this oversight mechanism, the supreme leader can, based on his understanding of the reality of day-to-day politics, potentially nullify decisions by the assembly, as Khamenei did in the case of the subcommittees. Some may argue that Iran’s leader uses his authority to influence the assembly's decisions because the constitution's Article 57 places all three branches of the government — the executive, legislative and judiciary — “under the purview of the absolute rule and leadership” of the supreme leader. One could counter, however, that the Assembly of Experts is not under the jurisdiction of any branch and is, therefore, not subject to his oversight.

According to Iran’s official religion, Twelver Shiism, no one, excluding the Prophet Muhammad, his daughter and the twelve Imams, is divinely free from error and sin. This principle, with the recognition that the leader himself is not immune from sin and error, is said to justify oversight by the Assembly of Experts. The effect of this principle also appears in Article 107, which states: "The leader is equal with the rest of the people of the country in the eyes of law.”

Ayatollah Khamenei, however, speaking on the extent of the authority of the guardian jurist in a fatwa, said, “According to Shiism, all Muslims have to obey the order of the guardian jurist and submit to his commands. This edict even applies to other grand ayatollahs, let alone their followers.” The vision outlined in this fatwa potentially neutralizes religious arguments supporting the leader's supervision.

Against those who assert that the leader cannot be supervised because subjects cannot supervise their guardian, one could argue that Ayatollah Khamenei has stated that he does not reject supervision. In addition, oversight is, under Article 111's description of the Assembly of Experts' role, constitutionally enshrined. Also, given the widely held religious principle that no individual escapes sin and error, no religious obstacle remains in justifying the leader's supervision. Nevertheless, Ayatollah Khamenei’s interpretation of the role of the guardian jurist may supersede arguments supporting supervision.