Algeria is facing economic challenges that largely depend on the price of oil, and therefore President Abdelaziz Bouteflika is pushing Saudi Arabia to cut its oil production to force up prices, which would benefit Algeria. 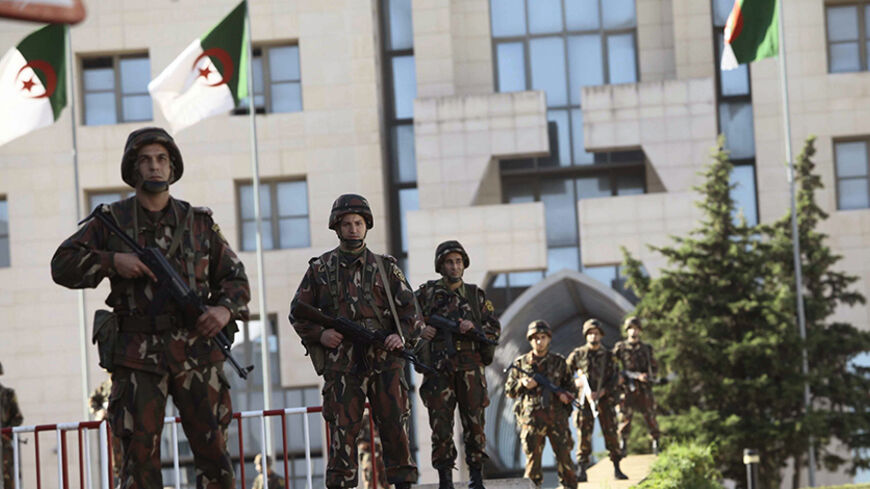 The Algerian Republican Guard is seen in front of the Presidential Palace in Algiers, Oct. 16, 2014. - REUTERS/Ramzi Boudina

The Algerian regime faces tough decisions this winter as it copes with falling revenue and low oil prices. President Abdelaziz Bouteflika has called the situation "worrisome" and is pushing Saudi Arabia to cut its oil production to force prices up.

The last Arab republic without an Arab Spring, the People's Democratic Republic of Algeria is one of the most opaque police states in the world. At 77, Bouteflika is serving his fourth term despite suffering from a stroke in 2013. He rarely appears in public and often travels to France for health reasons. Behind the scenes, the army's generals and the intelligence chief wield enormous power and are referred to as "le pouvoir." Decision-making is a mystery.

Oil and natural gas sales are key to the economic prosperity of the almost 40 million Algerians, 70% of whom are under the age of 25 and 30% are younger than 15. Unemployment and underemployment are severe, and housing shortages are endemic. Fortunately, the government has $190 billion in reserves to cover deficit spending.

Last weekend, the government announced the first of what is expected to be many cost-cutting measures. Public sector job hiring will be frozen in 2015. The public sector is Algeria's largest employer, covering 60% of the job market. Infrastructure projects such as highways are expected to be shelved next, and extensive subsidies for electricity and education are also in danger of cuts.

The oil minister called for OPEC to cut production to stop the decline in oil prices. In practice, this means calling for Saudi Arabia to cut its oil production of 9.6 million barrels per day, something the kingdom has ruled out. With over $750 billion in reserves, King Abdullah bin Abdulaziz is content to let oil prices stay low for now and drive alternatives such as shale oil production out of business. Algeria is more desperate.

The last time oil prices crashed for an extended period in the 1980s, it set the predicate for Algeria's disastrous 1990s. Massive unrest and elections won by Islamists provoked a military coup that led to a prolonged civil war in which at least 160,000 died. Algeria's KGB-trained intelligence czar, Gen. Mohamed Mediene (aka Toufik) played a key part in the 1992 coup and has been the head of the Intelligence and Security Department ever since. He has run the secret service longer than any other intelligence chief in the world. Memories of the horrors of the civil war have been crucial to discouraging an Arab Spring in Algeria for the last four years. High oil prices were also critical, allowing the welfare state to buy off unrest.

The "pouvoir" is not likely to cut military or security expenditures. The defense budget has doubled in the last decade to over $10 billion in 2014, the highest in Africa. The 2015 budget allocates $13 billion for defense and another $7 billion for the Interior Ministry, a total of $20 billion for security. Over 500,000 soldiers, gendarmerie and police are on active duty.

The generals see danger at every corner. Morocco is the historic enemy and the Western Sahara dispute a long-standing sore. The collapse of the state in Libya and the ongoing civil war is a major concern. The 2013 attack on the In Amenas gas plant by Mokhtar Belmokhtar's al-Qaeda spin off was staged from Libya. Belmokhtar is believed to be hiding in Libya and planning further attacks. The mainstream al-Qaeda in the Islamic Maghreb remains a terror threat at home. The Sahel states are all weak and dependent on French military power. Algiers is habitually skeptical of France and Paris' intentions in Africa.

Memories of the 1990s, an efficient and omnipresent police state and high oil prices have kept unrest from threatening Bouteflika for four years. The regime's leadership weakness has been masked by generous welfare payouts. The $190 billion in reserves are a cushion, but look for Algiers to press Riyadh for assistance with increasing urgency.

Saudi Arabia is not close to Algeria, and the Saudi royals much prefer Morocco. But King Abdullah does not want to see the Arab Spring revived in the Arab world. The Saudis backed the Algerian generals in the coup two decades ago and persuaded the United States to do the same. The king will watch Algiers carefully this winter.